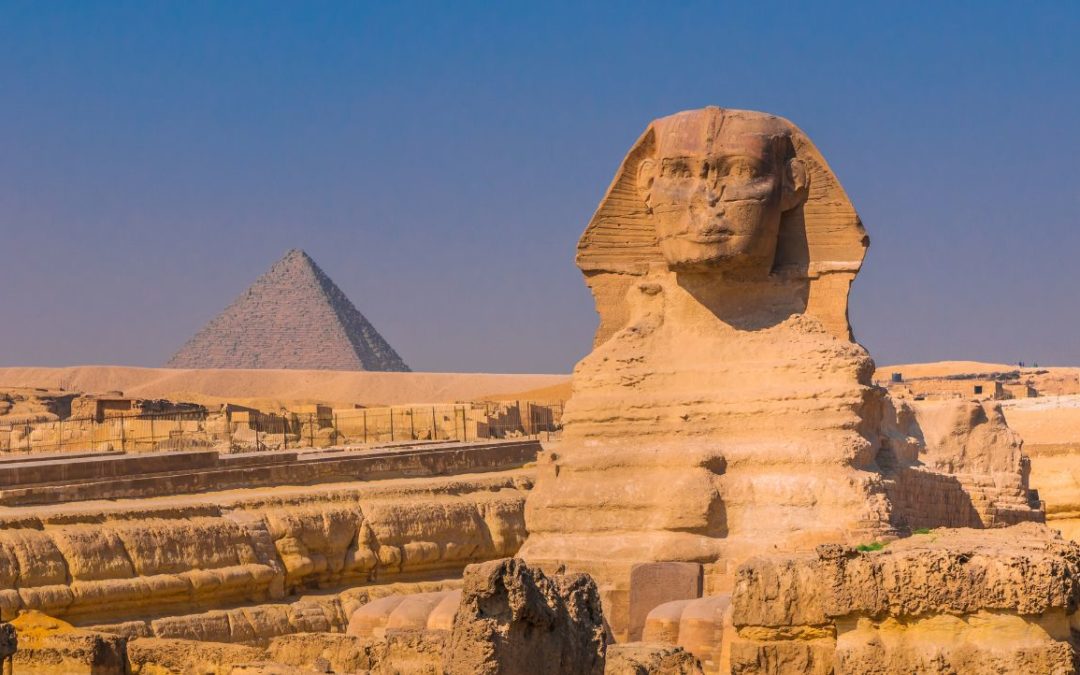 The true age of the Sphinx and the pyramids is a subject that has been widely discussed for a long time amongst historians, archaeologists and geologists. There is no concrete evidence which can tells us exactly how old these structures are. A lot has been lost in the centuries that have passed due to various reasons – natural disasters, robberies, scavenging, etc. Some structures are still covered with a thick layer of sand or soil, still waiting to be discovered.

Mainstream history puts the construction of pyramids and the Sphinx during the Fourth Dynasty, in 3rd millennium BC. The most popular interpretation is that they were built to express piety and to serve as tombs for kings and pharaohs. Evidence which conflict with the accepted chronology has been discarded or interpreted not to fit into the established model.

As our knowledge and technology develops mounting pile of conflicting evidence grows bigger, suggesting that some interpretations might be wrong. What has especially plagued scientific mind in the last few centuries is the idea of continuous development. The notion that humanity gradually developed into today’s modern society over the course of 10 000 years has been dominant in history, archaeology and our culture for a very long time. We tend to believe that we are constantly developing, that all nature is constantly evolving to be better than it was yesterday. But what if we are wrong? What if human history is rather a cycle of evolution, devolution, oblivion and remembering, than a story of continuous progress?

Strong doubts in the current Ancient Egyptian chronology were caused by a prominent new theory that emerged in the last few decades. John Anthony West, an author, lecturer and an alternative Egyptologist was inspired by the works of R. A. Schwaller de Lubicz; de Lubicz suggested that traces of water erosion on the enclosure wall indicate that Sphinx is older than what mainstream chronology tells us. West sought an opinion of an expert, so he invited Robert Schoch, a geologist and associate professor at Boston University, to come to Egypt and give his opinion about the weathering. Schoch almost immediately recognized signs of a prolonged and massive rainfall at enclosure walls. The weather in the Old Kingdom was almost the same as today (hot and dry, with very little rain), so there wasn’t enough rain in the last 5000 years to cause that kind of weathering.

Considering that the last period of heavy rainfall in Egypt ended during the late 4th and early 3rd millennium BC, Schoch gave at first, in his own words, “a very conservative estimate” that the Sphinx was constructed between 7th and 5th millennium BC, but later he changed that estimate to at least 9700 BC – the end of the Younger Dryas. Based on Paleoclimatic data, he hypothesized that the Sphinx was carved before the end of the last ice age, during what he called an ”earlier cycle of civilization”. Schoch believes that there was a catastrophic event – a solar eruption – which caused natural disasters all over the Earth, and consequently the collapse of advanced civilizations that lived at that time. People who came during the 6th millennium BC and built the Ancient Egyptian civilization, actually resettled the Nile Valley without having any knowledge who were the previous inhabitants. They gave the pyramids new purpose and a new meaning, as they didn’t know their original function. They felt that they were important, so they tried to preserve them by numerous repairs that occurred over the course of Dynastic Egypt. They also tried to copy the work of the ancients but they were not completely successful, explaining why younger pyramids are smaller and built with less skill.

If the theory is right, we are missing a big part of history. There either was another advanced civilization that already lived in the Nile valley when the farmers and herders settled around 6000 BC (which is highly unlikely, considering that there is no evidence of that), or there was a civilization which already witnessed its rise and fall before the settlers even came. Could it be that the pre-dynastic Egyptians were just as amazed and puzzled by the pyramids and the Sphinx as the first archaeologists who studied them? All archaeological evidence suggests that early settlers didn’t have the mathematical knowledge, technology, resources or organization required for building such structures.

Disproportionate size of the head compared to Sphinx’ body is explained by a theory that it was originally a head of a lion. It was later carved to represent the head of the pharaoh, but no one is certain when that happened exactly. It is not hard to imagine that the Sphinx was probably sitting by the Nile before the settlers came, already ancient, looking at the horizon to witness the rise of a new day and setting of the old one.

Another interesting thing is that the pyramids are considered to be tombs of the pharaohs, and yet there wasn’t a single mummy found inside. Remains of pharaohs were usually found scattered in the vicinity of the pyramids, but never inside. Pharaohs were usually found in rooms which had hieroglyphic inscriptions all over the walls, yet the walls of rooms and tunnels within the pyramid are plain. Judging by their design and shape, it is easily concluded that the pyramid wasn’t built to serve a purpose as a tomb. There is an utilitarian feeling – like it was built to have a practical purpose rather than a sacral one. There are a lot of theories trying to explain the real purpose of the pyramids; some say that they were used for generating energy or for healing practices and some say it is used to keep ancient knowledge within its hidden rooms. Considering the structure of the Great Pyramid, all of these explanations sound more probable than the idea that they were tombs.

There are many unanswered questions, and the mainstream chronology is crumbling with each new evidence. New insights will probably not just change the history of Egypt, but entire history as we know it.

* The opinion expressed in this article does not necessarily reflect the official views of NirvanicInsights on this specific topic. This was written by an anonymous contributor and we thought it could prove useful to learn more about alternative opinions concerning ancient Egyptian history.