Animal Spirits and Totemism From Around the World 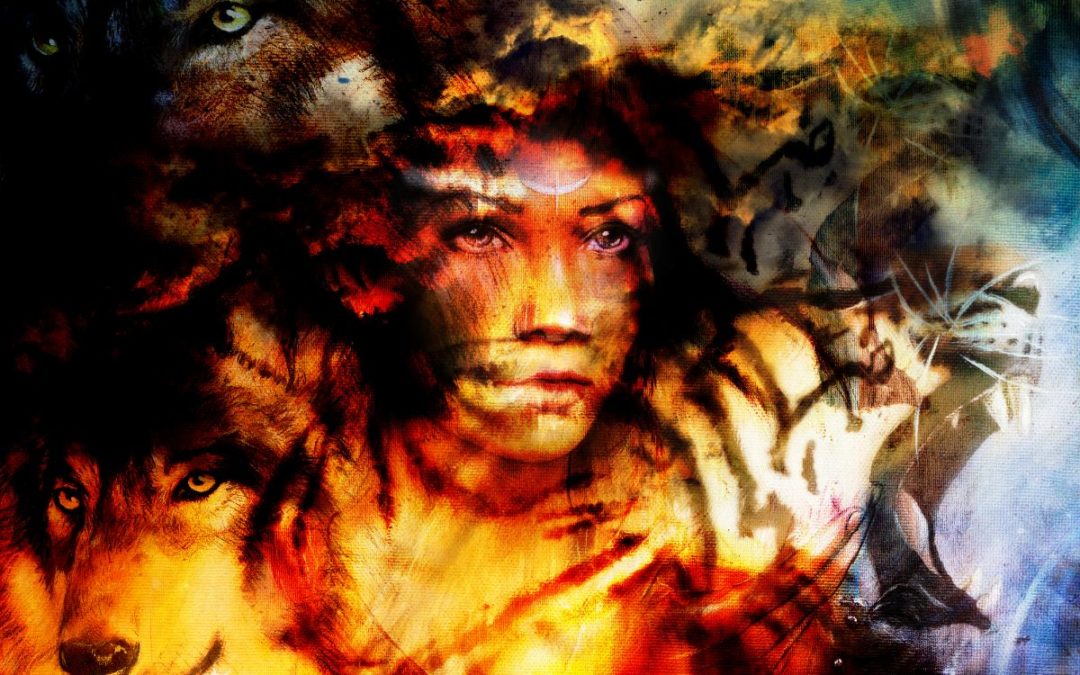 An animal spirit is said to mirror the traits associated with a specific animal. A person who shares the characteristics with a certain animal is believed to harness that animal’s energy and that that animal is their animal spirit. A totem is a spirit being, sacred object, or symbol that serves as an emblem for a group of people such as a family, clan, lineage, or tribe. The totem animal acts as a guardian spirit staying with an individual for the duration of their life.

The term totem is derived from the North American Ojibwe language, however belief in tutelary spirits and deities is not limited only to Native Americans but is common in many cultures across the world. Some indigenous groups even imported the Ojibwe term “totem” to describe a pre-existing and independent practice. The concept of using totems demonstrates the close relationship between animals, humans, and their shared environment. Anthropologists believe that totemism was a universally practiced phenomenon, according to Scottish ethnographer John Mclennan (1827-1881) the entire human race has passed through a totemic stage at some point in the distant past. The following are examples of animal spiritualism and totemism from around the world. 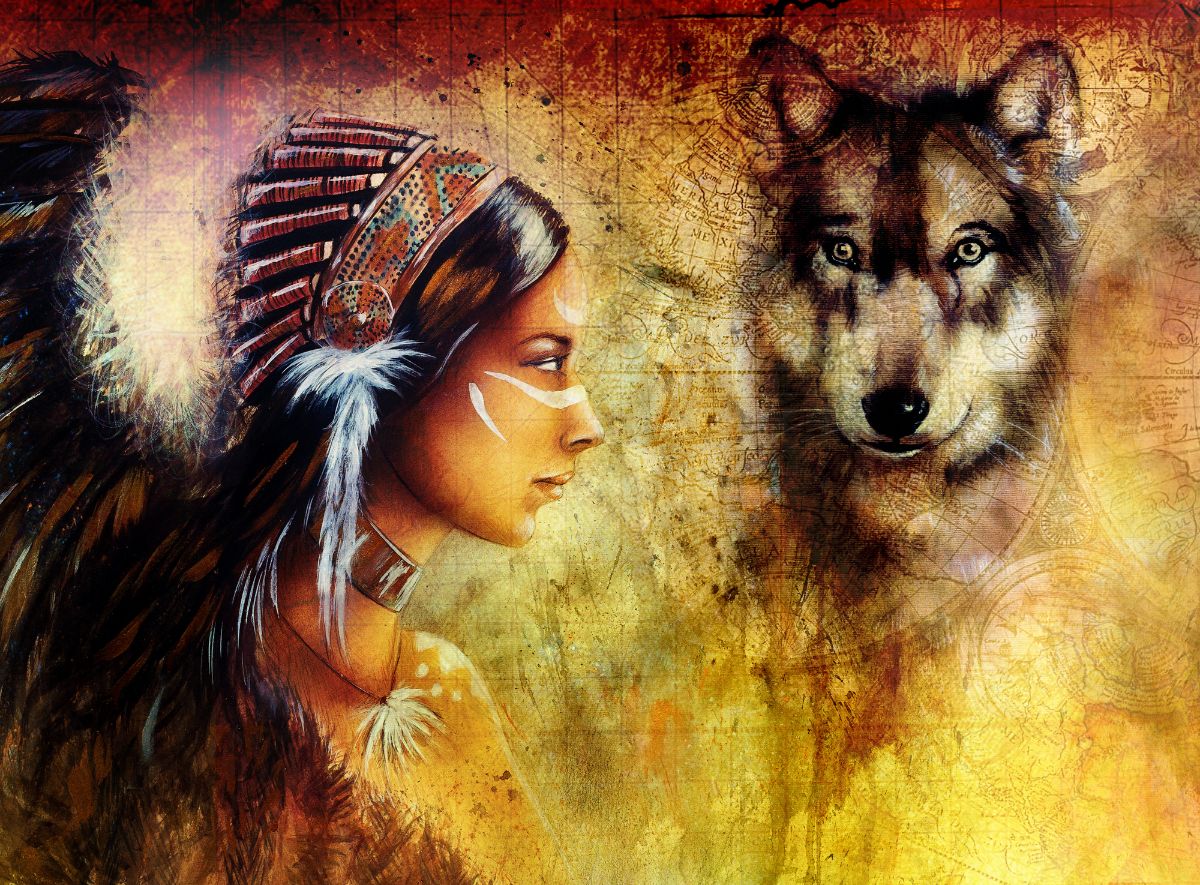 Native American spirituality respects and honours animals as fellow inhabitants of the earth. According to Native American beliefs spirit animals are not determined through astrology or birth dates, as the spirits choose their people not the other way around. Someone seeking their spirit guide would normally first ask the spirit to show itself. Once the intention is made the spirit animal might be discovered through dreams, meditation, or an encounter with the animal’s physical counterpart. Some Native American people like to incorporate images of the animal in their dress and decorations around their homes. It is believed that the animal spirit is greater than the actual animal because it embodies the essence of that animal. For instance, a wolf spirit is not just one individual wolf but rather the voice of all the wolves that have ever lived. After discovering the animal spirit, it is recommended that the animal is studied. Merging the animal spirit within one’s own will allow them to call upon its energy when needed.

While everyone has their own individual spirit animal, every Native American tribe also has a group of spirit animals that are most prevalent among the people which are referred to as tribe totems. The spirit animals of a tribe are believed to live in the local area inhabited by the tribe and to have great medicine power. Totems are important to the life of the tribe and act as guides to sources of food, fresh water, and other essential items.

The Native Americans on the Northwest Coast have a tradition of creating totem poles in order to convey a family or tribe’s history. Totem poles are long pieces of wood, usually cedar which are covered in carved images of totems. The carver will include images of their own story, such as their position within the tribe. A large celebration called a “potlatch” accompanies the raising of a totem pole, where tribe members sing and dance to drums as the pole is raised. The animal images on the totem poles act as family crests reflecting the history of that lineage. 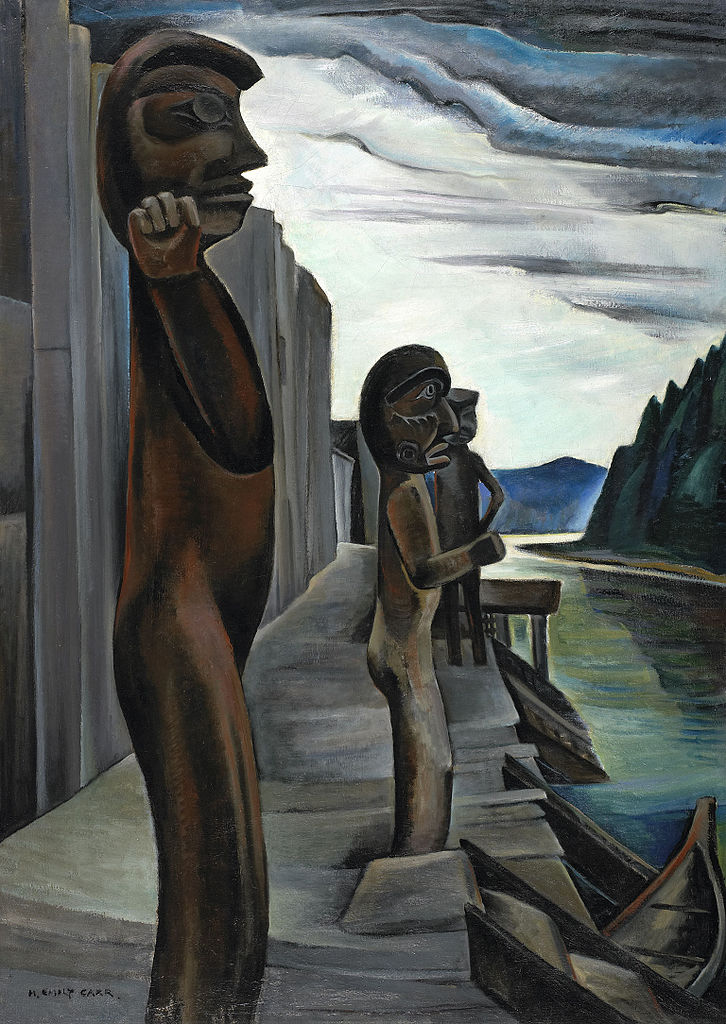 Painting by Emily Carr of totem poles that once stood on Blunden Harbor Kwatiutl village in British Columbia, representing mana or spiritual power (rather than spirit) in the village or clans within it, in this case the spirits of the ancestors instead of animals.

The indigenous people of Australia hold similar beliefs to the Native Americans. The indigenous Australians are the Aboriginal and Torres Strait Islander people, descended from tribes that existed in Australia and the surrounding islands thousands of years before British colonisation. The indigenous people believe that everything is interconnected including the plants, animals, landforms, and people which all have a spirit. In Aboriginal lore all living things were either the ancestors themselves or were made by the ancestors. The Dreaming is a word used to explain how life came to be, it is the stories and beliefs behind creation. These stories may explain why the echidna has spikes or why a rock formation is in a certain place. 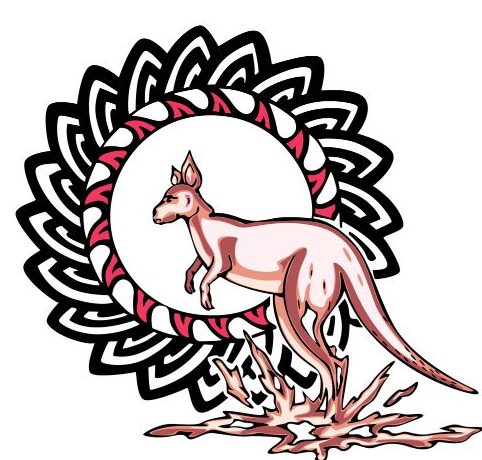 Totems also feature heavily in Aboriginal beliefs, a totem is a natural object, plant, or animal that is inherited by members of a clan or family as their spiritual emblem. Totems are used to define an individual’s role and responsibilities and their relationships with each other and creation. Totems are believed to be the descendants of the Dreaming heroes and there are strict prohibitions against eating animals or plants which are considered totems, breach of this taboo is said to carry sickness or death. Everyone is responsible for the stewardship of their totem including the flora and fauna of the local area. The stewardship consists not only of the management of the physical resources such as food and water, but also the spiritual management. This includes ceremonies and rituals to honour the spirits and to ensure adequate rain and food resources.

The Australian Aboriginal people believe that a child’s story begins even before they are born. As the child’s mother first becomes conscious of their first movements in the womb, she immediately takes note of the area, so that the baby will become identified with the spirit/s of that certain area. They believe that the child becomes inextricably linked with the spirit/s and that becomes their conception totem. After the child’s birth they automatically receive an additional skin totem and clan totem. Their spiritual responsibility in life is to learn the songs, stories, and dances associated with these totems. They also learn how to perform ceremonies in order to energise these spirits.

Similar beliefs can be found on the continent of Africa. Animal symbolism features throughout countless pieces of art, songs, and stories. Each animal is believed to hold a specific meaning and signifies certain qualities or characteristics. Several African tribes believe wearing animal carvings on their masks will improve their communication with animal spirits who live in the local area. The lion for example usually signifies strength both in personality and in physical ability. The lion represents courage, valour, and pride while his counterpart the lioness represents femininity, motherhood, and the moon. 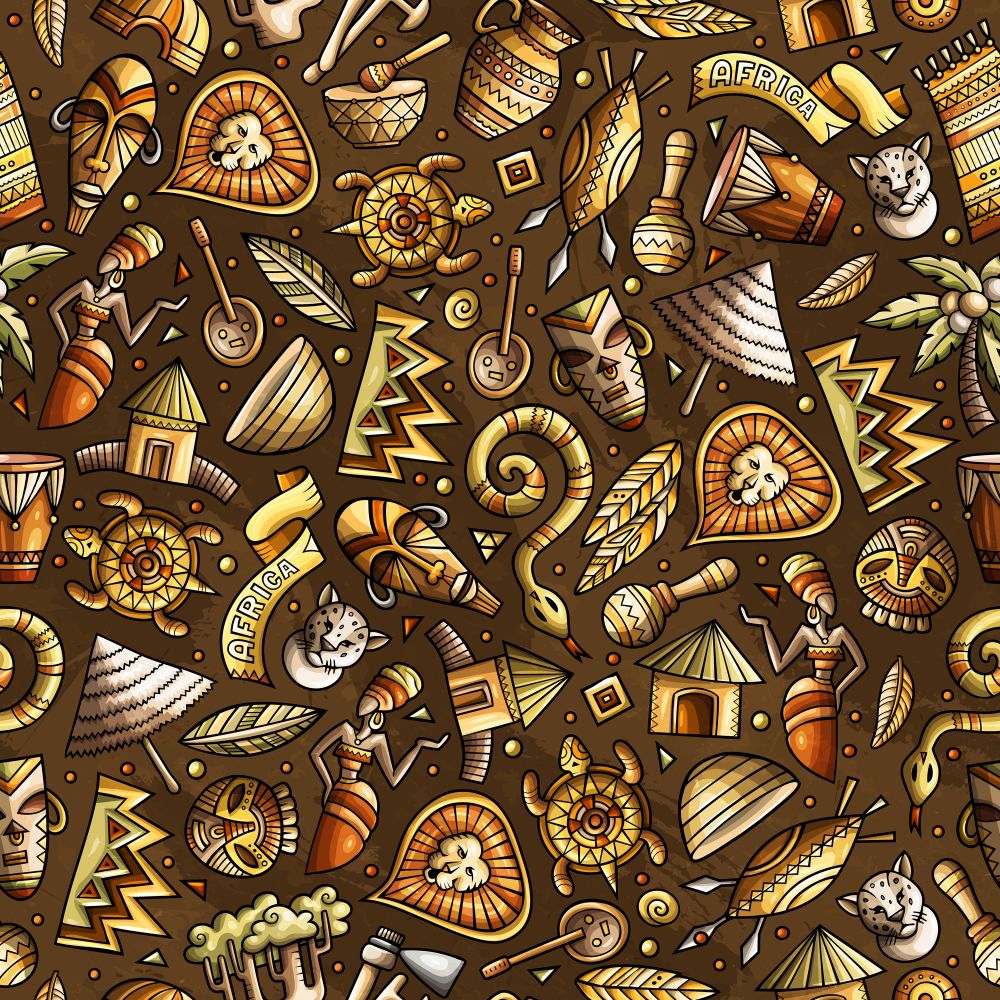 Chiefs decorated their court with their personal totems, or with those of the tribe making up the larger community. It was considered the duty of each community member to protect and defend the totem. This obligation could range from not harming that certain plant or animal to actively feeding, rescuing, or caring for it. African stories are told of how individuals became heroes for saving their totems from harm. This belief has continued to some degree in some African societies, these totems remain to be treasured and preserved for the good of the community. Totemism has led to environmental protection, the Batooro, Banyoro, and Baganda tribes in Uganda for example consider over 100 plant and animal species to be totems. Those who share the same totem are regarded as being related even though they may not be blood relatives. Totems allowed someone to establish some form of kinship with others in the region, establishing these relationships made it easier for travellers to find social support.

Animal spirits and totemism can also be found in pre-Christian Europe. The Norse believed in helpful animal spirits known as the fylgjur. These spirits would often appear in the form of cats, ravens, wolves, or frogs. These animals are also depicted as familiars or companions of witches in folklore. The wellbeing of the fylgja is intimately tied to that of its owner. If the human die, the fylgja dies too. These spirits are the totem of a single person rather than a whole group. Many of the gods and goddesses from Norse mythology are associated with particular animals. Odin is associated with wolves, ravens, and horses. Thor with goats, and Freya with wild boars and cats. Their human devotees would often choose their own animal totem based with its association with a certain god. 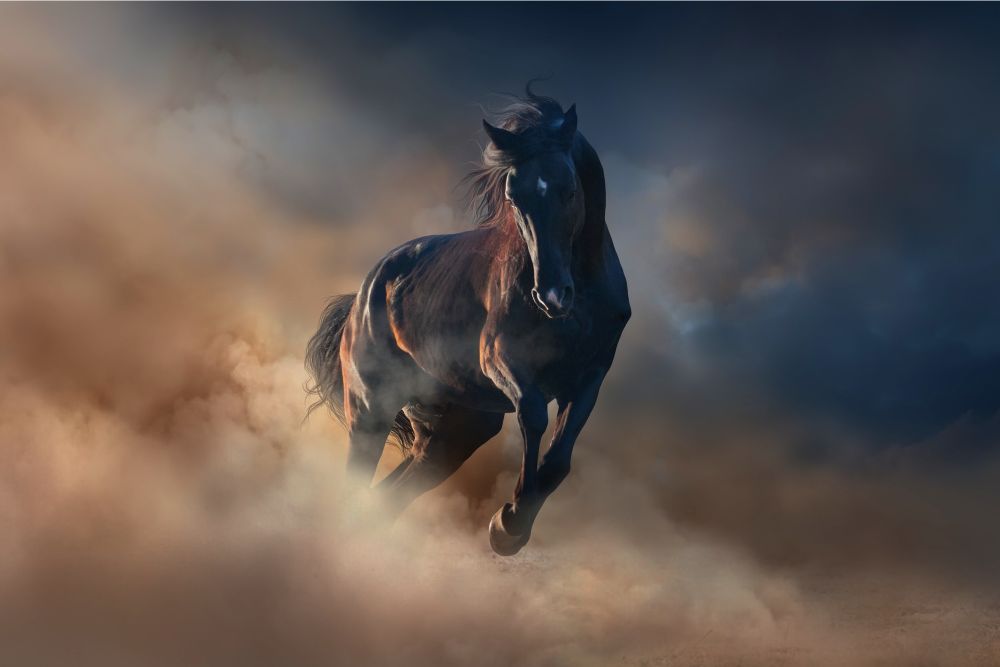 The ancient Germanic people used totemism within the institutional framework of their society. Many of these Germanic tribes had a totem animal, usually something regarded as fierce such as wolf or bear. It was believed that this animal would lend his aggression and strength to the warriors. Warriors were often initiated into these societies after spending a period of time alone in the wilderness. Their food was obtained by hunting, gathering, and stealing from other nearby communities. Through this dislocation it was believed that the warrior achieved a state of spiritual unification with the bear or wolf. After completing their initiation, the warrior would dress themselves in ritual costumes made from the hide, bones, or feathers of their totem animal. 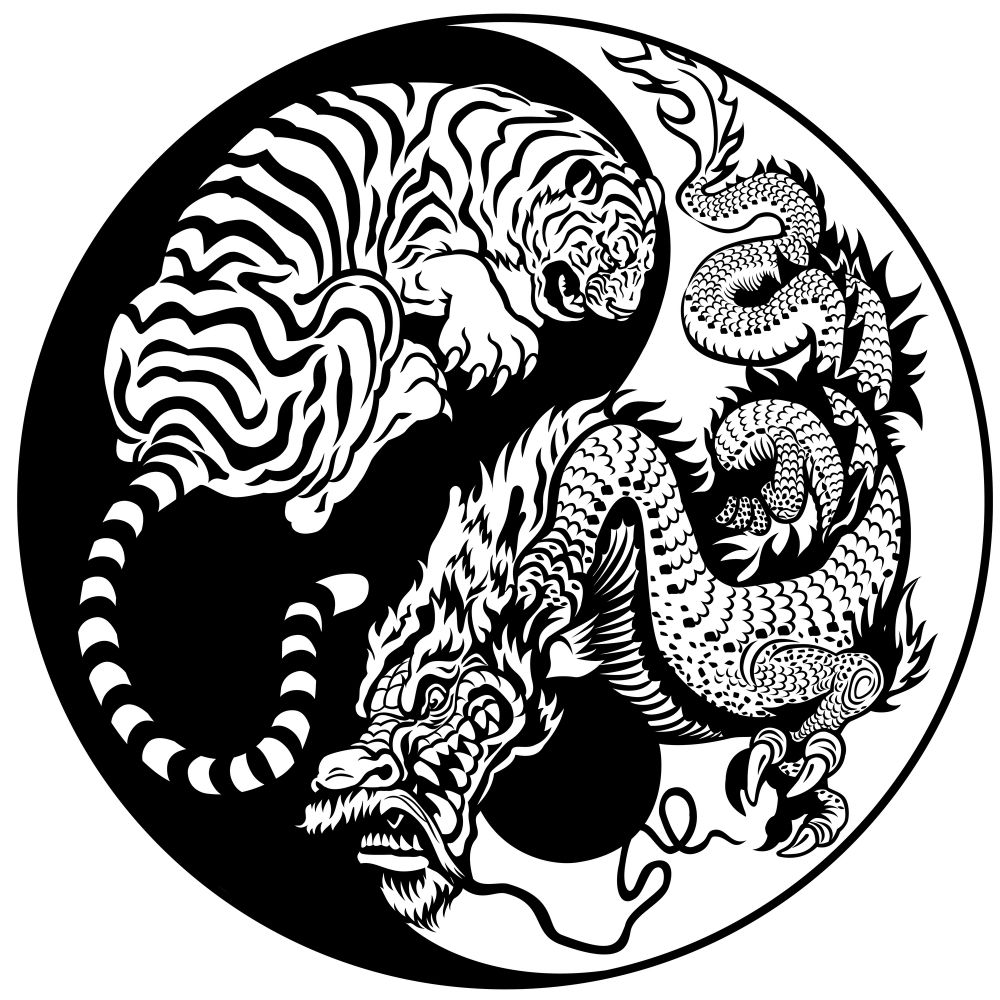 In the ancient Chinese shamanic tradition, the bird is the symbol for the spirit of the body. Dragon and tiger totems were also common in ancient China. The dragon tribe was in Eastern China and the tiger tribe were in Western China. Approximately 5,000 – 6,000 years ago. These two tribes took over the surrounding tribes. Eventually Huandgdi (the Yellow Emperor) led his dragon tribe into war against Yandi (the Fire Emperor) tiger tribe in Central China. After a long battle the tribes became united. The Chinese regarded these two emperors as their ancestors. In Chinese shamanic tradition the dragon represents East, the Liver and rising Yang energy. The tiger represents West, the lung and descending Yin energy. The union of Yin and Yang energies is often referred to as “the union of the dragon and tiger”

The Nor-Papua people who live in the northern region of New Guinea totems have an unprecedented cultural presence and patrilineal groups are commonly associated with various species of fish. These totem fish are believed to carry the souls of the dead. Children born into these communities are given the choice of whether they will accept the totem of their mother or father.

The Iban tribes of Malaysia practice a form of individual totemism based on their dreams. They believe if a spirit of a dead ancestor in human form enters the dream of an individual that they can offer protection in the name of an animal. The dreamer must seek the named animal as their personal totem. The attainment of these totem animals is so important that people may go to such measures as sleeping on graves to make contact with a spirit. The spirit animal must be sought out in its natural environment. The dreamer will study the animal and understand its behaviours. Often the individual will carry part of their totem animal with them and will present sacrificial offerings.