The Story of Apollo’s Lust for Daphne 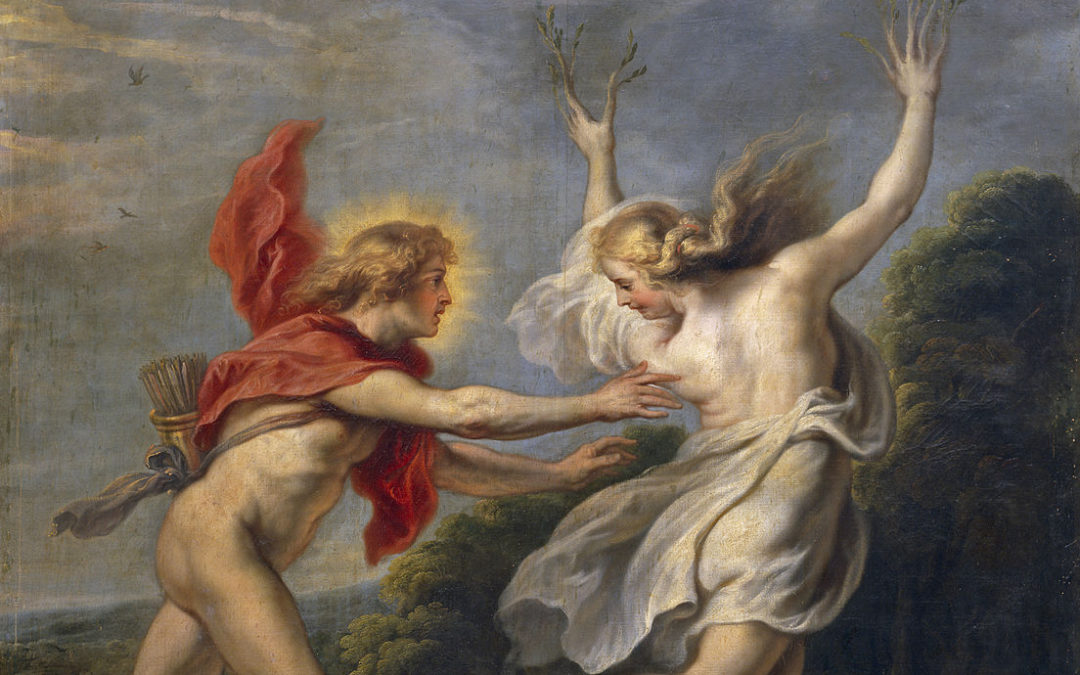 After the sun-god Apollo slew the formidable dragon Python at Delphi, he went north to the great river Peneios. Here he met the young god of love Eros, who was the son of Aphrodite. As Eros was minding his own business, playing and practicing with his bow and arrows, Apollo saw him where he then decided to mock him and his toy arrows. Apollo felt strong and proud after slaying the dangerous dragon Python so he boasted about it. But this disrespect agitated Eros, which in turn made him assure Apollo that he would show him the power and might of his arrows. As it was Eros had two different kinds of arrows, some made from gold and others made from lead, and he decided to shoot Apollo with one of his golden arrows, right to his heart. After which he swiftly disappeared.

Eros had flown to one of the peaks of Parnassus, where he saw the nymph Daphne, who was the fair daughter of the river god Peneus. Now he picked one of his lead arrows and shot one at her. Both of these arrows, the golden and the lead, were magical arrows and whoever was hit with the golden arrow would be overwhelmed with love towards the first person they saw, while whomever hit with the lead arrow would feel disgusted and aversion towards the first one they saw.

Shortly after Apollo caught a glimpse of Daphne and he was completely mesmerized by her beauty. He found her shining eyes, limbs, hands, hair, lips and just about everything about her irresistible. It is safe to say that Apollo immediately felt an excessive and outrageous love for her. As he approached her, he told her that he loved her immensely and wished to have her as his bride as they ascend to Olympus. But Daphne refused, instead, she fled hastily in great anxiety and fear as quickly as she could. But Apollo wouldn’t give up so easy so he followed her (stalker alert), and the hunt became more intense by the minute. Though Daphne had swift feet, Apollo being a mighty god was faster than her and gave her no time to rest. He was so close now that she could feel his breath on her neck. A couple more steps and she saw the river Peneios, the abode of her father, and desperately called for him:

Help, father, help! If mystic power dwells in your waters, change me and destroy my baleful beauty that has pleased too well.

Her father listened to her prayer and even before she finished it she started feeling her body changing, as her bosom turned into thin smooth bark, her slender arms to long branches and her hair to leaves. Moreover her feet, that just moments ago ran so swiftly, were now deep roots anchored to the ground, and lastly her beautiful face now transformed into a crown. Just as she was beautiful as a nymph so too was she beautiful as a tree, a laurel tree, and Apollo’s love for her remained the same. Since then the laurel tree has symbolized Apollo and it is the laurel wreath that he always wears on his head.

Daphne, seeing Apollon advancing upon her, took vigorously to flight; then, as he pursued her, she implored Zeus that she might be translated away from mortal sight, and she is supposed to have become the bay tree which is called daphne after her.
Parthenius, Love Romances 15 (trans. Gaselee)

All that remained of Daphne was her shining loveliness. And still Phoebus loved her; on the trunk he placed his hand and felt beneath the bark her heart still beating, held in his embrace her branches, pressed his kisses on the wood; yet from his kisses the wood recoiled. ‘My bride,’ he said, ‘since you can never be, at least, sweet laurel, you shall be my tree. My lure, my locks, my quiver you shall wreathe.’ . . . Thus spoke the god; the laurel in assent inclined her new-made branches and bent down, or seemed to bend, her head, her leafy crown.
Ovid in the Metamorphoses

Phoebus saw her, loved her, wanted her for his bride, and, wanting, hoped–deceived by his own oracles; and, as the stubble flames in the harvest fields or as a hedge catches alight when some late wayfarer chances his torch too close or, in the dawn, discards its smouldering embers, so love’s fire consumed the god, his whole heart was aflame, and high the hopes that stoked his fruitless passion. He sees the loose disorder of her hair and thinks what if it were neat and elegant! He sees her eyes shining like stars, her lips–but looking’s not enough!–her fingers, hands, her wrists, her half-bare arms–how exquisite! And sure her hidden charms are best! But she flies swifter than the lightfoot wind nor stops to hear him calling: ‘Stay, sweet Nympha Peneis (Peneid Nymph)! Oh, stay! I am no foe to fear. Lambs flee from wolves and hinds from lions, and the fluttering doves from eagles; every creature flees its foes. But love spurs my pursuit. Oh, you will fall and briars graze your legs–for shame!–and I, alas, the cause of your distress! The ground you race across is rough. You run too fast! Check your swift flight, and I’ll not chase so fast. Yet ask who loves you. No rough forester am I, no unkempt shepherd guarding his flocks an herds. You do not know–you fly, you madcap girl, because you do not know. I am the lord of Delphi; Tenedos and Patara and Claros are my realms. I am the son of Juppiter [Zeus]. By me things future, past and present are revealed; I shape the harmony of songs and strings. Sure are my arrows, but one surer still has struck me to the heart, my carefree heart. The art of medicine I gave the world and all men call me “Healer”; I possess the power of every herb. Alas! That love no herb can cure, that skills which help afford to all mankind fail now to help their lord!’
More he had tried to say, but she in fear fled on and left him and his words unfinished. Enchanting still she looked–her slender limbs bare in the breeze, her fluttering dress blown back, her hair behind her streaming as she ran; and flight enhanced her grace.
Ovid in the Metamorphoses

What do you think? Feel free to share your own insights below!