The Myth of Artemis and Actaeon 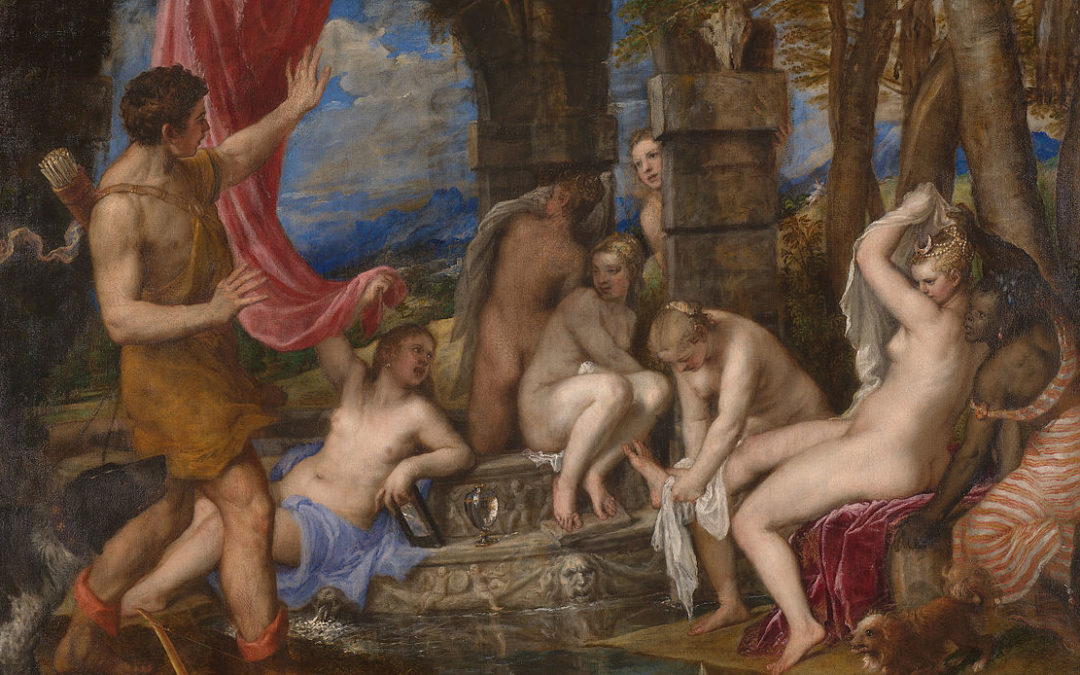 The goddess Artemis (Diana) was a great huntress who often takes her bow and quiver to wander off into the deep woods to hunt wild animals. She is often accompanied by the nymphs, and when the hunt ends, she and her nymph companions always seek out a rippling spring to quench their thirsts and bathe their beautiful maiden limbs in the glittering waters.

It now happened that a day like this when Artemis was out with her friends, a mortal man by the name of Actaeon, himself a skilled hunter and warrior, was out hunting accompanied with his pack of dogs in the foresty mountains of Cithaeron. Tired and thirsty after a long hunt he searched for a spring to drink from, and after wandering a while he began hearing the sounds of flowing water. Relieved, he started to advance in the direction of where the sound was coming from and arrived just close enough to suddenly bear witness to a most gorgeous sight. The goddess of the hunt, Artemis herself was just moments away of taking a bath in the glittering spring. The nymphs were helping Artemis to unburden her from all the hunting equipment, then they continued to unclothe her mantle and finally to untie her shoes as she at last proceeded to descend into the deep clear waters. All the while Actaeon stood there, spying while being awestruck by this divine sight.

Suddenly there arose an echo of the nymphs’ cries as they catch sight of Actaeon, the nymphs hastily proceed to attempt to cover the body of Artemis with their own limbs and bodies, but being a mighty goddess the figure of Artemis is too large for them to cover completely as her head towers over them all. Artemis is consumed by timidity and anger simultaneously as she realizes that she’s been seen by a mortal man. She knows precisely what to do as she would never accept any man boasting about seeing her naked. She subsequently grabbed some water from the spring with a cupped hand and threw it over Actaeon’s head, and something magical started to occur as the water made impact on the head of Actaeon. He turned into a stag, first his head as the horns grew out almost instantaneously, then his neck and throat started stretching longer, his hands and arms became feet and legs and the entire skin of his body was transformed into a thick spotted hide. Now fully transformed as a stag, he timidly and skittishly fled from the foresty scene in blazing speed, and he shortly comes across another lake and sees his own face reflected in the water. This mortifies him deeply as he attempted to let out some meaningful sounds in order to express his intense distress, but nothing comes out from his mouth as it should, what comes out is a moaning noise.

After a while Actaeon hears a dull sound from a distance which again fills him with horror. Its the sound of his own dogs, who’re barking from a distance. He knows their barks and voices well and flees yet again in horror to escape his own dogs ravenous desire to hunt and kill. However they start catching up to him and eventually target him out. The whole space around Actaeon fleeing is deafened by the sounds of the dogs barking, and in the very next moment one of the dog bites him on his back, and then another one on his shoulder. One dog after another come and sink their sharp teeth into his flesh. As Actaeon falls down to his knees he turns his pleading eyes to the pack of ravenous dogs that he himself trained to kill. This is the last thing he sees as he bleeds to death due to his wounds. Only now is the anger of Artemis settled. 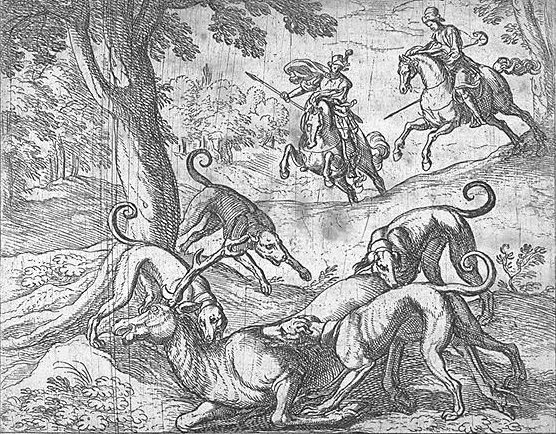 Remember the dismal fate of Actaeon—
torn to pieces in some mountain forest
by blood-thirsty dogs he’d raised himself.
He’d boasted he was better in the hunt
than Artemis. Don’t suffer the same fate.
Euripides in Bacchae (line 430) [1]

However, though her band of nymphs gathered in confusion around her, she stood turning to one side, and looking back, and wishing she had her arrows to hand. She caught up a handful of the water that she did have, and threw it in the man’s face. And as she sprinkled his hair with the vengeful drops she added these words, harbingers of his coming ruin, ‘Now you may tell, if you can tell that is, of having seen me naked!’ Without more threats, she gave the horns of a mature stag to the head she had sprinkled, lengthening his neck, making his ear-tips pointed, changing feet for hands, long legs for arms, and covering his body with a dappled hide. And then she added fear. Autonoë’s brave son flies off, marvelling at such swift speed, within himself. But when he sees his head and horns reflected for certain in the water, he tries to say ‘Oh, look at me! but no voice follows. He groans: that is his voice, and tears run down his altered face. Only his mind remains unchanged. What can he do? Shall he return to his home and the royal palace, or lie hidden in the woods? Shame prevents the one, and fear the other.
Ovid in the Metamorphoses Bk III:165-205 [2]