A Brief History of Human’s Interaction with Psychedelics 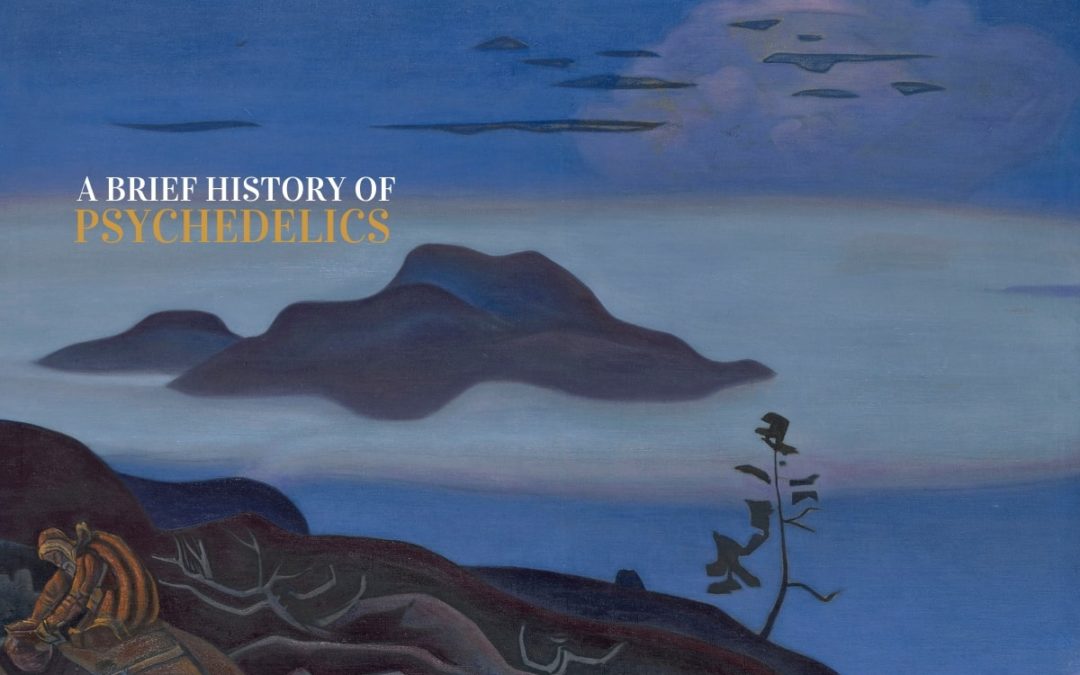 The modern history of psychedelics starts with one of the most astounding errors in science, when a Swiss chemist working to develop a stimulant for a well-known pharmaceutical company, discovered LSD instead. The revelation that he had after absorbing the substance by mistake through his fingertips, while riding his bike home, is now the most famous LSD trip and the marks the beginning of the scientific exploration of psychedelics. Albert Hofmann, the discoverer of acid, Timothy Leary, along with many others in the sixties-seventies, furthered the medical research of the neurobiological effects of psychedelics on the human body.

But most of all, what they’ve focused on and nurtured was the encounter with one’s own consciousness, and the exploration of its furthest realm. This expanding of our perception beyond our sensory limitations, which, paradoxically, leads to an ultra-sensitive absorption of all stimuli, and thus opens the door towards the understanding of multiple dimensions of reality. Yet, in less words, this is the scientific translation of a spiritual experience. And it is specifically this direction of research that is now impeded by current legislation and an overall political misinterpretation of the psychedelic effect as potentially harmful and prone for abuse. This point of view contradicts the very essence of the psychedelic experience which is therapeutic in nature, cleansing the body and mind, rebalancing the vital flow, aiding the cut-off of unhealthy behavioural patterns, including addiction. It also contradicts our ancient inheritance, for although we tend to see the psychedelic culture as only half a century old, it is nonetheless a track that’s been walked on and beat out millennia ago, by our ancestors in their ritualistic trips.

The spiritual use of psychedelic plants can be traced about five millennia ago, although Terence McKenna speculates extensively on the idea of an active role of these plants in a crucial point in the history of the human being, aiding the passage in another evolutionary stage. This theory would send the date of the first use of a psychedelic substance even further back in time. However, it’s our very scientific instruments that established our first intersection with these magical plants as far back as 3780-3660 BCE, through the carbon dating of the peyote cactus buttons containing Mescaline, found in Native Americans collections of ceremonial objects. It must also be acknowledged that these buttons are to this day used traditionally in rituals that are probably very similar to the one performed in the past. The perpetuation of the ancient knowledge and culture, through many other plants, in many different corners of the world, is an incontestable proof of their grace, or in current terms, of their beneficial effects.

The cult of the magic mushroom, renewed by Mckenna’s almost obsessionary research and conceptualization, is also ancient old, as revealed by the vast assortment of sculptures and objects representing what our ancestors considered to be a deity. Most famous such relics are to be found in Mexico, where the ritualistic consumption of psilocybin mushrooms, teonanacatl, meaning the flesh of gods, was a cultural standpoint. Going further south, in the South American continent, we encounter the Amazonian tribes who have been working for millennia with the amazing brew of Ayahuasca. This substance that is now making waves around the world, has been miraculously discovered by mixing two different plant ingredients growing naturally at an impressive distance from each other. It’s still a mystery how someone had thought how to combine the psychoactive DMT with the agent that would inhibit the action of our own body inhibitors such as to obtain the prolonged trance effect of Ayahuasca.

Come to think about it, the world of psychedelics is full of mysteries that promise to reveal not only new knowledge about reality but also about ourselves and our cultural heritage. The Hindu sacred texts, the Vedas, talk about an unknown substance, called soma, and employed as divine drink in spiritual ceremonies, thus placing it around 1700 BCE. Nevertheless the story goes that soma was used long before the texts were written. It’s been hypothesized extensively what actually is soma, Mckenna of course thought it to be psilocybe mushrooms, others identified it with the mind-boggling Christmas mushroom Amanita Muscaria, and the legend still goes on. The Greek, as well, according to their myths, have been incorporating psychedelic plants in the brews they used in the ancient ceremonial rituals, the mysteries at Eleusis to name one, plants that are also still to be uncovered.

Going back to recent years and the modern revival of this old culture, we must point out the immense advance that shifted a cultural and spiritual trend into a veritable scientific domain, the science of consciousness. And for this, we are grateful to many courageous explorers, and, maybe most of all, to Alexander Shulgin who expanded the repository of psychedelic substances with hundreds of new chemical compounds that he experimented with on himself and documented the whole process, for our bewilderment and education.

We are living a most exquisite period in the history of psychedelics, as we now have the opportunity to integrate the spiritual knowledge of the past, understanding it through rational scientific means.

We have the opportunity of a veritable common leap of consciousness