The Story of Demeter and Persephone 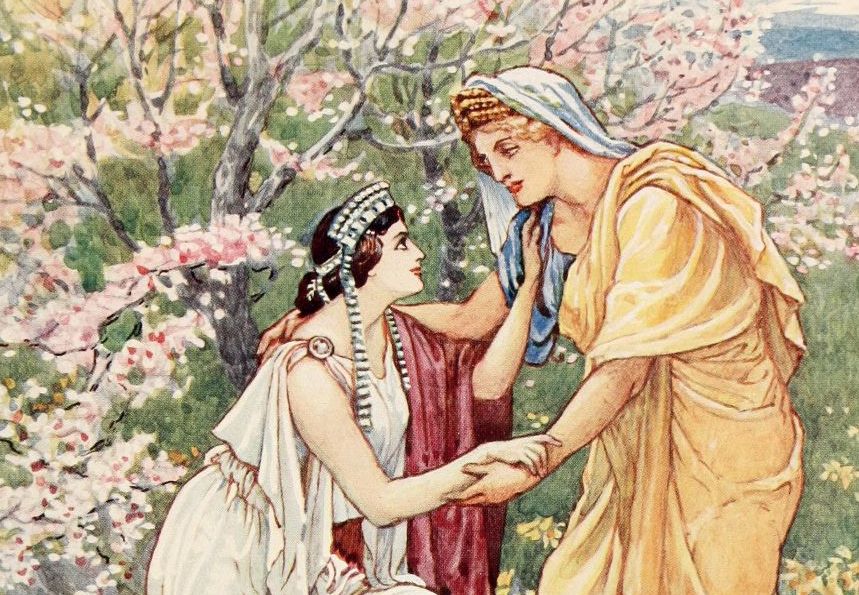 Demeter, the sister of Zeus, had a beautiful daughter by the name of Persephone, whom she loved above everything else. According to legend, their home was in the vicinity of Etna in Sicily.

One sunny day while Persephone was out with her friends gathering roses, lilies and hyacinths from a blossoming meadow, she suddenly, from a distance, saw the most beautiful flower she’d ever seen. She ran over there to collect it and was thus separated from her companions. Just as she would pick the flower, she heard a loud noise, like that of thunder. The ground split open right before her and from the depths a black chariot pulled by four black horses emerged. In the chariot sat a dark figure, a king of some sort because he wore a crown on his head. His face was shadowy and his gaze gloomy and grave.

Persephone was struck with fear and attempted to run away. But before she managed to escape, the shadowy king hastily approached her with his black chariot and violently grabbed her and placed her by his side. Her cries were so loud that they immediately caught the attention of her companions. She prayed, screamed and cried but to no avail, the shadowy king lashed his horses and they rapidly burst back to the depths whence they came and the earth closed above their heads. The friends of Persephone called and searched for her but she was gone. Demeter was devastated and full of despair. She went everywhere and searched the whole of Sicily but there were no traces of her daughter to be found.

With no more options left, she beseeched the moon goddess Hecate and asked her if she knew where Persephone was. Hecate referred Demeter to the sun god Apollo, who was all-seeing. From Apollo she learnt that it was Hades, the king of the underworld, that had abducted her daughter and that she now lived beside him in the underworld in the dark and deep night.

Demeter’s anger over Hades insidious bridenapping knew no boundaries. She retreated from her duties of caring for the fields and gardens. The grass on the fields withered away and the trees in the gardens dried up and from this emerged distress and poverty in all the countries of the world.

This troubled Zeus, the king of the gods, whom from his all-seeing throne on Mount Olympus decided to send down his messenger Iris to Demeter in order to conciliate and comfort her in her sorrows. But it didn’t work, Demeter wanted nothing but to have her daughter back. Zeus thus sent his other son Hermes to the underworld to meet Hades and order him to send Persephone back to her mother. Hades being subordinate to Zeus did as he was told. However before he handed Persephone over to Hermes, he managed to convince Persephone to eat a pomegranate which grew from the soil of the underworld. After she ate of this fruit, she was granted passage back to the world above, Earth.

Demeter was overjoyed when she saw her daughter and embraced her like never before. But this joy quickly turned into anxiety as she asked her daughter whether she had eaten anything in the underworld. Persephone confessed to her mother that she had eaten a pomegranate and Demeter was stricken with terror once again. She knew that whomever ate from the underworld had closed her own path back to this world.

After those turn of events, the gods of Olympus decided to make a deal with Hades and the gods of the underworld, a deal which meant that Persephone would be allowed to spend a certain part of the year with her mother on Earth, and the other part to live with her consort Hades in the depths of the underworld. When Persephone has to leave her mother to go back to the underworld, Demeter is deeply saddened and withdraws into solitude and isolation. When this happens, all the lands become dark and cold and the vegetation stops growing, but when Persephone returns to her mother, the sun shines its nourishing light once again over the lands of the earth and spring and summer prevail.