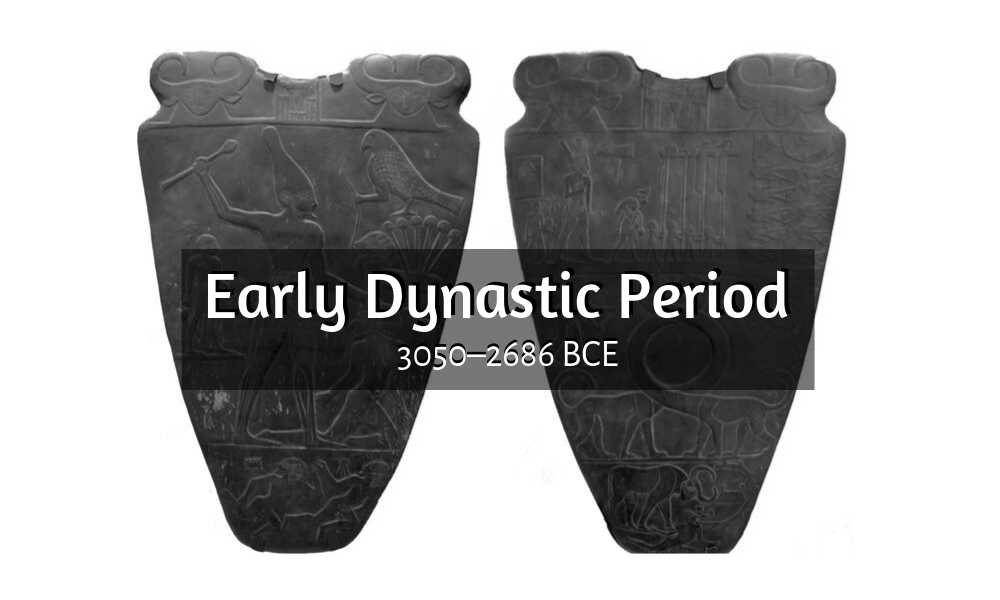 Early Dynastic Period is the formative period of the early Egyptian civilization. The first two dynasties 1-2, starting from about 3050 BCE.

Egypt is united into a single kingdom under King Narmer, Menes or Hor Aha depending on which sources you decide to go by. While some identify Menes and Narmer as one and the same individual, others view Menes and Hor Aha (traditionally regarded as the successor of Narmer) as being identical.

In the early dynastic period, the capital is established at Memphis.

It is in the necropolis’ in Abydos that the tombs of the early kings of the 0-1st dynasty are mostly found.

A common theme in early dynastic art (dynasties 0-3) is the smiting or defeating of enemies by kings. Like for example, the Narmer Palette where he subdues his northern enemies, or King Zanakht smiting an enemy found in fragment of a relief from the 3rd dynasty, or Gebel Sheikh Suleiman petroglyph which is usually interpreted as a Djer’s victory over the Nubians, or ivory and wooden palettes of king Den smiting his enemy. This recurring motif is later found in the Middle Kingdom as well.

The first dynasty supposedly lasted for 200 years with seven different rulers. It most likely begins with Narmer or Menes as is stated by Manetho and Herodotus.

According to Manetho, the second dynasty had 9 kings and lasted for 302 years, though modern egyptologists put the number a little above 200 years. That being said, rather little is actually known about the 2nd dynasty in comparison to the later dynasties in the Old Kingdom.

A mastaba, which means bench in Arabic, is referred to a certain type of rectangular tomb which came to be built often in the early dynastic and the Old Kingdom, initially for royalty and then for the elite class, that is when pyramids became the standard for kings.

In Saqqara, Lower Egypt are found many early dynastic mastaba tombs. This necropolis came to be used for 3000 years onwards and much of it is still intact to our own day and age.

In the tomb of Djer, the second king of the 1st dynasty, about 300 servants of his was found buried along with him in his tomb in Abydos. Some scholars believe that they were most likely sacrificed, this “custom” was abolished if there was indeed was one to begin with.

From Palestine there was an importation of copper, wood and wine. From Afghanistan, the semi-precious stone, Lapis Lazuli was imported and turned into jewelry. From the mythical land of Punt somewhere alongside the Red Sea, other exotic goods were imported, such as incense, ivory, ebony and leopardskin.

The two first dynasties of the early dynastic period are also known as the archaic period or the Thinite period, because many of the rulers came from the city Thinis, most likely close to the ancient city of Abydos.