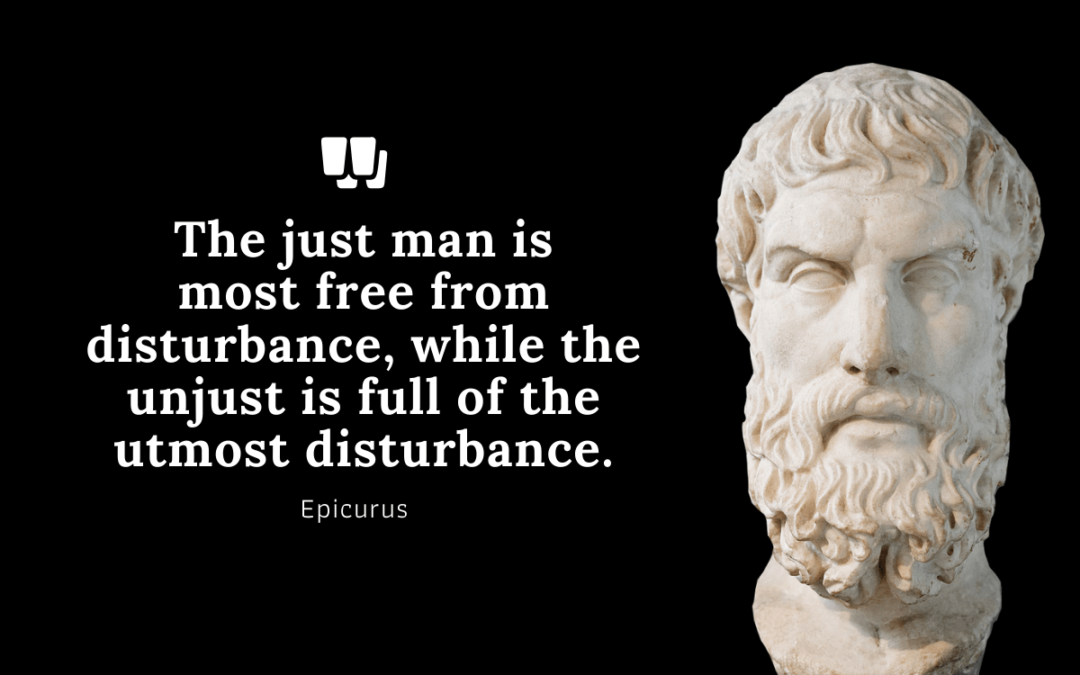 Epicurus (341-270 BCE) was an ancient Greek philosopher and sage who founded the influential Epicurean school of philosophy. A philosophy whose main goal was the attainment of happiness and tranquility of mind, mainly through the absence of pain and fear, through the cultivation of friendship, freedom and an examined life. It is likely that Epicurus received a platonic education when growing up and later studied under the rhetorician Nausiphanes, whom he didn’t like too much but who nevertheless introduced him to the Atomist philosophy of Democritus.

In 306-307 BCE, i.e. his early thirties, Epicurus created his own philosophical school in Athens. This school was called the “The Garden of Epicurus” and the Epicureans were referred to in ancient times as “those in the garden” (hoi apo tōn kepōn). The Epicureans were many and dedicated, as they supposedly made oaths of allegiance that went something like:

I shall be faithful Epicurus, whose doctrine I have chosen to follow freely.

The followers of Epicurus came to be known as Epicureans and the philosophy came to be known as Epicureanism. This was a kind of community where modesty, simplicity and virtue were the norms and ideals. Right before the entrance to the garden there supposedly was a watering can and a simple breadcake – which was to symbolize the fact that a person needs very little in this life.

The Basic Tenets of Epicureanism

The philosophy Epicurus can in many ways be seen as a materialistic philosophy as he did not recognize the gods of the masses, denied the existence of predestination or destiny, acknowledged man’s power to shape his own life.

The goal of Epicurean philosophy was to bring and induce a state of happiness (eudaimonia), pleasure (hēdonē), peace of mind and body (ataraxia), and absence of pain (aponia) in us humans. Ataraxia was seen as “the ultimate goal of wisdom.” One of the way ataraxia was achieved was through eliminating the fear of death and of the gods.

Epicurus taught, like the Cynics and Stoics, that to attain genuine satisfaction in life, one must limit one’s desires and needs, and this is the wisdom and path that leads towards a happier life. The more immoderate and greedy people are, the harder it is for them to attain joy. According to some historians, Epicurus remains one of the most misunderstood of the classical Greek philosophers, as he and his followers were condemned as self-gratifying, hedonistic and immoral people.

Epicurus is thought never to have married nor fathered any children. His last days were anything but pleasant from a physical perspective, as he suffered from kidney stones for years. He died in 270 BCE at the age of 72, most likely resulted from the stones and related gastric issues. Despite his prolonged physical pain, he supposedly remained cheerful to the end. After his death, Epicurean schools continued and flourished in the Hellenistic world as a main competitor of the Stoic schools.

In this article, I’ve decided to share some of the most insightful quotes by Epicurus: 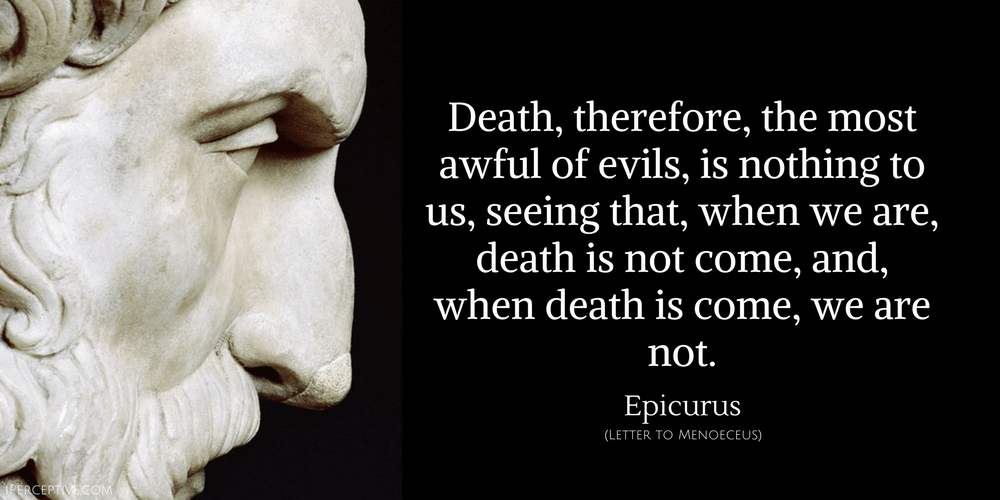 Death, therefore, the most awful of evils, is nothing to us, seeing that, when we are, death is not come, and, when death is come, we are not.
Epicurus (Letter to Menoeceus)

If thou wilt make a man happy, add not unto his riches but take away from his desires.
Epicurus (Quoted in A Cyclopedia of Education, 1911)

Nothing great is created suddenly, any more than a bunch of grapes or a fig. If you tell me that you desire a fig. I answer you that there must be time. Let it first blossom, then bear fruit, then ripen.
Epicurus

There is no such thing as justice in the abstract; it is merely a compact between men.
Epicurus (Quoted in Epicureanism, 1880)

You don’t develop courage by being happy in your relationships everyday. You develop it by surviving difficult times and challenging adversity.
Epicurus

It is not so much our friends’ help that helps us, as the confidence of their help.
Epicurus (Quoted in The Greek Atomists and Epicurus: A Study, 1964)

Misfortune seldom intrudes upon the wise man; his greatest and highest interests are directed by reason throughout the course of life.
Epicurus

Not what we have, but what we enjoy, constitutes our abundance.
Epicurus

Natural justice is a symbol or expression of usefulness, to prevent one person from harming or being harmed by another.
Epicurus (Principal Doctrines)

It is folly for a man to pray to the gods for that which he has the power to obtain by himself.
Epicurus

Death does not concern us, because as long as we exist, death is not here. And when it does come, we no longer exist.
Epicurus (Quoted in Roman Philosophy and the Good Life, 2009)

Do not spoil what you have by desiring what you have not; remember that what you now have was once among the things you only hoped for.
Epicurus

All sensations are true; pleasure is our natural goal.
Epicurus

It is better for you to be free of fear lying upon a pallet, than to have a golden couch and a rich table and be full of trouble.
Epicurus (Quoted in Great Traditions in Ethics, 2007)

The just man is most free from disturbance, while the unjust is full of the utmost disturbance.
Epicurus (Principal Doctrines)

The art of living well and the art of dying well are one.
Epicurus (Quoted in St. Paul and Epicurus, 1954)

Man loses all semblance of mortality by living in the midst of immortal blessings.
Epicurus (Letter to Menoeceus)

Of all the means which wisdom acquires to ensure happiness throughout the whole of life, by far the most important is friendship.
Variant: Of all the things which wisdom provides to make us entirely happy, much the greatest is the possession of friendship.
Epicurus (Principal Doctrines) 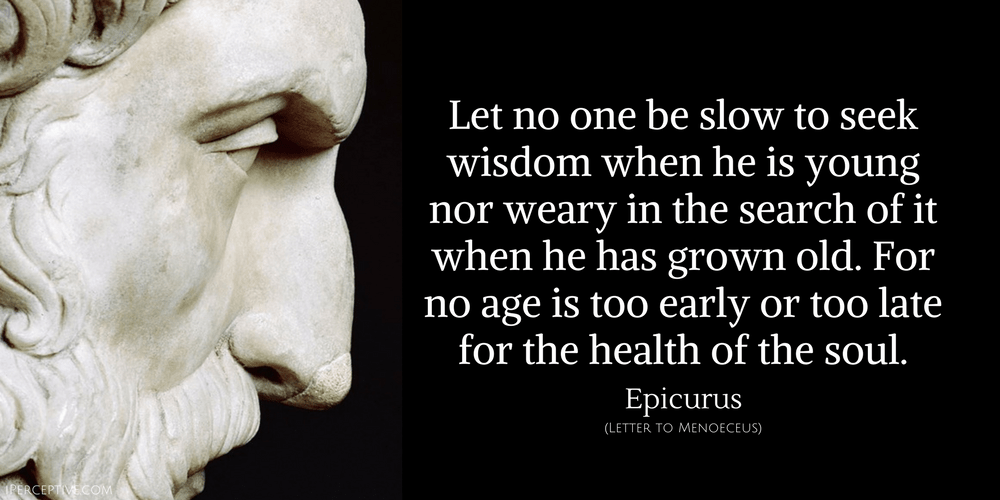 Let no one be slow to seek wisdom when he is young nor weary in the search of it when he has grown old. For no age is too early or too late for the health of the soul.
Epicurus (Letter to Menoeceus)

Skillful pilots gain their reputation from storms and tempest.
Epicurus

A free life cannot acquire many possessions, because this is not easy to do without servility to mobs or monarchs.
Epicurus (Quoted in The Philosophy of Epicurus, 1963)

Self-sufficiency is the greatest of all wealth.
Epicurus (Quoted in The Essential Epicurus, 1993)

The misfortune of the wise is better than the prosperity of the fool.
Epicurus

The greater the difficulty, the more the glory in surmounting it.
Epicurus (Quoted in Epicurus’s Morals, 1712)

If God listened to the prayers of men, all men would quickly have perished: for they are forever praying for evil against one another.
Epicurus

Riches do not exhilarate us so much with their possession as they torment us with their loss.
Epicurus 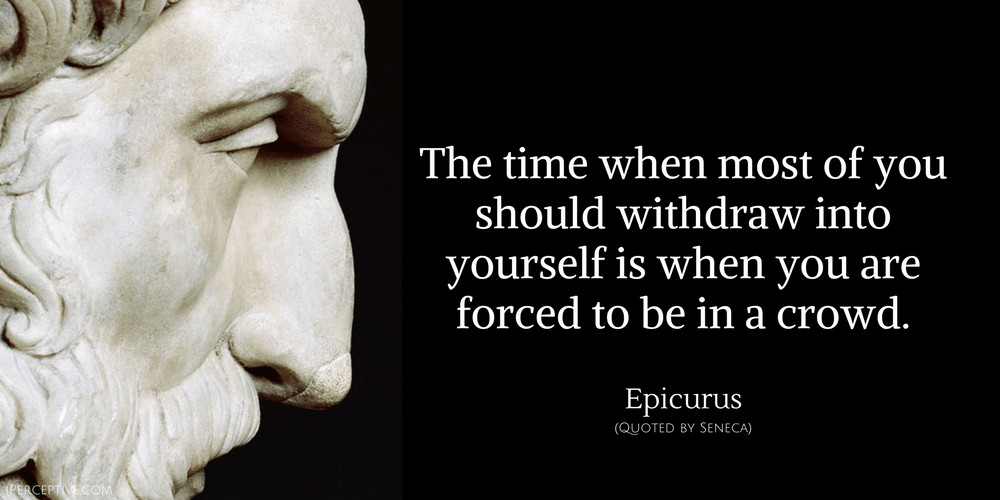 The time when most of you should withdraw into yourself is when you are forced to be in a crowd.
Epicurus (Quoted by Seneca)

Luxurious food and drinks, in no way protect you from harm. Wealth beyond what is natural, is no more use than an overflowing container. Real value is not generated by theaters, and baths, perfumes or ointments, but by philosophy.
Epicurus (Written on a esplanade wall in Oenoanda)

It is possible to provide security against other ills, but as far as death is concerned, we men live in a city without walls.
Epicurus (Quoted in Epicurus, 1967) 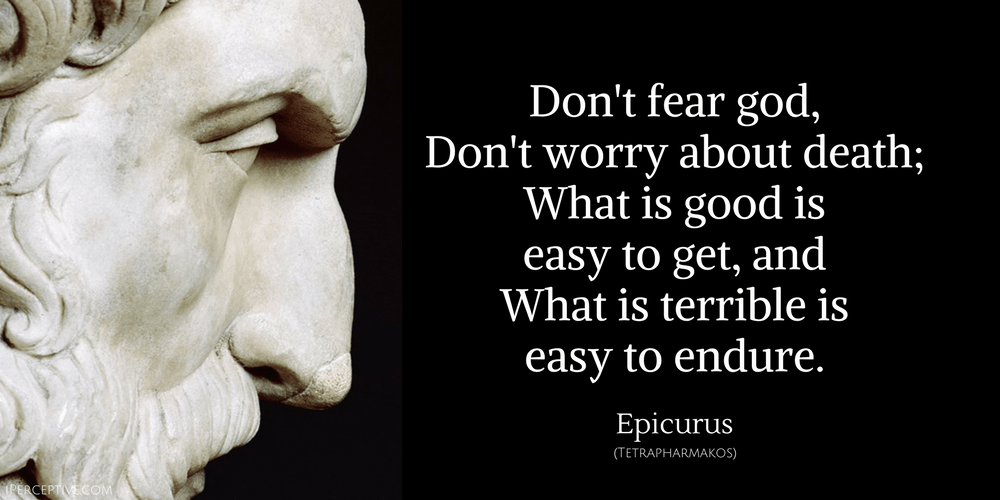 Don’t fear god,
Don’t worry about death;
What is good is easy to get, and
What is terrible is easy to endure.
Epicurus (Tetrapharmakos)