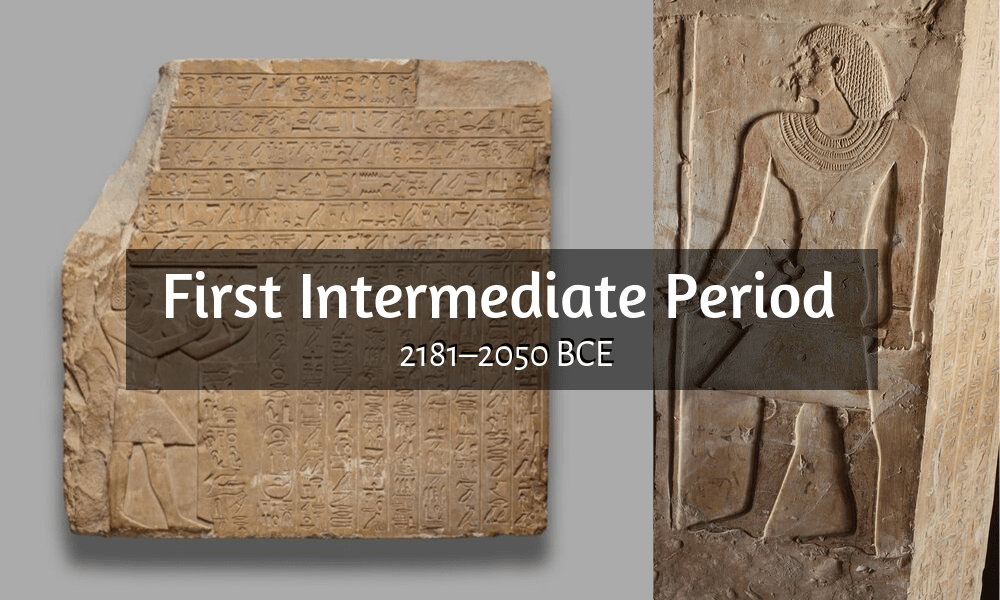 First Intermediate Period marks the period of perhaps the most severe political, economical and cultural “crisis” in ancient Egyptian history. In this period the 7-10th dynasty is included and also the first part of the 11th dynasty with the ancestral Mentuhotep I and the three Intefs. Generally speaking the dynasties of the first intermediate period weren’t dynasties that had complete control over the entire country. Warlords and self-proclaimed kings all were most likely involved in a game of thrones. Wars between neighbouring city states was a reality, the central government and order of the Old Kingdom was dissolved.

Egypt was divided into two main opposing bases of power, Upper and Lower Egypt, similar to the predynastic period.

One of the main defining features of the first intermediate period is the short-lived nature of the rulers in different parts of Egypt.

Many Nubian soldiers seem to have served under the Egyptians during the first intermediate period.

Shortly after the death of Pepi II, the centralized and orderly government of the Old Kingdom, collapsed. Maybe not immediately but surely.

The First Intermediate Period is characterized by short lived rulers, according to Manetho, 70 rulers for 70 days, which was most definitely an exaggeration to describe the instability of the times.

If the 7th dynasty of Egypt did exist, it would mark the beginning of the first intermediate period, however this dynasty has traditionally been considered as being non-existent or fictitious by most egyptologists. Manetho allegedly describes the 7th dynasty as being chaotic in his Aegyptica and since little is actually known about this dynasty, many notable egyptologists have proclaimed that it probably didn’t exist. However it should be noted that recently some scholars challenge that conclusion.

This was most likely a time when bandits and graverobbers roamed the country, stole and destroyed what was previously held to be holy and untouchable. The pyramids, tombs and temples of the pharaohs of the Old Kingdom wasn’t spared.