God is Within: A Timeless Spiritual Pointing 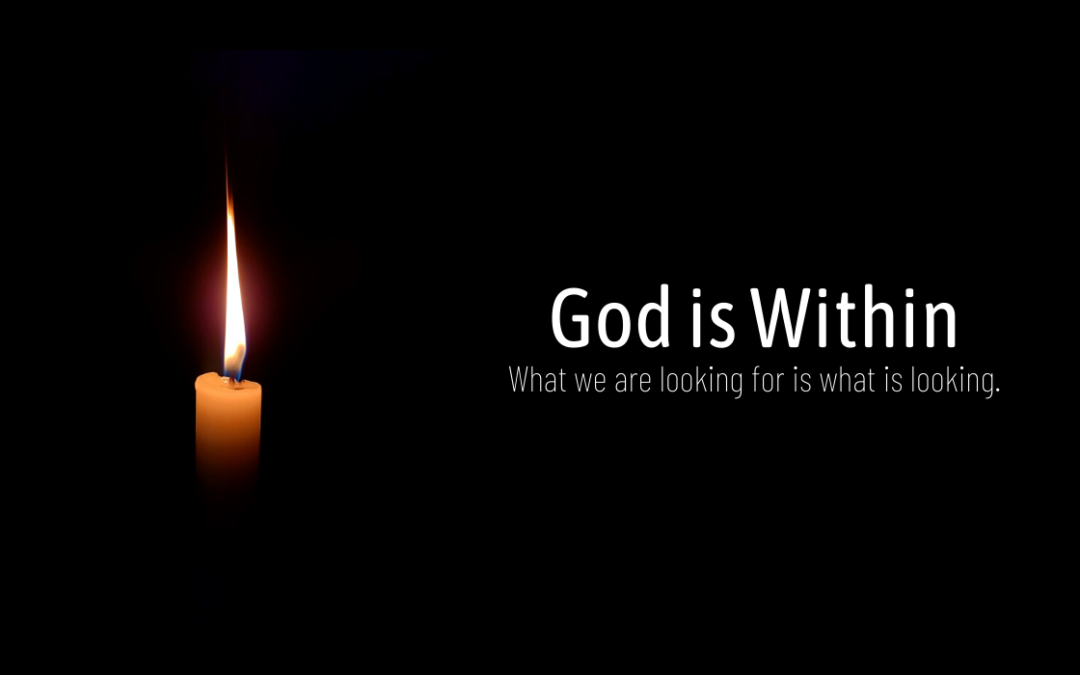 God is not distant and god is not separate from you. This is indeed what most religions in essence point to, however the trend of many religions for these past millennia’s has been quite the opposite. Which is that they have directly and indirectly created the sense of separation between the individual and the universal instead.

God need not be seen as an entity that is somewhere yonder far far away, but should be understood to be an essential substrate for which all experience refers to. This is something all the great masters and mystics of the world have emphasized, namely that you will not find the light of the supreme in objects and materialism but within yourself. The objective world is merely an embellishment to the light that shines from within, without the inner light nothing outer can appear.

This is a powerful message that focuses on your subjective and direct experience as a human being; in a sense your experience is profoundly empowered. Because it urges you to become insightful and open to the possibility that the divine is not distant nor different from your essential nature. Perhaps one need not even call it divine, one could simply call it ones own existence as it is.

The atheist as well as the religious person could participate in this experiential recognition of who or what it is that is within themselves. Perhaps in more secular terms, the statement that god is within should ideally give rise to the fascination of being an aware sentient being. When doing so, that is if one is sufficiently thirsty and earnest for true knowledge /gnosis/, one should trace back this subjective sense back to its source.

True knowledge is beyond the bodily, mental and emotional aspects of man. It is ones existential and intuitive knowing of oneself and reality.

God could in this sense be equated with and as existence. Existence is within you. Well this is maybe an obvious thing you might say. My reply would be, yes and no.

Well precisely because the entire societal structure and the dominating paradigm that permeates the majority of human societies is that the world is outside of us and we are mere action figures inside of it. From a spiritual lens this simply isn’t the case, the world is arising within. Again, the world is first and foremost derived and appears from that which is within.

Well if truth be told, existence when fully grasped with your nirvanic eye is neither within nor without. It is formless and all pervasive. It’s like a formless screen that permeates all existence, and trillions of subjective sentient beings are appearing in it.

God’s presence could be seen as the screen itself, one totality, indivisible and when a sentient being comes to this supreme understanding, he is sometimes viewed as an enlightened one, buddha or a mystic.

To say that God is within is truly one of the profoundest statements one can utter, as it automatically shifts our focus to our own subjective reality, and that is indeed where all the lasting spiritual truths are found.

Spiritual enlightenment isn’t something esoteric and complex, not at all! It’s rather something that is readily available when a being somewhere in the universe is mature enough to recognize it.

The teaching that God is within is one of these nirvanic insights and recognitions that has the power to bring you closer than ever to your own enlightened core.

Below are some handpicked quotations and excerpts from some prominent texts and some of the worlds insightful individuals and mystics, quotations that resonate this timeless spiritual truth.

The Kingdom of God is within you.
The Bible

The day of my spiritual awakening was the day I saw–and knew I saw–all things in God, and God in all things.
Mechtild of Magdeburg

O Seeker, where dost thou seek me Lo, I am beside there I am neither in temple nor in mosque, I am neither at Kaaba nor at Kailash. Neither am I in rites and ceremonies Nor Yoga nor in renunciation Lamp burns in every house, O blind me, And you cannot see them….. Your Lord is near, you are climbing. The palm tree to see him Yoga and the telling of beads … These are naught to me.
Kabir

Don’t seek God in temples. He is close to you. He is within you. Only you should surrender to Him and you will rise above happiness and unhappiness.
Leo Tolstoy

The life of the spirit is not our life, but the life of God within us.
Teresa of Avila

We men have one book in common which points to God. Each has it within himself, which is the priceless Name of God.
Jacob Böhme

Spiritual Pointing II: Everything is One »