The Story of Niobe’s Hubris and Leto’s Vengeance 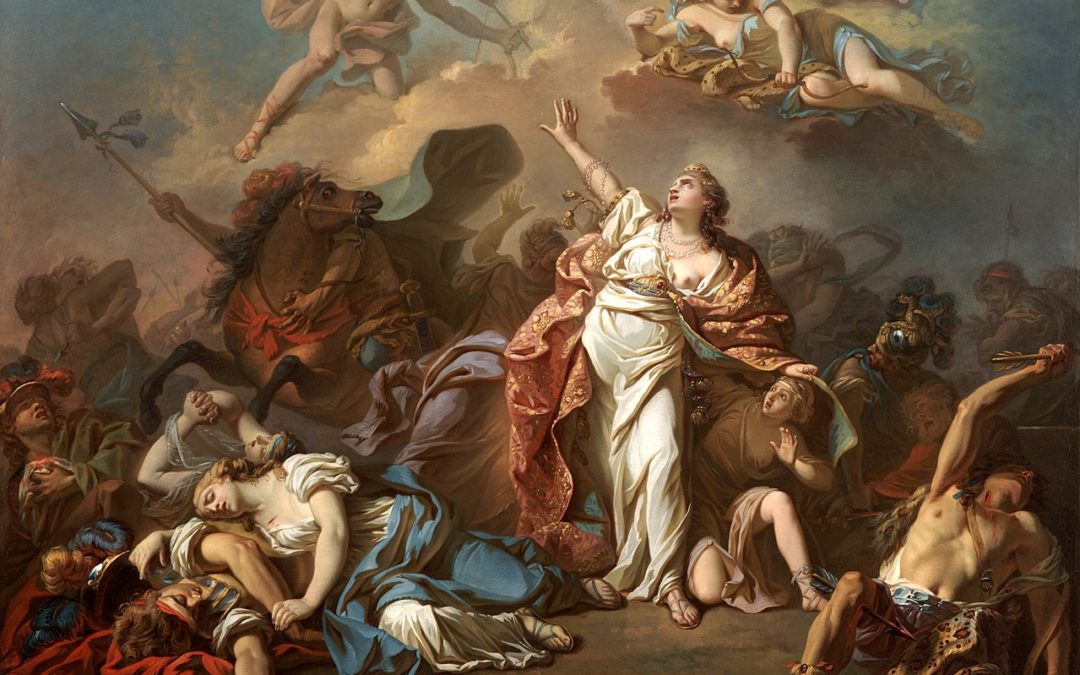 Years have past since Leto escaped the wrath of Hera and became the mother of Apollo and Artemis, the children of Zeus. Leto was now worshipped in the city of Thebes where all the women regularly brought sacrifices and prayers in her reverence on the oracle’s command. However in Thebes there lived the beautiful Niobe, wife of king Amphion, and Niobe herself was the grandchild of Zeus through his son Tantalus, the king of Lydia. With Amphion she had fourteen children, seven sons and seven daughters. Niobe was proud of belonging to the divine lineage, of her beauty and especially proud of her seven daughters and seven sons. In her blind pride and arrogance she was angered that all the women of Thebes worshipped Leto, who only mothered one son and one daughter, which she deemed to be petty in comparison to her own great fortune in her children.

Once when there was gathering at a temple, Niobe couldn’t hold the frustration anymore and said to the women: “Why do you go about worshipping and honouring this Leto figure, who isn’t worth this great reverence that you bestow upon her, and who can’t compete with me in anyway when it comes to plenteous offsprings”

The women were aghast by the insolent impiety and immediately expressed by Niobe and they started to pray to Leto asking her for mercy and pity towards their queen. But Leto was anything but merciful, instead she was provoked, and in a spirit of anger proceeded to call upon her children Apollo and Artemis whom she told of Niobe’s hubris and arrogance. After hearing this Apollo and Artemis descended down from the skies with their godly powers upon the main fortress of Thebes. They were determined to avenge this indignity directed towards their mother.

Just outside of the city walls, there rode and competed Niobe’s seven sons against each other on their strong horses. Then there arose a sudden and terrible cry from one of the sons. He shouted in pain and confusion as an arrow had penetrated his chest. He released the reins of the horse and fell dead to the ground. It was Apollo who pierced his chest with his arrow, and now one after another fell dead to the ground hit by the God till there was but one son left, and he in desperation raised his arms to the heavens and asked for mercy. But Apollo was relentless and determined to restore his mother’s honour, and in the very next moment he shot him down as well.

Their sisters who stood by the sidelines, with tears abundantly flowing from their eyes, witnessed this terrible massacre and stood there beside the corpses of their seven brothers. Only now it was their turn, as multiple arrows descended down from the bow of Artemis, killing one sister after another. Their distraught and horrified mother did her best to protect her daughters with her own body as a shield, but to no avail. As Niobe raised her hands to the skies and asked for mercy for her last and youngest daughter’s life to be spared, alas she too was executed. Niobe was left childless. Her husband Amphion overwhelmed with despair thrust his sword through his own chest. 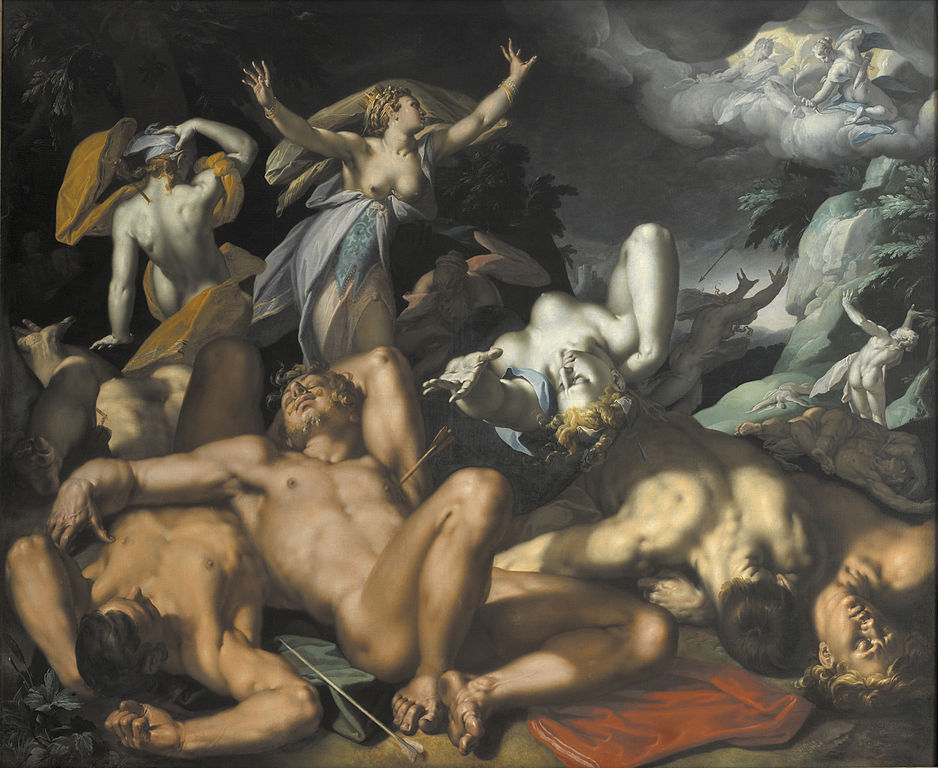 Completely frozen due to grief Niobe sat among her dead sons, daughters and beside her dead husband. Stale as a statue she move neither hand nor feet, and she simply couldn’t divert her gaze from her dead children. The light of her life was gone and her face was rendered lifeless. Her palate hardened and tongue stiffened and the blood in her veins stopped flowing. Her feet couldn’t walk and her arms couldn’t move. So she sits there petrified in unspeakable grief and sorrow. Days and nights pass and still there Niobe sits, immovable like a rock. Her body getting colder and colder, and the only thing she’s capable of is crying. Solid and stiff as a rock, a whirlwind appears hurls her away, far away to her native country in Asia Minor, and there she remains firmly rooted beside a mountain ridge, there she sits and sheds her tears. Till this day. From this cliff the tears of Niobe flow in streams.

Achilles then went back into the tent and took his place on the richly inlaid seat from which he had risen, by the wall that was at right angles to the one against which Priam was sitting. “Sir,” he said, “your son is now laid upon his bier and is ransomed according to desire; you shall look upon him when you him away at daybreak; for the present let us prepare our supper. Even lovely Niobe had to think about eating, though her twelve children- six daughters and six lusty sons- had been all slain in her house. Apollo killed the sons with arrows from his silver bow, to punish Niobe, and Diana slew the daughters, because Niobe had vaunted herself against Leto; she said Leto had borne two children only, whereas she had herself borne many- whereon the two killed the many. Nine days did they lie weltering, and there was none to bury them, for the son of Saturn turned the people into stone; but on the tenth day the gods in heaven themselves buried them, and Niobe then took food, being worn out with weeping. They say that somewhere among the rocks on the mountain pastures of Sipylus, where the nymphs live that haunt the river Achelous, there, they say, she lives in stone and still nurses the sorrows sent upon her by the hand of heaven. Therefore, noble sir, let us two now take food; you can weep for your dear son hereafter as you are bearing him back to Ilius- and many a tear will he cost you.”
Homer in the Iliad (book XIV)

What do you think? I’d love to hear your thoughts!