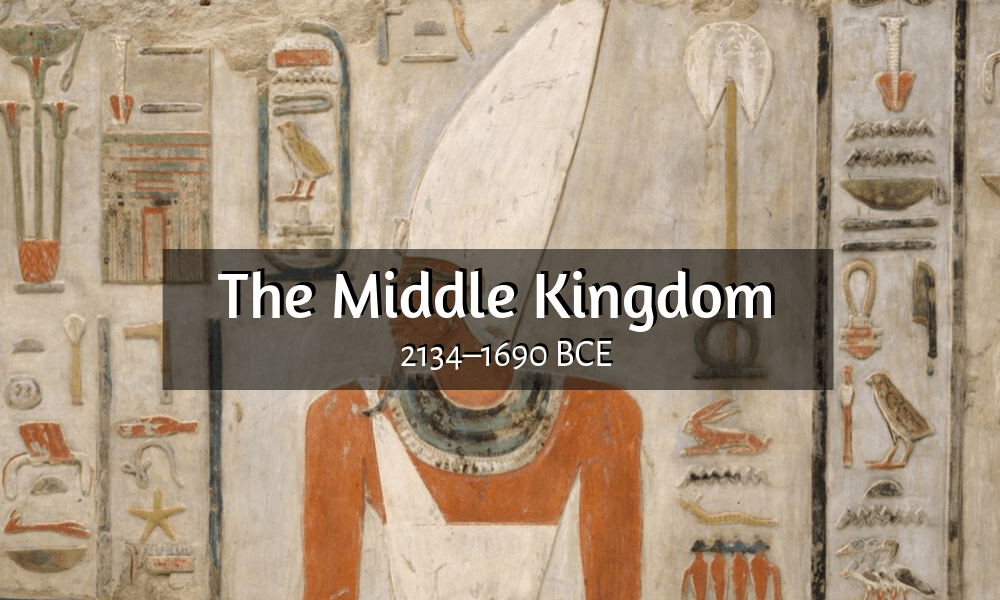 Middle Kingdom marks the reunion and resurrection of the once united and powerful Egypt of the Old Kingdom. The 11th dynasty begins with Mentuhotep II reuniting the fragmented parts of Egypt into one single country. The 11th dynasty began building big once again and large expeditions to more distant lands becomes once more a possibility. In the Middle Kingdom, Egypt was reborn.

In the 11th dynasty Thebes becomes the main residence of the pharaoh and the government.

Mentuhotep II depicts himself as a warrior king that unites Egypt and battles the enemies of Egypt from the north east (Asia) and from the west (Libyans) and the south (the Nubians). Egyptologists still are unsure whether all of these depictions of warfare were actual events that took place or if they were more for symbological use, i.e. display of power.

The royal court of Mentuhotep II was reorganized, where the vizier, the treasurer, the steward and the scribe were the most prominent parts. The head of the administration was the vizier, and second to him was the treasurer who was responsible for the goods coming to the palace, the steward came next and was responsible for all the estates and their agricultural produce, the scribe was the personal scribe of the king. The degree of importance of these people are mostly derived from their tombs and monuments.

Five princesses, poorly mummified, are found in the mortuary complex of Mentuhotep II at deir al-Bahri. The youngest was as young as 5 years old.

The American archaeologist Herbert Winlock finds a mass burial at Thebes of 60 young men, one theory is that they were the fallen soldiers of the king who fought his enemies at the north.

Fortifications and fortresses started being built in the north and south (Nubia) of the country during the Middle Kingdom, according to written sources. The Semna Boundary Stela of Senwosret III describe the efforts of Sesostris III and his grandfather Sesostris I to build the fortresses.

In the 12th dynasty, the city Ijitawy in the Fayoum area becomes the capital of the pharaoh and the government. 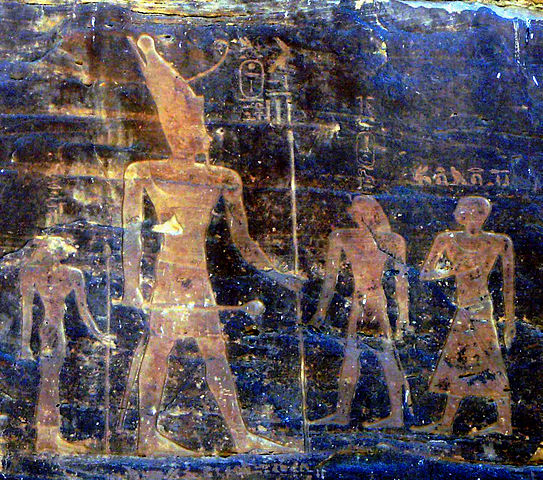 Silsileh rock relief depicting a giant of king Mentuhotep II, on the right Intef III and the treasurer Kheti and, on the left, queen Iah.

Egypt undergoes a process of reunion which is mainly driven by Nebhepetre Mentuhotep II. The south part of Egypt regains access and control over the north. Mentuhotep II thus becomes the first pharaoh of the Middle Kingdom.

The artists of the Middle Kingdom looked back to the fifth and sixth dynasty of the Old Kingdom for inspiration and influence. This was most likely an ideological and political move as the new rulers of the 11-12th dynasty wanted to separate themselves from the style that developed during a time of chaos and division which characterized the first intermediate period.

Nebtawyra Mentuhotep IV succeeded his father Sankhare Mentuhotep III and is known for sending 10 000 men to the Wadi Hammamat for stone. The path was about 40 kilometers in the desert. Two miracles supposedly took place during the vizier Amenemhat I expedition to Wadi Hammamat, two miracles that gave credibility to the future kingship of Amenemhat.

The first king of the 12th dynasty was most likely the vizier Amenemhat I, he was the vizier to Mentuhotep IV (Nebtawyra). It is not know how he claimed the throne but it could be that he was appointed by Mentuhotep or that he seized the throne.

In the 12th dynasty Amenemhat moves the capital to the city Ijitawy (binder of the two lands) in the Fayoum area, which is about 30 miles southwest of Cairo. It becomes the nexus that unifies the two parts of Egypt, both in practice and symbolically.

Amenemhet II of the 12th dynasty is known for his expansionism when it came to trade. Treasures, gifts and items from Levantine, Babylonian and Mesoptamian sources were found south of Luxor in the Temple of Tod.

The 11th dynasty consisted of the three Mentuhotep’s reigning in total for about 70 years. They were then succeeded by the Amenemhat which was most likely the vizier of the last king of the 11th dynasty Nebtawyra Mentuhotep IV. Amenemhat then began the 12h dynasty which continued for about 180 years (1939 – 1759 BCE).

* The reign of the Mentuhotep’s are according the Turin Canon.

In stark contrast to the 12th Dynasty, the 13th Dynasty consisted of about 50 kings ruling for just about 150 years. During this period it is likely that Egypt still was a unified country ruled by one single pharaoh though it is not certain. Even though culture and administration went on without a major interruption, a decline on all levels starts being apparent in the late Middle Kingdom. Scholars theorize that this gradual decline most likely was related to the increasing amounts of foreigners living in the east of the Delta.

Mentuhotep II had his funerary complex at Deir al-Bahri. The design of the mortuary complex was quite innovative as it was integrated with a mountain.

The statues of the Mentuhotep’s often display brute force and the might of the king. The reuniting of Egypt was done by force. For example on a fragment in Gebelein Mentuhotep II is shown smiting and subduing enemies, which is indeed a common theme in Egyptian art, however what is notable is that the enemy is depicted as an Egyptian and not a foreigner which is usually the case in these scenes. Moreover an inscription on the same fragment depicts him as the uniter of Egypt.

The statues of the 12th dynasty show an marked improvement of skill and artistic prowess compared to the 11th dynasty as it is surmised that during the first intermediate period, there was a loss in artistic capabilities.

The burials of the people of the Middle Kingdom is characterized by individuals being placed at their sides so that they can look out of the coffin through two eyes painted on it. The insides of the coffins would often contain spells and inscriptions to help the deceased in the afterlife. Thus the “democratization of the afterlife” for the general populace becomes more prevalent.

The White Chapel of Sesotris I at Karnak, which was a bark station constructed for the religious celebrations also had a list of all the nomes of Upper and Lower Egypt which displayed the power of Sesostris I.

The statues of Sesostris III deviated from the traditional god-like portraits of the Pharaohs to more “realistic” depiction of the king as tired and a little troubled if you will, as you might be as a pharaoh.

Manetho, the priest that was appointed by either Ptolemy I or II to write the history of Egypt put the reign of the 13th dynasty as 453 years, however it is generally agreed that this number probably is a mistake and should be 153 years.

The rulers of the late 12th dynasty had frequent expeditions to the Eastern Desert including Sinai and the Red Sea. These are well attested in historical records as their enterprises left many inscriptions. For the 13th Dynasty, there is less evidence, as expeditions to Sinai are unattested.

It is often impossible to determine whether an object belongs to the 12th dynasty or the 13th because of how art and production went on as usual. That being said, some of the finest works of Middle Kingdom private sculptures were made during the 13th Dynasty.

Having double names was a common thing in the late Middle Kingdom in all levels of society as is confirmed from administrative documents from that time.

By the Middle Kingdom, each king held five names (the so-called fivefold titulary), each of which encapsulated a particular aspect of the kingship: three of them stressed his role as a god, while the other two emphasized the supposed division of Egypt into two unified lands. – Ian Shaw