7 Mythological Creatures from Around the World 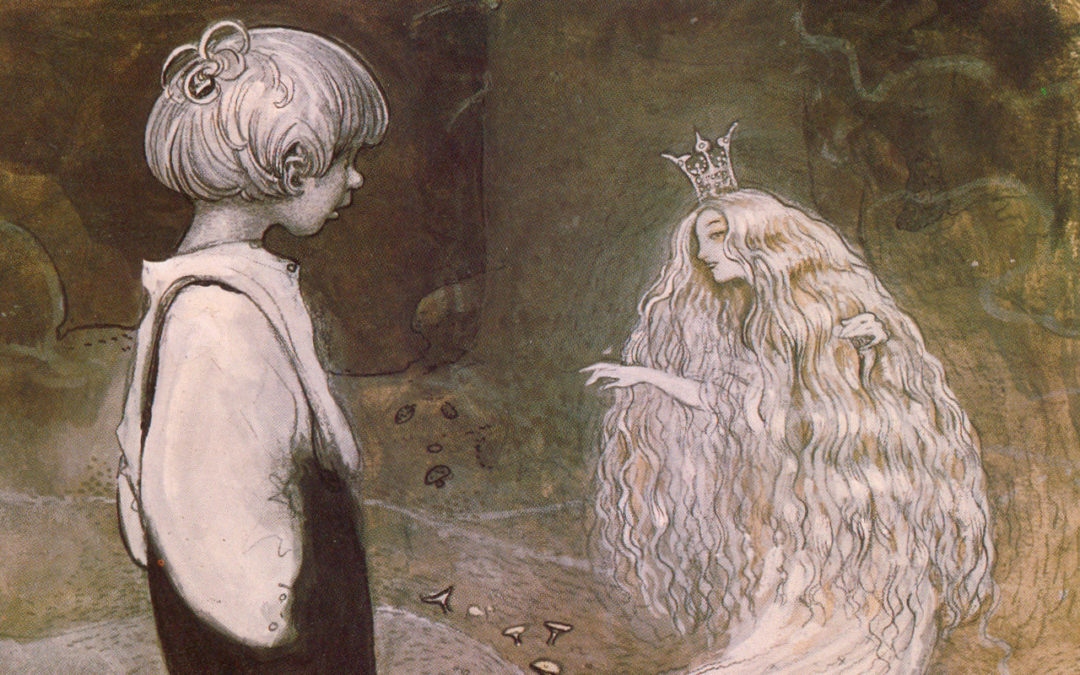 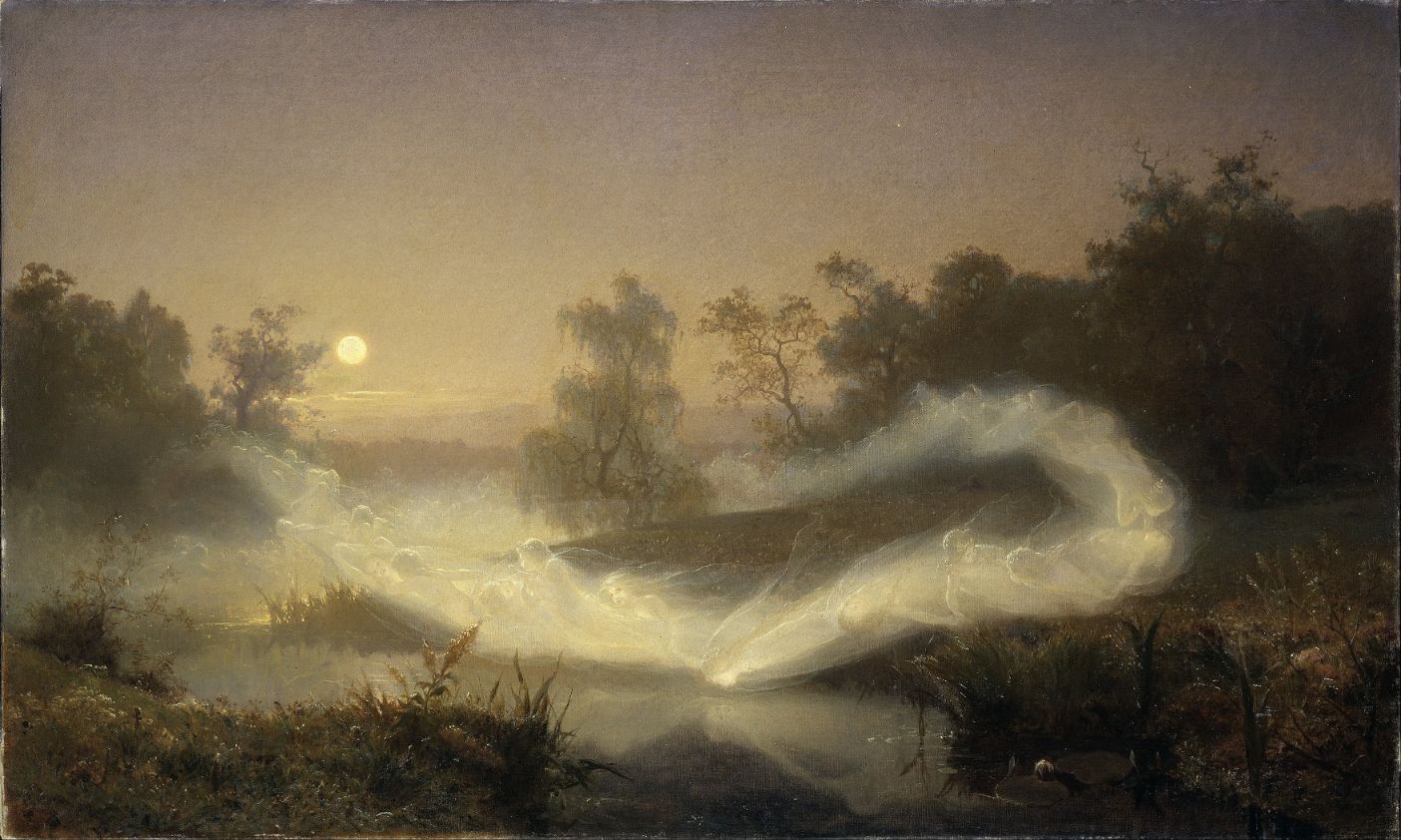 “Älvalek” or “Dancing fairies” by the Swedish painter August Malmström

Belief in fairies is ageless. The strongest traditions of fairies are those of the British Isles and Europe, but belief in fairies has also been found in Asia, America, and Africa. The word “fairy” is used as an umbrella term to describe a wide array of nature spirits. While fairies are generally depicted as magical winged creatures who resemble tiny humans, there are many different fairy races throughout the mythology including Elves, Gnomes, Leprechauns, and Pixies. Fairies were respected as powerful but also dangerous beings, who could be kind, cruel, or just mischievous towards humans.

If treated well fairies are said to bestow good fortune and share their herbal knowledge. Leaving a saucer of milk, cream, butter, or ale for the fairies was said to gain their favour. The fairy folk were not always so helpful however if they felt threatened or insulted by humans. According to legends fairies could curse humans who disturbed their forest. There are also stories of fairies stealing human children, replacing them with a fairy child known as a changeling. If someone has upset the little folk, growing or hanging Marigolds, Primroses, and St John’s wort over doors repels fairies. Iron is thought to be even more powerful; it was not uncommon to carry some iron nails or horseshoes for protection against fairies and their magic. The most famous fairy would probably be Tinker Bell from J.M Barrie’s 1904 play and later novel Peter Pan. 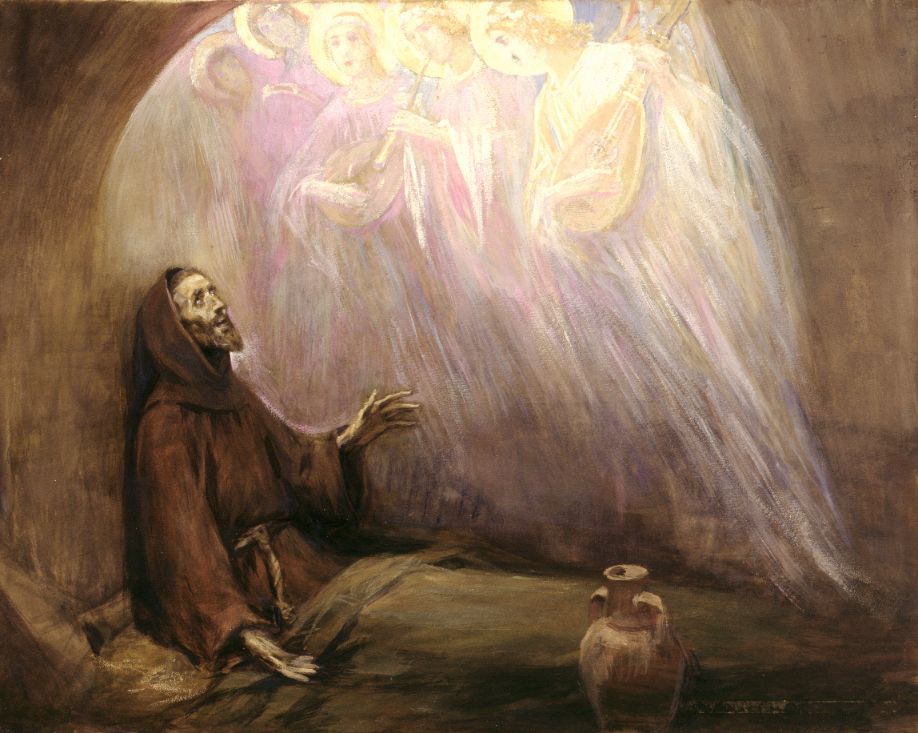 The Choir of Angels and St. Francis by José Benlliure y Gil

Angels are best described as benevolent (though not always) spiritual messengers that gap the bridge between man and the Divine. The image of angels vary significantly depending on which part of world you look at and their not all seen as winged spiritual creatures.

In the Abrahamic religions, that is Judaism, Christianity and Islam, angels are messengers (malachim in Hebrew) that perform specific tasks in direct connection to the Divine. It is also from Christianity that we get the now widespread depiction of angels as luminous human-like entities with big white wings. In Islam it was the “malak” Gabriel or Jibril that imparted the Koran to the Prophet Muhammad.

In world mythology there are many equivalent entities that somewhat correspond to the western concept of angels. For example in Buddhism/Hinduism they are referred to Devas, highly spiritual beings that are characterized by light. In Japan and China there are supernatural beings called the Tennin, who are something in between angels and fairies, they are often depicted as flying spiritual beings that sometimes interact with mortals. 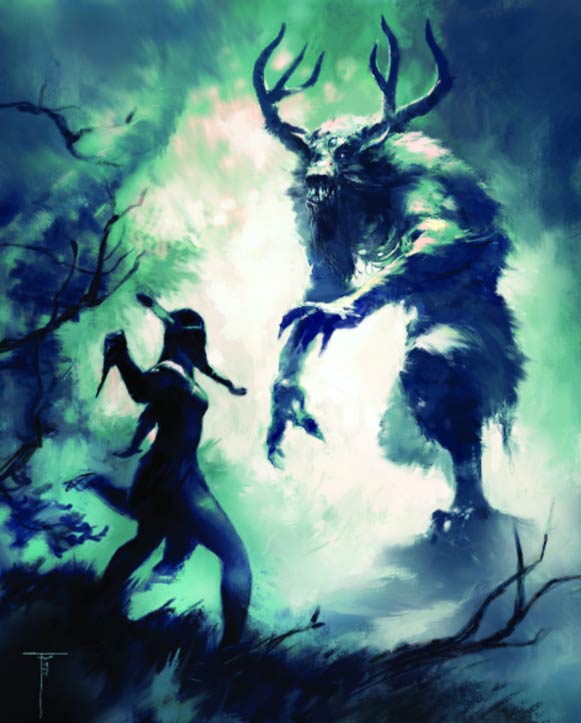 The wendigo is part of the traditional belief system of several Algonquin speaking people. Roughly translated the word “wendigo” means “the evil spirit that devours mankind.” Wendigos are said to inhabit the forests of the Great Lakes and Canada. Wendigos are supernatural entities with an insatiable hunger for human flesh. Wendigos are associated with murder, greed, and cultural taboos. According to folklore wendigos are created when humans turn to cannibalism. Those who give in to their carnivorous desires are cursed with an insatiable hunger for human flesh which can never be satisfied, thus they are always hungry. Wendigo are described as appearing humanlike but taller with long limbs and are extremely thin due to starvation.

A wendigo is said to possess supernatural strength, speed, endurance, and heightened senses. Wendigos also have a human’s intelligence and cunning and can plan their attack accordingly. These creatures can quickly take down a human without a problem but appears to prefer to first terrify their victims first, by stalking them for hours before an attack. Most disturbing however, is the wendigos ability to mimic a human voice, luring victims with cries for help. Wendigos appear in popular culture including films, television, and comics including the television show Supernatural. 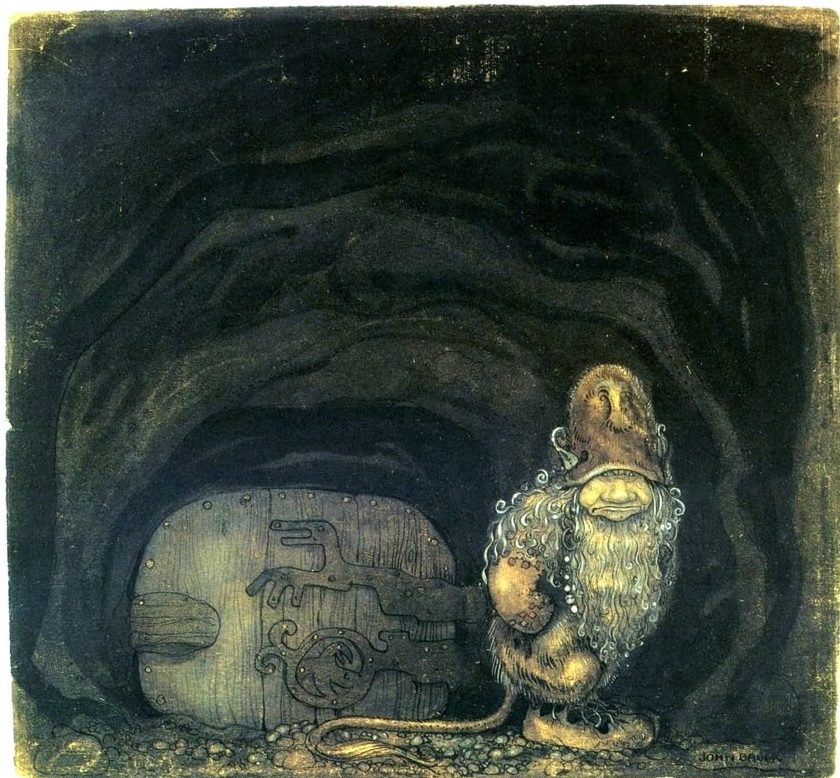 “Troll at the door” by John Bauer

Trolls are creatures from Norse and Scandinavian folklore which live far away from human habitation. Trolls dwell in isolated mountains or caves, often living in small family units. Depending on the sources their appearance varies greatly; trolls can be depicted as ugly and large with grotesque characteristics or look and behave similarly to humans. In some stories there are multiple headed trolls, long tailed trolls, and trolls who only have one eye. The word “troll” is believed to have come from the Scandinavian word “trolleri” which was a type of magic intended to harm others.

Trolls are not considered very friendly towards humans as they have a habit of eating anyone they cross paths with. Trolls are particularly fond of attacking and eating Christians. Trolls are known for being low in intelligence and are quite easy to trick in many stories. In some legends trolls are said to turn to stone when exposed to sunlight, this is offered as explanation for the huge stony crags in places such as Troid-Tindterne (Troll Peaks) in Norway. The noise of church bells is also said to repel trolls. The most famous troll would likely be the troll who appears in the Norwegian fairy tale Three Billy Goats Gruff. 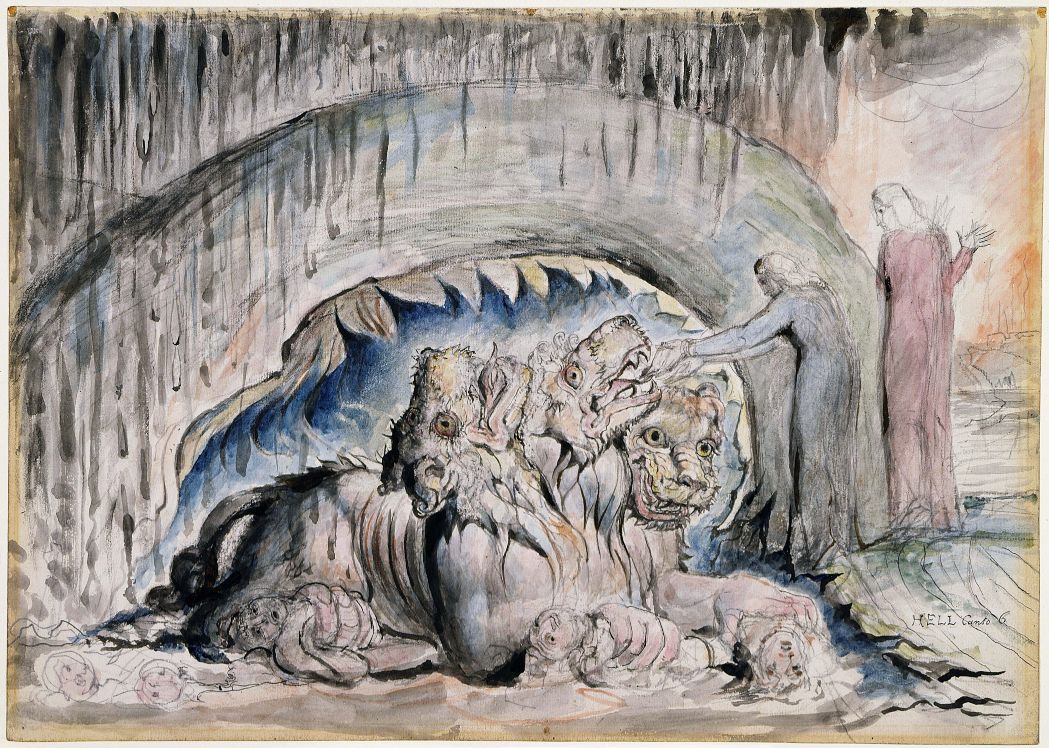 The Hellhound Cerberus depicted in an illustration of Dantes Divine Journey

Hellhounds are monstrous demonic dogs of Hell, also known as “Bearer of Death,” in some European mythology and fiction. These phantom canines are considerably larger than a normal dog, with fur as black as coal and eyes which glow red as flames. Hellhounds have super strength and speed and sometimes even the ability to talk. A hellhound smells of burning brimstone and leaves behind a scorched ground from its burning paws wherever it walks. A hellhound’s claws are hot as fire and threatening to anything which dares challenge it.

According to folklore hellhounds can teleport themselves through different dimensional worlds. Hellhounds were said to guard the entryways to the afterlife or sometimes treasure. Hellhounds could hunt down lost or forsaken souls escorting them either in to or out of hell depending on the story. While generally considered a bad omen, in some stories the hellhound has assisted people by being a devoted guardian. Hellhounds are most closely associated with death. Seeing a hellhound or even just hearing their howl could forecast death for the unlucky person. monsters. The most famous hellhound is most likely Cerberus from Greek mythology. Cerberus was called the “hound of Hades” and is a three headed dog which guards the gates of the Underworld to prevent the dead from leaving. 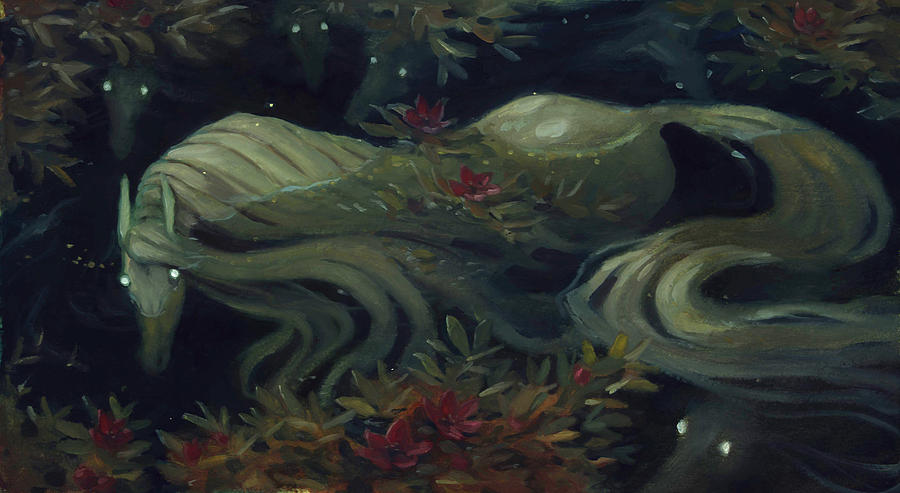 “The Kelpie Pond” by the gifted artist Jaimie Whitbread

The kelpie is the most common water spirit in Scottish folklore often associated with the realm of the faerie. According to historian Douglas Harper the kelpie is defined as “the Lowland name of a demon in the shape of a horse.” This mythological creature is said to inhabit the lochs, rivers, and pools of Scotland. The kelpie usually appears as a beautiful horse or pony; however, it also retains to the ability to also adopt a human form.

Kelpies appear as tame horses or ponies in or around water. Kelpies can be identified by pieces of seaweed caught tangled in their long-wet dripping manes. Travelers would encounter this seemingly tame horse and would become lured to attempt to mount it. Once mounted the riders would find themselves magically stuck to its back. The deadly creature would then dive into deep waters and drown their unfortunate victim. Kelpies could also use their magical powers to summon up a flood in order to sweep travellers into the water Female kelpies would sometimes appear as a beautiful woman dressed in green, who would lure lustful men to a watery doom. A kelpie’s one weaknesses however is its bridle. Anyone who can grab a hold of a kelpie’s bridle will have command over it and any other kelpies nearby. Almost every sizeable body of water in Scotland has an associated kelpie story but the most extensively reported and famous is that of Loch Ness. 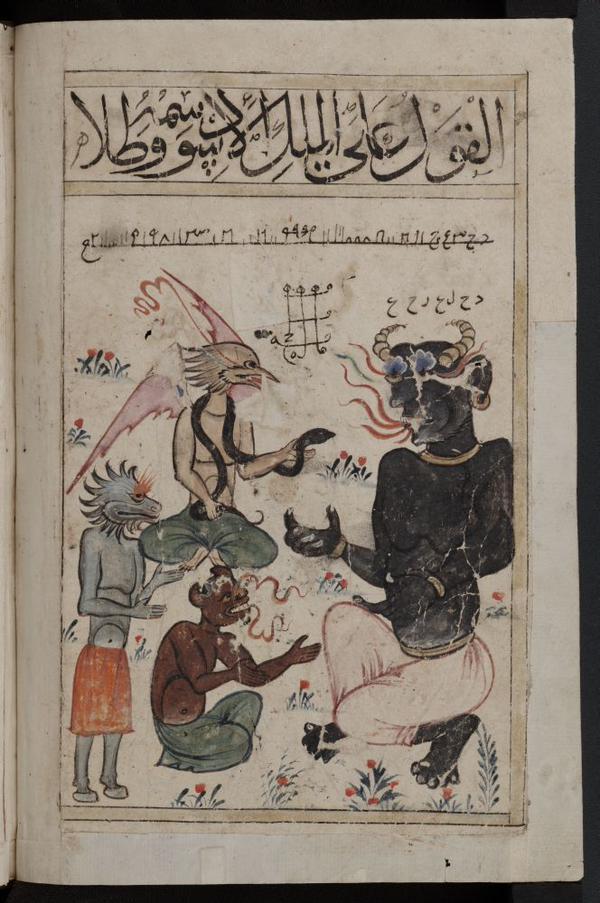 The Djinn also known as the Jinn or Genie are ancient and preternatural beings from Arabic mythology and later Islamic tradition. They are described as a race of spirits below the level of angels and demons who like humans could be either good, bad, or neutral. Djinn are beings of flame or air who can assume human or animal form. Djinn are said to be free of all physical restraints of a body but can still be killed. Djinn enjoy tormenting and punishing humans who harm or offend them either intentionally or not. They are also said to be responsible for many unexplained sicknesses or accidents.

Djinn are said to dwell in inanimate objects such as stones, trees, or ruins. They can also become bound with magic to a worldly item such as a lamp, bottle, or jar and can be forced to grant three wishes to any human who sets it free. Some Djinn when freed with grant the wishes as a thank you without a problem, while others tend to either outright deny the wishes or twist the wording of the wish in an exceptionally dangerous manner to harm their new master. The most famous Djinn would be the Genie which appears in A Thousand and One Arabian Nights story Aladdin and the Magic Lamp

Mythological creatures from folklore, fairytales and mythology has a place in all our hearts in some way or another. They are beacons of the vast potential of the human imagination and perhaps of the possibility of other worldly creatures existing simultaneously in our world.