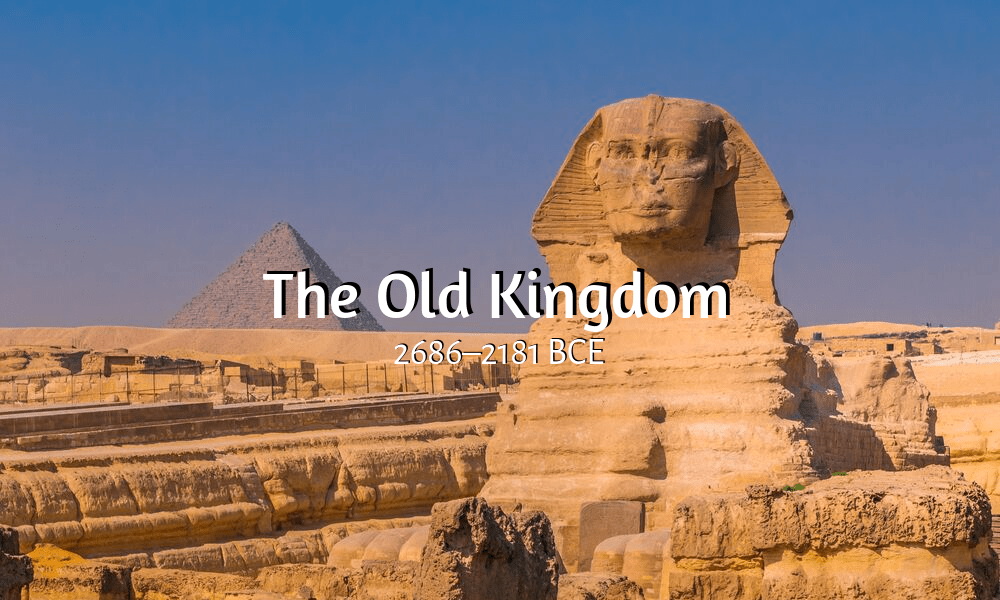 Old Kingdom was the first great age of ancient Egypt. This was the age of the pyramids of the 4th dynasty, including the great ones at Giza, and of the solar kings of the 5th dynasty who broke away from tradition by creating solar temples dedicated to the sun god Ra/Re. The traditions that were set in the Old Kingdom came to last for thousands of years.

The Old Kingdom under Sneferu saw that Egypt became an international power. The policies of Sneferu his expansionism policies led him beyond the borders of Egypt to most notably Lebanon, Sinai.

The construction of true pyramids began with the pharaoh Sneferu. The skills required to build the pyramids wasn’t easy, as is observed in the many trials and errors the pyramid builders had before completing their masterpieces.

False doors, which were religious and artistic representations of a door and threshold between the world of living and of the dead, became popular in the mastabas of the 3rd dynasty and continued well into the 6th dynasty. After the fall of the Old Kingdom, false doors became less popular.

The kings of the 5th dynasty are best known for being the so called solar kings. This meant that most of the pharaohs after Userkaf included the name of the sun god Re/Ra in their own names, like for example Sahure, Shepseskare etc. They also built the famed sun-temples at Abu Gurob (south of Saqqara) in addition to their pyramid tombs which were at Abu Sir.

At the end of the Old Kingdom, the mastabas of the nobility became more prominent and grandiose. The nobles started to grow rapidly at the expense of the pharaoh, which is one of the many reasons believed to have caused the collapse of the Old Kingdom and the start of the First Intermediate Period.

Sneferu sent expeditions to Sinai to mine for turquoise, which was mainly used as an commodity for jewelry.

King Huni of the 3rd dynasty was the first king to write his name in a cartouche, an oval with a horizontal line at one end which was used to signal royalty.

Under the 3rd dynasty, the sun god Ra became the predominant deity and the city Heliopolis (On) became one of the most important cult locations of worship.

Pyramid texts began under the reign of Unas (2375 – 2345 BCE). He was the last king of the 5th dynasty. These texts were spells that would ensure that the king would be granted safe passage to the afterlife.

Under the fifth dynasty the central government became less stringent in their governance. Local feudal families and parties grew in strength and independence.

The third dynasty was a time of great political and cultural progress which transformed Egypt into the richest and most powerful empire during this period. This was a time of great expansion, where Palestine and Sinai in the north and Nubia in the south was incorporated to the country of Egypt. The third dynasty that developed into the Old Kingdom can be said to be the first Egyptian era of greatness.

The 4th dynasty is often called the time of the pyramid builders and marks the beginning of the Old Kingdom.

The Step Pyramid of Saqqara by Djoser was one of the first great stone buildings in history. The height of the pyramid is about 60 meters and the base is 140 x 118 meters. The pyramid consists of 6 giant steps, levels or mastabas placed upon each other. The pyramid was enclosed by a 10 meter wall and within the enclosure were found different places of worship. King Djosers grave was found in a shaft 28 meters below the pyramid. It was constructed by the pharaohs architect and vizier Imhotep, who later became a mythical figure and even deified.

Sekhemhet began building a pyramid at Saqqara but was never finished. This was likely due to contentions and tensions around the throne of Egypt.

Huni also began building a “false” pyramid in Meidum, a little bit south of Saqqara. It wasn’t finished until after the death of Huni, none other than by the great pyramid builder Sneferu.

The Bent Pyramid of Dahshur was Sneferu’s second pyramid.

The Red Pyramid of Dahshur, a third pyramid by Sneferu was also to be his burial place. It is the first large true pyramid constructed in Egypt according to egyptologists. It is located a mile or so east to the Bent Pyramid.

The three pyramids of Sneferu contain more than 3.6 million cubic meters stone. Which is about one third more than the great pyramid of Giza.

The first life-size portraits statues were sculpted and created in the time of Sneferu.

The great pyramid of Giza was built by Khufu (Cheops) which was the successor and son of Sneferu.

The solar ship of Khufu, an fully intact ship found in a pit close to the pyramid of Khufu. It was most likely intended to be used by Khufu in the afterlife.

Chefren and Menkaure built their pyramids close to their fathers/grandfathers Khufu’s great pyramid in Giza. They weren’t as big as Khufus, but together they create a impressive triumvirate that has survived to this day.

The creation of the great Sphinx of Giza, is attributed to Chefren.

Statues of general Rahetep and his wife Nefret from Meidum (4th dynasty) has survived to this day in excellent condition.

The last king of the Old Kingdom, Shepseskaef, didn’t have a pyramid like his predecessors, his tomb was a giant mastaba instead.

We know the names of several sun temples (mainly attested in titles of priests), but only Userkaf’s and Niuserre’s have been found at Abu Gurob.

Figures and statues of seated individuals, most notably enthroned king or kings seated on a throne, became popular during the 3-6th dynasty. Most notably that of Djoser, Khufu, Chephren, Sahure, Pepi I.

A record of the building process of the great pyramid of Giza.

The Palermo Stone is a invaluable basalt stele with text which lists the annals of the kings of Lower Egypt. It was created and written probably sometime around 2400 BCE or in the 5-6th dynasty. This makes it one of the oldest historical texts preserved from ancient Egypt. Beginning with the god Horus and then Menes, it lists all the kings and their each regnal year up to the 5th dynasty.

The kings of the fifth dynasty also built pyramids but they were considerably smaller in size than that of the previous dynasty.

The vast majority of the major pyramids are found in the cities of Saqqara, Zawiyet el Aryan, Dahshur, Giza and Abusir.