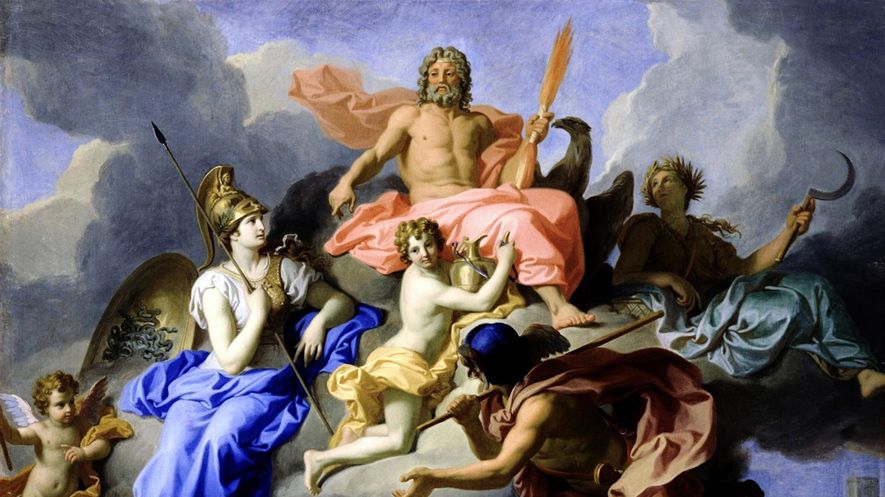 The Olympians were the principal gods and goddesses in Greek mythology. They rose to power when Zeus revolted and led his siblings to war against the Titans. Six of the Olympians were siblings, namely Zeus, Poseidon, Hades, Hera, Demeter and Hestia. They were the offsprings of the titans Cronus and Rhea.

The titans were the deities that dominated the world before the emergence of the powerful sky god Zeus. After securing their supremacy over the universe, these deities chose to live on a top of Mount Olympus, hence the name “The Twelve Olympians”. The king and queen of the Olympian deities were Zeus and Hera.

When the Olympians gained supremacy over the world. The brothers, Zeus, Poseidon and Hades divided the world into three major realms in which to exercise their power. Each realm was to be ruled by each brother. I’m not sure why the sisters weren’t included in this lottery, but they simply weren’t, in any case, Zeus became the ruler of the sky, Poseidon became the ruler of the sea, and the underworld fell in to the hands of Hades. The Earth and Mount Olympus was to be ruled by all the Olympian Deities but that wasn’t always the case. Zeus had a way to impose his will on the rest of them.

“Poseidon speaks: We are three brothers born by Rhea to Kronos, Zeus, and I, and the third is Haides, lord of the dead men. All was divided among us three ways, each given his domain. I when the lots were shaken drew the grey sea to live in forever; Haides drew the lot of the mists and the darkness, and Zeus was allotted the wide sky.”
Homer, in the Illiad

The Myth of Zeus vs Cronus

Uranus was the first and earliest ruler over the world. His son Cronus overthrew his father reign and subsequently acquired dominion over the world. Cronus married his sister Rhea and fathered six children with her: Hestia, Demeter, Hera, Hades, Poseidon and Zeus. Before Cronus killed his father, his father’s last words was a prophecy that his children, or more specifically his own son, would overthrow him in the same way that he had done to him. To avoid this fate, Cronus decided to consume all of his children, their only crime being that they were born. He managed to devour five of the oldest children before their mother Rhea with cunningness managed to save the youngest son, Zeus. Instead of handing Zeus over, she gave her husband stones wrapped in swaddling bandages to make it look like a baby, which Cronus immediately devoured without hesitation.

After this series of events, Rhea carefully hid the young Zeus from his father and placed him in the care of the nymph Amalthea, she raised him as her own in a cave located inside the mountain Dikti on the island of Crete. Amalthea raised and fed Zeus with the milk of a goat, and in order for the wailing of the child would be concealed from his father, she would elaborately arrange the Korybantes, servants and priestess of Rhea, to perform noisy war dances, where they shouted and clashed their spears against their shields.

When Zeus had grown into a fine and strong god, he confronted his father Cronus and compelled him to throw up his devoured siblings through the aid of an emetic created by Gaia (The Earth goddess and the wife of Uranus). After Zeus seized the power from Cronus and secured his dominion over creation, he split the dominions of creation into three main spheres. The sea and ocean which Poseidon became the king of, the underworld which became the kingdom of Hades, and the sky and rest of creation which Zeus reigned over.

However before the reign of the Olympians was completely secured, the titans and giants invaded Olympus in order to stop and defeat Zeus. After a fierce and intense battle which all the gods were involved with, the Olympians came up on top and decisively became the rulers of all creation.

The list of the all Greek Olympian deities by name, domain of power, and representative symbols.