The Myth of Pandora’s Box and Epimetheus 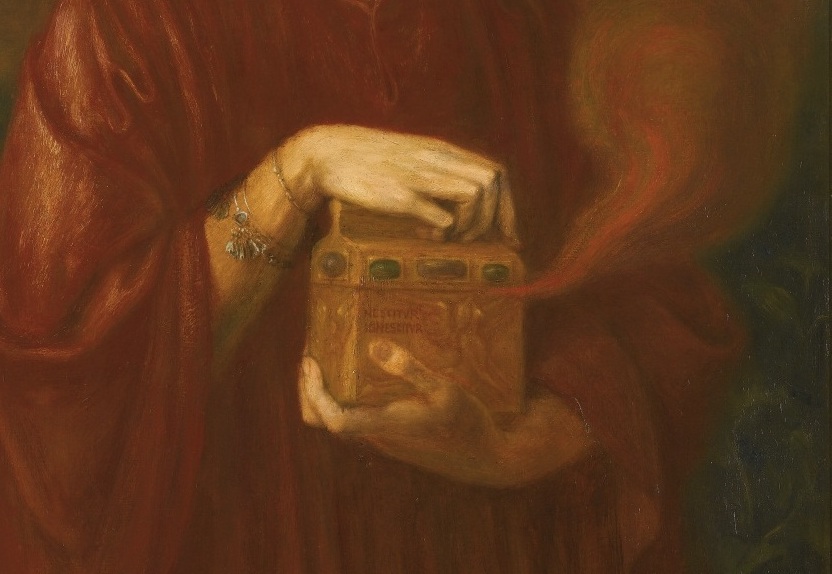 When Prometheus successfully stole fire from the gods to give back to the humans, the humans stopped caring about the Gods. Zeus who witnessed this ungodliness decided to inflict a great disaster upon them, in order to return them to the worship of the gods. So he commanded Hephaistos, the god of craftsmanship, to fashion a woman through earth and water and to imbue her with life. The newly created woman was embellished and adorned by the goddess Athena and Aphrodite with beauty, skill and wit, and the shrewd Hermes taught her adaptability and flattery. They named her Pandora, the “all gifted one”. 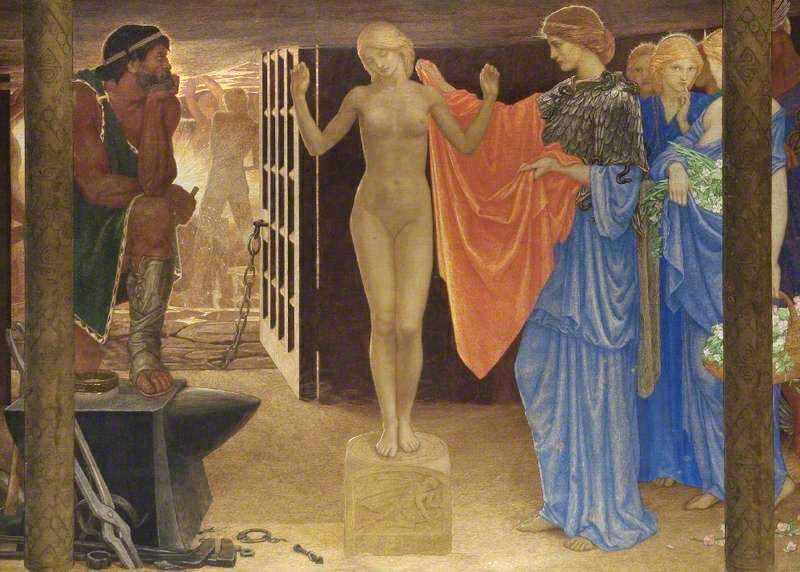 The Creation of Pandora by J. D. Badden

Hermes brought her to the brother of Prometheus (forethought), namely Epimetheus (afterthought). Though Prometheus had warned his brother not to accept any gifts from Zeus, Epimetheus didn’t care about the warning and welcomed the beautiful woman into his home. As a gift for his home, Pandora brought with her a well sealed box. When she settled in her new home, she opened the box and from it escaped all the sicknesses, plagues and misfortunes that would hence haunt and torture man. Only hope remained, at the bottom of the box, and Epimetheus who was horrified hastily closed the lid of the box. This is why hope never leaves us humans despite the misfortunes that life brings.

So he ordered. And they obeyed the lord Zeus the son of Cronos. Forthwith the famous Lame God moulded clay in the likeness of a modest maid, as the son of Cronos purposed. And the goddess bright-eyed Athene girded and clothed her, and the divine Graces and queenly Persuasion put necklaces of gold upon her, and the rich-haired Hours crowned her head with spring flowers. And Pallas Athene bedecked her form with all manners of finery. Also the Guide, the Slayer of Argus, contrived within her lies and crafty words and a deceitful nature at the will of loud thundering Zeus, and the Herald of the gods put speech in her. And he called this woman Pandora (All Endowed), because all they who dwelt on Olympus gave each a gift, a plague to men who eat bread.

But when he had finished the sheer, hopeless snare, the Father sent glorious Argus-Slayer, the swift messenger of the gods, to take it to Epimetheus as a gift. And Epimetheus did not think on what Prometheus had said to him, bidding him never take a gift of Olympian Zeus, but to send it back for fear it might prove to be something harmful to men. But he took the gift, and afterwards, when the evil thing was already his, he understood.

For ere this the tribes of men lived on earth remote and free from ills and hard toil and heavy sickness which bring the Fates upon men; for in misery men grow old quickly. But the woman took off the great lid of the jar with her hands and scattered all these and her thought caused sorrow and mischief to men. Only Hope remained there in an unbreakable home within under the rim of the great jar, and did not fly out at the door; for ere that, the lid of the jar stopped her, by the will of Aegis-holding Zeus who gathers the clouds. But the rest, countless plagues, wander amongst men; for earth is full of evils and the sea is full. Of themselves diseases come upon men continually by day and by night, bringing mischief to mortals silently; for wise Zeus took away speech from them. So is there no way to escape the will of Zeus.

Hesiod in Works and Days