The Story of Perseus and Medusa, the Snake-Haired Gorgon 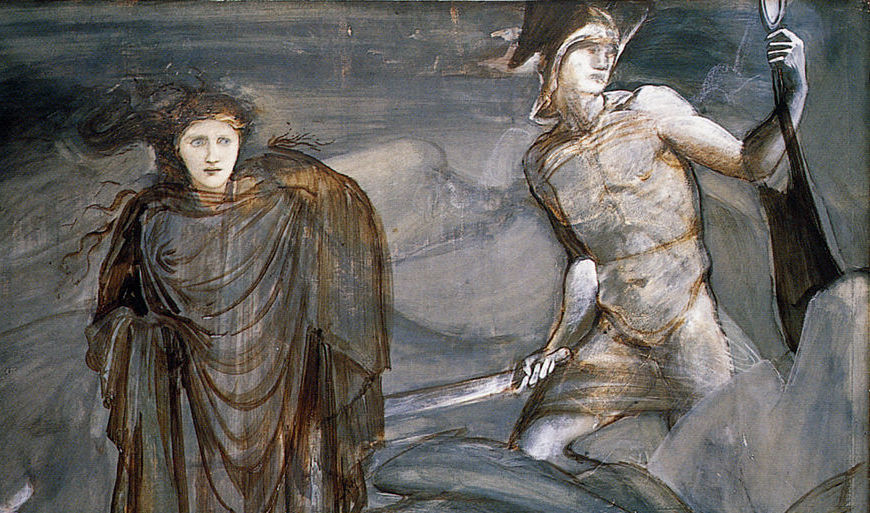 The story of Perseus, like many Greek myths, begins with a prophecy, a prophecy that Acrisius, the king of Argos, received from the Oracle of Delphi. Acrisius went to the Oracle for guidance and wisdom but left with a prophecy of his doom and demise instead, a prophecy which foretold that he would in the future be killed by his grandson, the son of his daughter. Terrified by the words uttered by the Oracle he decided to lock up his only daughter Danaë in a subterranean chamber made from copper.

However Zeus, who had fallen in love with her, manifested as a shower of gold upon her prison chamber and somehow impregnated her. Danaë gave birth to a son, Perseus. Though Danaë managed to hide her son from her father Acrisius for a couple years, he later found out about the existence of his grandson and decided to get rid of him. Acrisius didn’t dare to kill his grandson as he knew that he was the son of the sky-god Zeus. Instead he enclosed Danaë with her child in a wooden chest and dumped them both into the sea.

Perseus and his mother didn’t die however, the waves carried them to the island Seriphos, where Dictys, a brother of the king of the island, Polydectes, caught them in his nets and brought them to land. Danaë and Perseus were received with hospitality and kindness by Dictys, and it is on Seriphos where Perseus would grow up to be a powerful and robust young man.

Like Zeus before him, the king of the island, Polydectes, had become infatuated with love and lust for Danaë. To increase his chances of securing his new found love, he sought to get rid of Perseus. Through cunning and insidious cleverness he managed to convince Perseus to go after the Medusa and bring him her head, as he thought Perseus wouldn’t return from this dangerous quest. Medusa was a gorgon, a notorious female monstrosity, who through her gaze turned everyone who looked at her into stone. 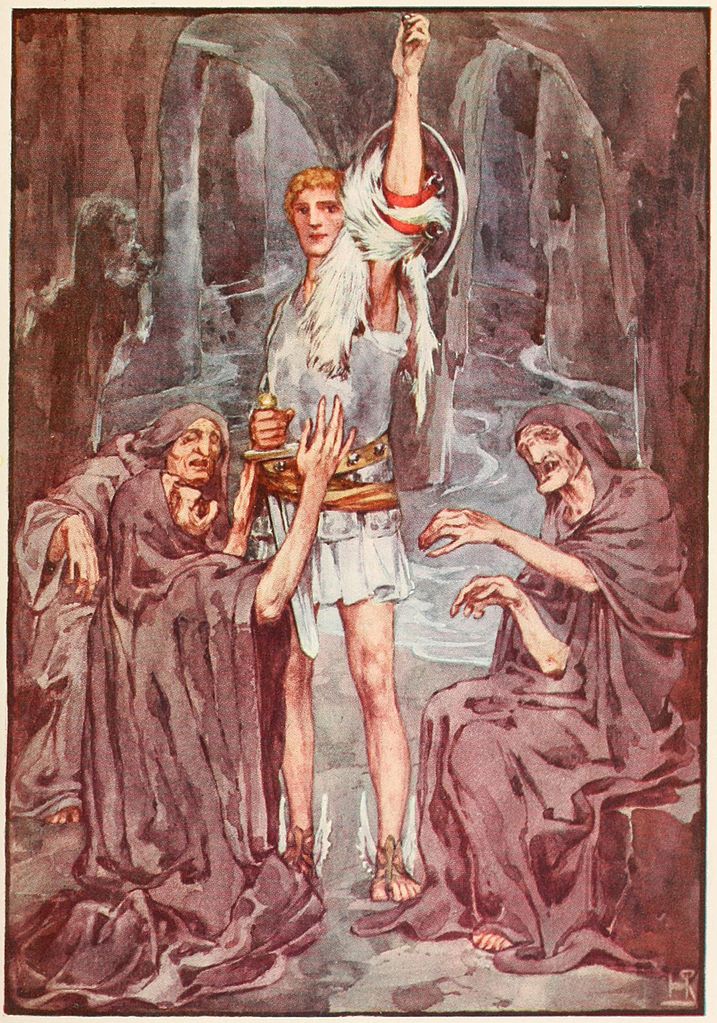 Perseus and the three Graeae

When Perseus was wandering by the shore, Athena and Hermes suddenly appeared before him and bestowed upon him their blessings and aid through his perilous and risky journey. Athena instructed him to seek out the Hesperides, powerful nymphs entrusted with the weapons he needed to fight Medusa. First Perseus headed to the Graeae, who were sisters of the Gorgons. The Graeae, named Deino, Enyo, and Pemphred were three sisters who were perpetually old and physically abominable women, which together shared one eye and a tooth, which they alternated between each other. When Perseus couldn’t get them to tell him what he wanted to know, he snatched the eye and tooth from one of them just as they were about to pass it on to the next. Holding the eye and tooth as ransom, they revealed to him the path which led to the cave of the Hesperides. In the cave he received a special knapsack from the nymphs to carry the head of the Medusa, and Hades’ helm of darkness which turned the wearer invisible, and an adamantine sword/sickle hybrid weapon called Harpe from his father Zeus, and lastly a polished shield that was bright as a mirror which he would later use to avoid the lethal gaze of Medusa. 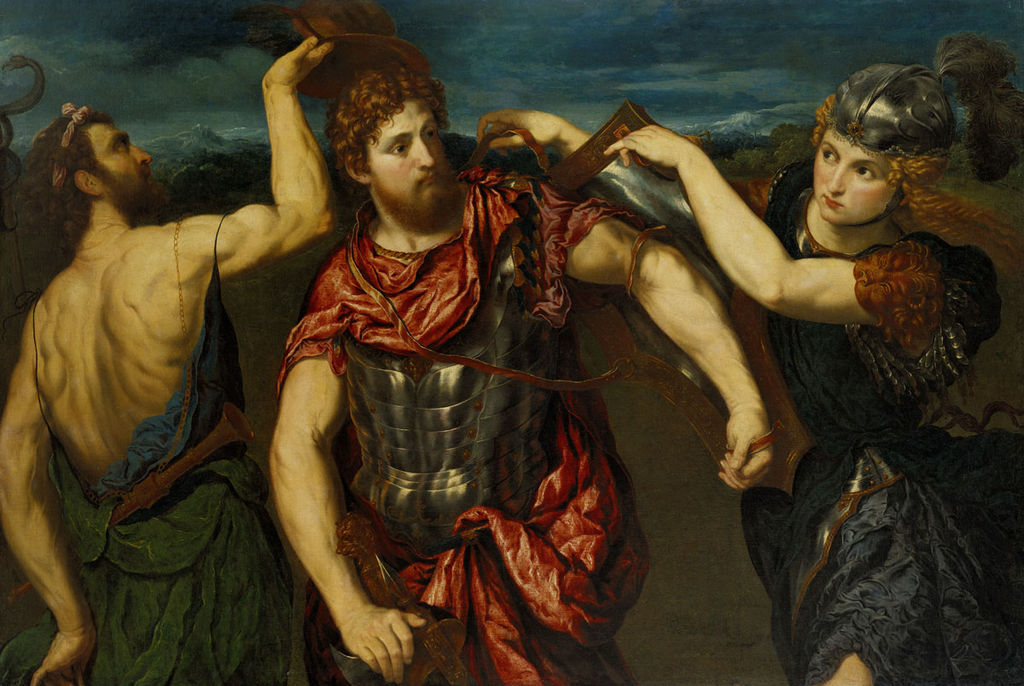 Fully prepared, he sailed west, to the edge of the world, where the three gorgons, Medusa, Stheno and Euryale had their abode. When he arrived he carefully snuck up on them in their cave, using his shield as a mirror to avoid any supernatural dangers ahead of him. He found them all sleeping in a deep slumber and decided to target Medusa. As he approached Medusa with a diverted gaze, he drew his adamantium Harpe from its sheath and with one powerful stroke decapitated Medusa, separating her head from her body and putting it in his knapsack. From the body of Medusa there emerged the winged-horse Pegasus and the giant Chrysaor, which were the result of Poseidon’s mating with Medusa. The sisters of Medusa woke up from their slumber, but Perseus used his helm of darkness to turn invisible, as he escaped.

Perseus, Andromeda and the Sea-Serpent Cetus

On his way home, Perseus passed through the land of Ethiopia, where King Cepheus ruled. His wife, queen Cassiopeia, had boasted that her daughter was more beautiful than the Nereids, i.e. the nymph daughters of the sea god Nereus, which brought the ill-will of the nymphs. When the nymphs complained to Poseidon about this shameful act by the queen, Poseidon unleashed a great flood over the lands as well as a terrible serpent beast called Cetus, which devastated the lands. Seeking guidance Cepheus consulted the oracle, who told him that the only way to save his kingdom from the beast was to sacrifice his beautiful daughter Andromeda. The king refused but the people forced him to obey the oracle’s command against his will, so they captured his daughter and chained her to a cliff along the seashore.

At this same moment, Perseus had just arrived from the west after killing Medusa, and when he saw this beautiful girl fastened to the rock, he lowered himself to the ground, and was stricken with love for her. Andromeda managed to tell Perseus all about this terrible situation she found herself in. And just moments after there was a violent raging commotion out in the sea, and the beast appeared from the depths and swam towards the beach to seize its prey. Perseus turned to the girl’s parents, who were trembling with terror from a distance, promising to kill the beast only if he could take Andromeda as his wife. Cepheus, with nothing to lose, gladly accepted his offer. So then, Perseus moved courageously towards the sea-monster, and after a terrible battle, Cetus lay dead on the beach and Perseus was victorious.

Shortly thereafter, Perseus returned to Seriphos with his ‘newly-won’ spouse. There King Polydectes had tried to force his mother Danaë into marriage by force. The son arrived just at the right time to save his mother. So he pulled out the head of the Medusa to petrify Polydectes into solid rock. 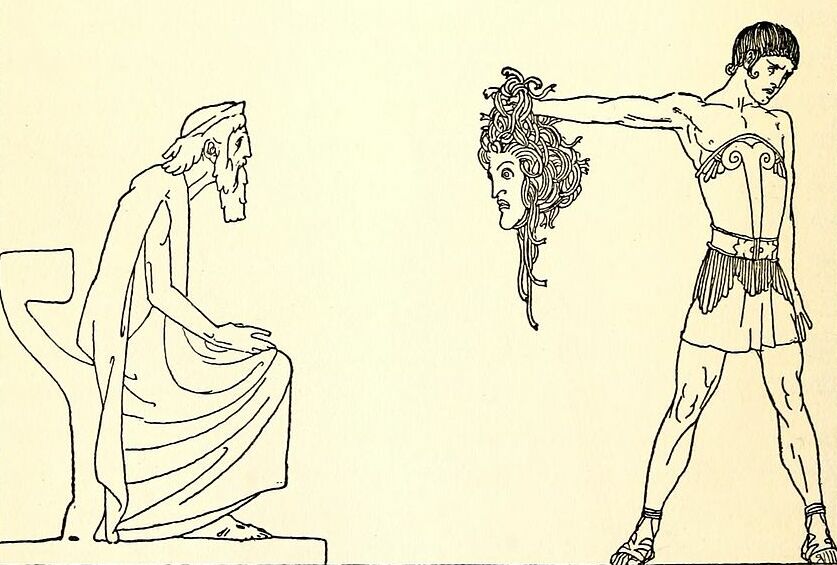 Perseus then handed over the king’s dominion over the island to his brother Dictys. And then he gave the winged shoes and helmet back to Hermes, and Athena received from him Medusa’s head, which she fastened in the middle of her breastplate.

After finishing his business in Seriphos, Perseus returned with his mother Danaë and Andromeda to Argos. His grandfather Acrisius, fearing the oracle’s prophecy, had moved to Larissa in Thessaly. Perseus visited him and reconciled with him and tried to persuade him to return to Argos.

But before they set off, they played some games in town. In doing so, Perseus had the misfortune of throwing a discus, which struck Akrisios with such force that he fell to his death to the ground. Thus the prophecy that the oracle had prophezied so many years back was fulfilled.

Perseus deeply mourned the death of his grandfather and gave him a proper burial before sailing off to Argos.

Gorgones who dwell beyond glorious Okeanos (Oceanus) in the frontier land towards Night where are the clear-voiced Hesperides, Sthenno, and Euryale, and Medousa (Medusa) who suffered a woeful fate: she was mortal, but the two were undying and grew not old. With her lay the Dark-haired One [Poseidon] in a soft meadow amid spring flowers. And when Perseus cut off her head, there sprang forth great Khrysaor (Chrysaor) and the horse Pegasos (Pegasus) who is so called because he was born near the springs (pegai) of Okeanos.
Hesiod in the Theogony