The Story of Phaethon and the Solar Chariot 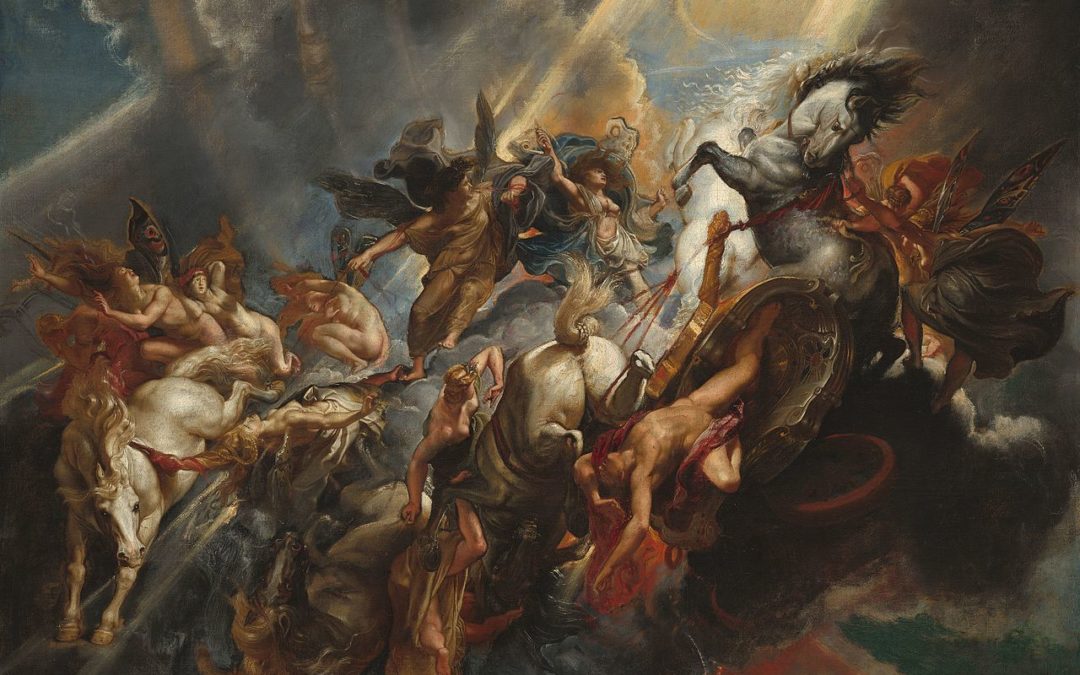 Phaethon was the youthful son of the sun-god Helios and the Oceanid nymph Clymene. As a boy growing up he occasionally lived with his father in his golden palace in the sky but mostly with his mother down on the surface of the earth. Amongst his friends on earth he was always admired for his elegance, beauty and skill in every art and sport which he participated in. When he told his friends that this was due to him being the son of the sun god Helios, no one believed him. This frustrated the young Phaethon and he decided to go to Helios to ask him of a favour. He asked that if he really was his father he would grant him one wish, as he believed that this was the only way to convince his peers of his divine nature.

Helios who loved his son dearly, swore an solemn but costly oath, that he would grant his son whatever he wished for. Phaethon was overjoyed and told him:

Helios was appalled by this request and he deeply regretted swearing his oath to his son. He tried to convince Phaethon to refrain from this dangerous wish, and he tried to describe the numerous dangers involved with steering the solar chariot, because only the sun-god was capable of riding the chariot and steer the unstable fiery horses, he added that he dared not even to give the reins to the all-mighty king of the gods Zeus himself. This tirade and admonishment from Helios only made Phaethon more eager to have his wish granted, and Helios was forced to give way, and as they say, no god has the power to break his or her promise.

When Helios realized that Phaethon would steer the golden solar chariot for one day, he began advising and guiding him on how to best perform this supremely important task at hand. Just before dawn the sun god tied the reins to the horses and handed them over to Phaethon. Phaethon stepped into the chariot and was pulled by the fiery horses as they ascended to and across the sky. After a while the horses felt that something was wrong, the hands that held the reins behind them were not the same strong hands as usual. Their flight was altered from its proper course as they started flying closer and closer to Earth. Phaethon’s horror grew with each moment as he realized his own incapability to steer the chariot. Fiery sparks flared from the nostrils of the horses as they descended to the surface of the Earth. Mountain peaks started going ablaze as thick smoke arose hither and thither. The unbearable heat gradually dried out the springs and the rivers started boiling, and some peoples of the earth were scorched black. People and cattle screamed to the skies in utter disbelief and terror.

Zeus, the all-seeing one, who sat on his throne high up on Olympus, recognized this imminent danger to Earth. He saw that everything would be destroyed, all the lands and living creatures would be incinerated and annihilated. He then took one of his bolts of lightning and hurled it against the solar chariot which Phaethon was in. The lightning bolt hit him right in his chest and he fell from the chariot, down to the river Eridanos. 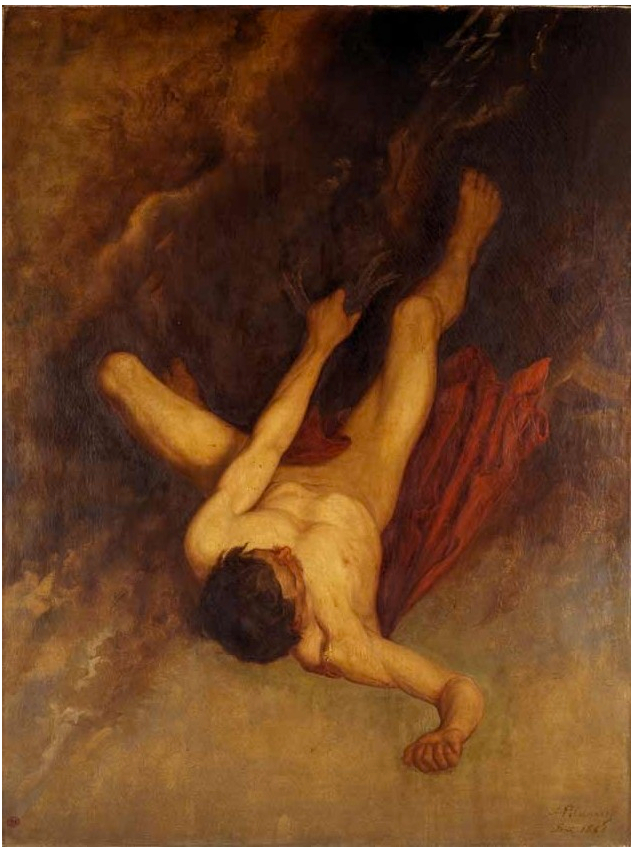 The Fall of Phaethon by Adolphe Sunaert (1868)

As he fell, there was a eerie sight in the sky as it looked like a falling star. Phaethon died, and the horses managed to retake their proper path across the sky as they slowly returned to the stable of their master Helios.

When Phaethon died, he was mourned by his three sisters, the Heliades. They wept incessantly and refused to be comforted by anyone or anything. The goddess Athena who witnessed this sorrow felt compassion towards them, and decided to transform them into larch trees to ease their suffering. These trees have since then shaded the beaches of Eridanos, and from these trees tears are still flowing, which the sun turns into amber. 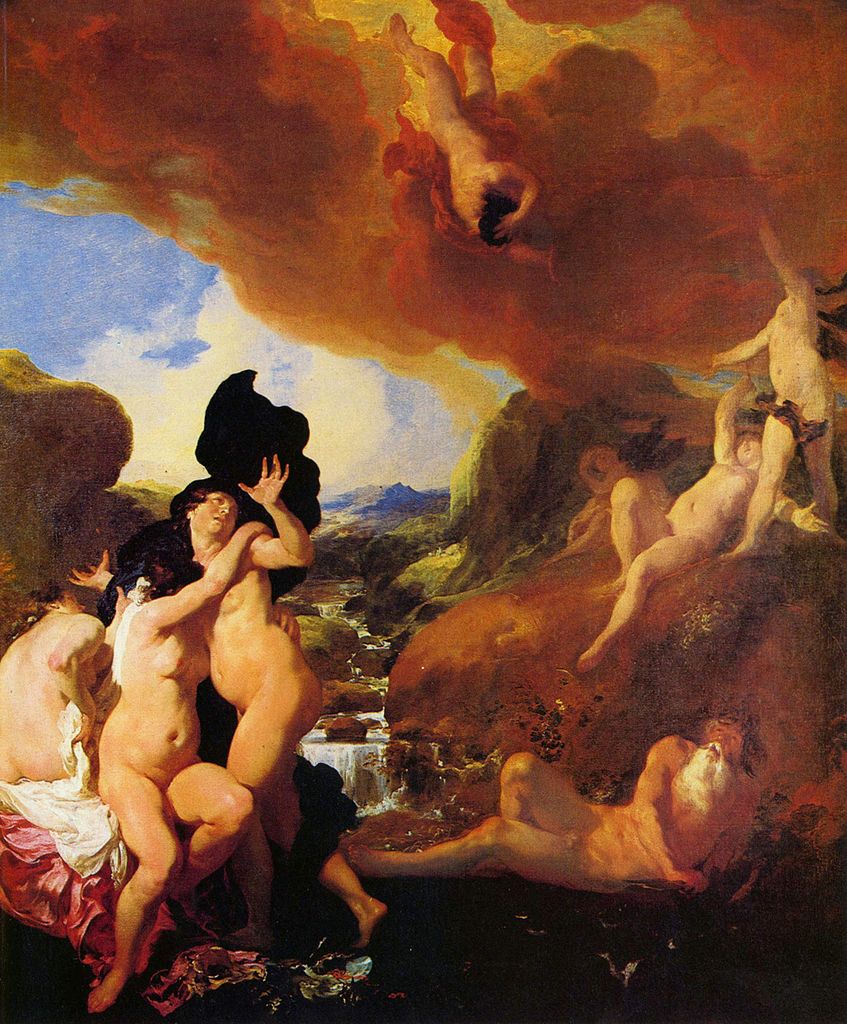 Here Phaeton still gaining on th’ ascent,
To his suspected father’s palace went,
‘Till pressing forward through the bright abode,
He saw at distance the illustrious God:
He saw at distance, or the dazling light
Had flash’d too strongly on his aking sight.

Planets. It remains for us to speak of the five stars which many have called Wandering, and which the Greeks call Planeta (Planets) . . . The second star [Saturn] is that of [i.e. belongs to] Sol [Helios]; others say of Saturnus [Kronos]. Eratosthenes claim that it is called Phaethon, from the son of Sol. Many have written about him–how he foolishly drove his father’s chariot and set fire to the earth. Because of this he was struck with a thunderbolt by Jove [Zeus], and fell into the river Eridanus, and was conveyed by Sol to the constellations.

Pseudo-Hyginus in the Astronomica 2. 42

Many poets and historians give the story that Phaethon, the son of Helios, while yet a youth, persuaded his father to retire in his favour from his four-horse chariot for a single day; and when Helios yielded to the request Phaethon, as he drove the chariot, was unable to keep control of the reins, and the horses, making light of the youth, left their accustomed course; and first they turned aside to traverse the heavens, setting it afire and creating what is now called the Milky Way, and after that they brought the scorching rays to many parts of the inhabited earth and burned up not a little land. Consequently Zeus, being indignant because of what had happened, smote Phaethon with a thunderbolt and brought back the sun to its accustomed course. And Phaethon fell to the earth at the mouths of the river which is now known as the Pados (Po), but in ancient times was called the Eridanos, and his sisters [the Heliades] vied with each other in bewailing his death and by reason of their exceeding grief underwent a metamorphosis of their nature, becoming poplar trees.

Diodorus Siculus in the Library of History 5. 23. 2 (translation by C. H. Oldfather)

There have been, and will be again, many destructions of mankind arising out of many causes; the greatest have been brought about by the agencies of fire and water, and other lesser ones by innumerable other causes. There is a story that even you [Greeks] have preserved, that once upon a time, Phaethon, the son of Helios, having yoked the steeds in his father’s chariot, because he was not able to drive them in the path of his father, burnt up all that was upon the earth, and was himself destroyed by a thunderbolt. Now, this has the form of a myth, but really signifies a declination of the bodies moving in the heavens around the earth, and a great conflagration of things upon the earth, which recurs after long intervals.

Plato in the Timaeus (written in 360 BCE, translated by Benjamin Jowett)