Poseidon: The God of the Sea in Greek Mythology 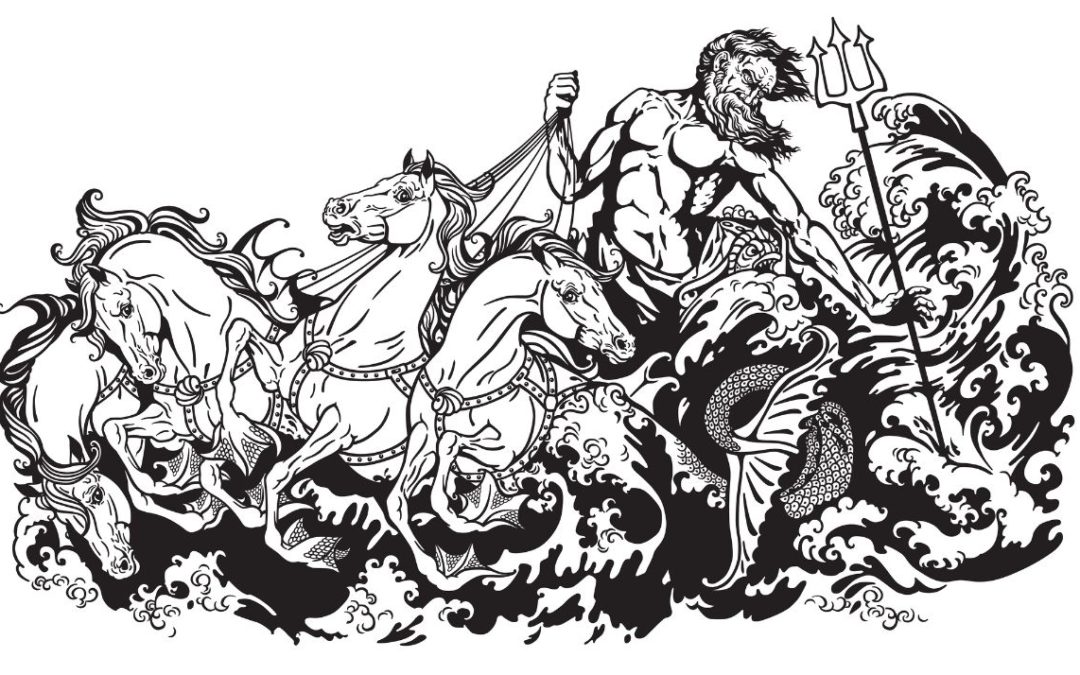 Poseidon was one of the more powerful gods in Greek Mythology and is one of the Olympian deities. Brother of Zeus, Hera, Hestia, Demeter and Hades, he was born of the titans Cronus and Rhea. He is mainly known as the God of the Sea, but some mythical traditions also placed the realm of earthquakes in the domain of Poseidon’s powers. He was furthermore known as the tamer of horses, most likely due to the imagination of the ancient Greeks when seeing the waves of the sea behaving like galloping horses, and this made him subsequently known as the horse god to the Greeks. Unlike his siblings Poseidon does not live on Mount Olympus, but has his golden palace submerged deep in the depths of the sea, where he has his throne alongside his spouse Amphitrite. The Olympian gods gained supremacy over the world when revolting against and defeating their parents and the Titans. Poseidon was one of these gods and his main weapon was his magnificent trident. In his power lies the total control of the winds and when he bumps his trident against the sea, it rises with twisted waves and threatens all the sailors with death and destruction. He can also shake the earth in its foundations, crush rocks and allow islands to rise out of the water or disappear beneath its surface.

Alongside his trident, the dolphin was another symbol for Poseidon. Poseidon was worshiped mainly on the coast and by the seafarers, especially in the city of Corinth, in whose vicinity the Isthmian games were celebrated in his honor.

Poseidon and his five siblings came into power when Zeus lead the revolt against the titans. When they succeeded in defeating the ancient titans, the world got divided into three major realms. Each realm ruled by each brother. Poseidon became the ruler of the sea, Zeus became the ruler of the sky, and the underworld fell into the hands of Hades. The earth and Mount Olympus were governed by all the gods together. Zeus is also known as the king of the Gods, and Poseidon was generally viewed upon as the 2nd most powerful god. Hades as we mentioned, wasn’t so lucky. Just by judging by the sound of his domain, “The underworld” it doesn’t seem to be all that pleasant.

Poseidon, just as all the other gods has countless of roles in Greek myths. From the creation of the abominable Minotaur to the numerous love affairs with various mortals and goddesses.

The Contest with Athena 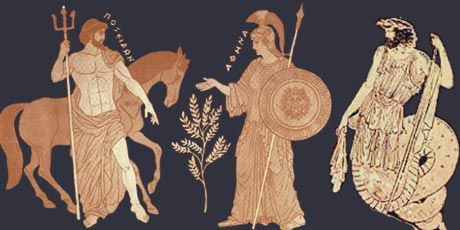 Poseidon and Athena offering their gifts to Athens.

One of the more famous stories involving Poseidon is the rivalry and subsequent contest for the city of Athens. The story goes as follows. Once there was a king, by the name of Cecrops, he was the king of a magnificent city who had no name. Seeking the blessings of the gods, he decided to pray. Poseidon, known for his greedy nature responded. One of the other gods, namely Athena, responded as well. The deities were asked to provide the city with a gift so that they could choose their patron and protector over the city. Poseidon began, and struck the ground with his trident where a horse and a spring suddenly emerged. The people were amazed, but when they tasted the water it was salt-water, which isn’t as you might have imagined, all that good for Poseidon. Athena conjured an olive tree. The people were ecstatic because of the beauty and diverse utility of this magnificent plant. The people choose their goddess and patron. The city was named Athens.

Anyone who’s lost a competition one really cares for know the disappointment that could suddenly come over you when you find yourself losing. Poseidon all though a mighty god, wasn’t an exception. For the people’s decision, he flooded the Attic plains. Which is exactly what you would expect from a angry god who’s main domain of power is the sea.

The Fury of Poseidon and the Birth of the Minotaur

The birth of the half-man and half-bull creature, the Minotaur, was the direct cause of an action by Poseidon. When the king of Crete, Minos, prayed to the gods for a blessing. Poseidon answered him by sending forth a beautiful, snowy bull. When the king witnessed the sheer beauty and gentleness of the creature, he was mesmerized. He couldn’t for even a second think of taking the life of such a wonderful creature. Poseidon expecting a sacrifice of the bull that he generously sent forth, was surprised and furious when King Minos sacrificed another bull from his own herd. And remember kids, what ever you do, don’t make a god angry. Poseidon responded by inflicting a most peculiar condition on the king’s wife, Pasiphaë. She was suddenly overwhelmed with an insatiable sexual lust for the divine bull sent by Poseidon. By approaching the artificier Daedalus, she convinced him to construct a wooden hollow cow, in order to mate with the bull. The result was, something else. The body of a man, but with the head of a bull. It was called the Minotaur.

Another bizarre myth involving Poseidon, is one where he shape-shifts into a stallion in order to mate with his sister, the goddess Demeter. It begins with Demeter searching after her daughter, and noticing that she was being followed by someone, she turned herself into a mare. Poseidon realizes this, and responds accordingly by turning himself into a horse. And from the union of these two deities was born the most magnificent horse. The fastest steed of them all, Arion. 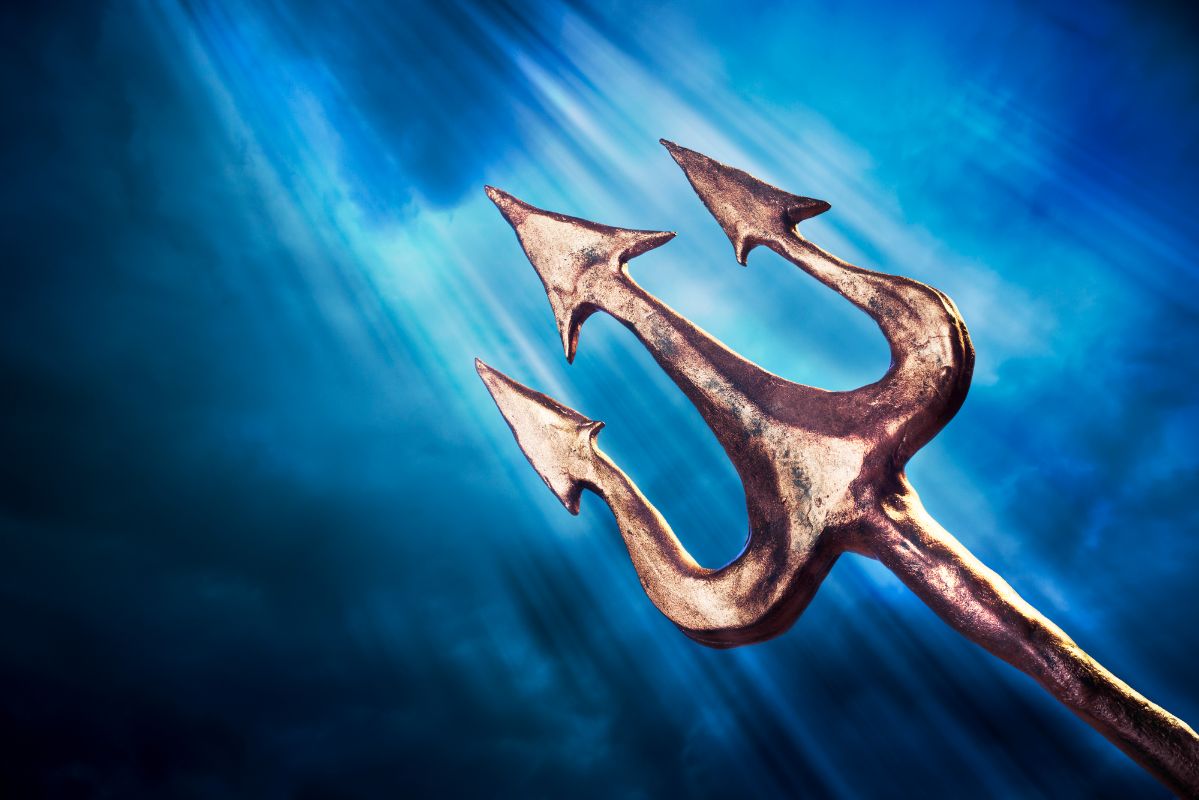 The Legendary Trident of Poseidon

Although a mighty god, Poseidon still was inferior to his brother, the king of the gods, Zeus. To stand in the shadow of someone close to you is a very commonplace phenomenon that happens in our society. Whether if it’s your brother or a good friend of yours. Many individuals can’t help themselves to give in to the nasty emotion, jealousy. In some myths, it’s very clear that Poseidon was jealous of the power and authority of Zeus. Now, Poseidon being a god couldn’t even escape or ascend the feelings of jealousy. So for us mortals, how could one convince oneself not to surrender to jealousy. What is it that is required of us, to ascend this silly and sometimes destructive emotion?

I begin to sing about Poseidon, the great god, mover of the earth and fruitless sea, god of the deep who is also lord of Helicon and wide Aegean sea. O Shaker of the Earth, to be a tamer of horses and a saviour of ships! Hail Poseidon Holder of the Earth, dark-haired lord! O blessed one, be kindly in heart and help those who voyage in ships!
Homer, in the Homeric Hymns

When Demeter was wandering in search of her daughter, she was followed, it is said, by Poseidon, who lusted after her. So she turned, the story runs, into a mare, and grazed with the mares of Ogkios [in Arkadia]; realising that he was outwitted, Poseidon changed into a stallion and enjoyed Demeter. At first, they say, Demeter was angry at what had happened, but later on she laid aside her wrath and wished to bathe in the Ladon . . . Demeter, they say, had by Poseidon a daughter, whose name they are not wont to divulge to the uninitiated, and a horse called Areion.
Pausanias, in the Description of Greece