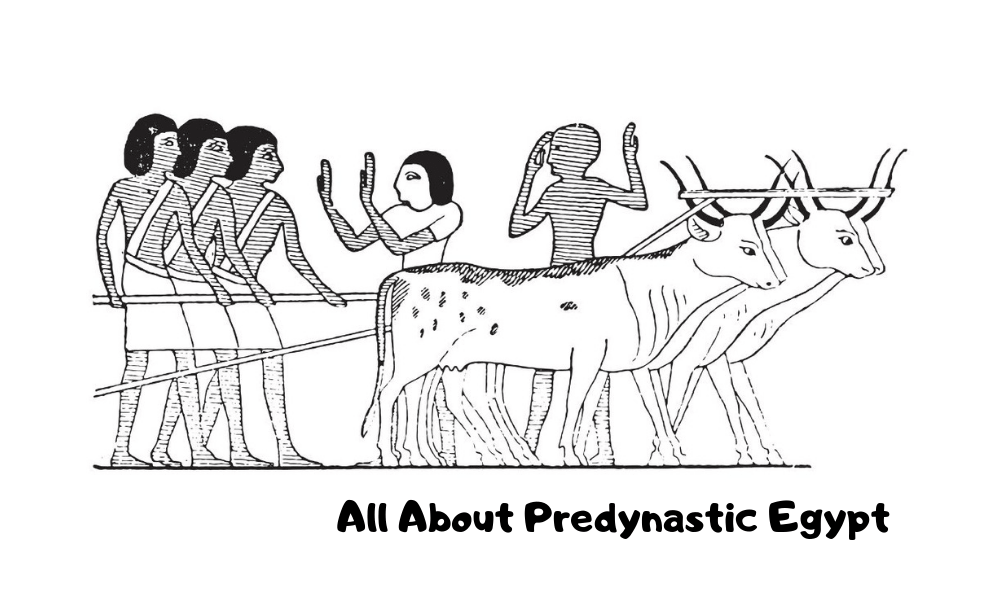 All great things have humble beginnings. Whether its a first step that marks the start of a long adventurous journey or if its the first stone block that sets the foundation for a great pyramid.

Ancient Egypt was a remarkably long-lasting civilization which underwent many different periods over a span of 3000-4000 years, depending on where you decide to put the starting point. In this article we’ve collected some information and facts concerning the history of predynastic and prehistoric Egypt.

Historical map of Ancient Egypt with most important sites, with rivers and lakes. – CC 4.0 Wikimedia

Historians and egyptologists generally divide predynastic Egypt into different cultural periods named after the type of settlement and location of the archeological sites. The most well-known cultures, in chronological order, of Predynastic Egypt are the Merimde, El Omari and Maadi of Lower Egypt and the Tasian, Badarian, Naqada, Amratian, Gerzean of Upper Egypt.

These individual “cultures” should not be interpreted as separate entities in reality, they are but posterior divisions made by historians to get a better understanding of the period. As for example the Badarian culture which succeeded the Tasian culture were so similar that many scholars consider them one continuous period.

During this same time the Sahara keeps getting drier which most likely forced human settlements to gradually move closer to the Nile. By the early dynastic period, the terrain of the sahara is close to what we have today, namely a huge arid desert.

Moreover it is in Upper Egypt where we’ve found the majority of the artefacts, archeological finds and remnants of predynastic Egypt. This is because the Delta region and sites of Lower Egypt has been buried under heavy depositions of silt amassed from the Nile River.

There is little archeological findings from the period of 9000 to 6000 BCE. It is around 6000 BCE that these above mentioned neolithic cultures and settlements appear dispersed along the Nile river ranging from Upper to Lower Egypt.

The most common types of burials were shallow pits dug into the desert sand. Moreover the bodies were most often covered with linen, skins, reed mats or with stone slabs. The bodies were also placed facing the west and around him/her were placed the many things that he/she might need in the afterlife, most common being pottery for food purposes.

Before Egypt was united into a single country, Egypt was divided into two main parts, Upper and Lower Egypt. Though the term dynasty 0 has become established when discussing the kings of the predynastic period, it should be noted that the reign and actual existence of these kings is less certain than later dynasties.

Some of these names/individuals may have been contemporaries, while some may never have existed at all.

Royal cemetery of Abydos, where the tombs of many of the kings of the 0-2 dynasties are found.

It is quite difficult to define exactly where and when predynastic Egypt begins and where it ends. While some phenomena and tendencies that are later found in the Old Kingdom and subsequent dynastic periods can be traced to Egyptian prehistory and predynasty, it isn’t always that easy. There are many scholars, egyptologists and theories that differ on what happened, when and how. It is however quite clear that the foundation of the rich civilization and culture of dynastic Egypt lies on many of these findings in prehistoric Upper and Lower Egypt.