Morality and Virtue in The Prince by Machiavelli 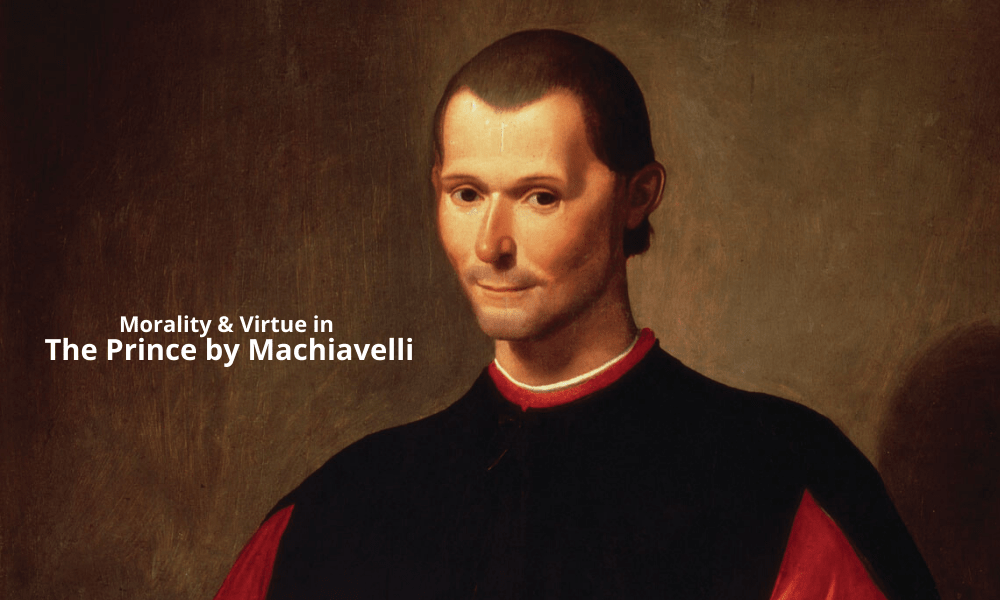 What is good and is it always wise to choose virtue over vice? What if choosing to do good led to your demise, would you still do good or would you consider being cunning and maybe appear to be whatever is needed in that situation which leads to your well-being.

In this article I will discuss concepts such as morality and virtue in Niccolò Machiavelli’s influential masterpiece The Prince, while making a brief comparison with preceding or ancient conceptions of virtue, I will also briefly describe Machiavelli’s view of the ideal prince.

Machiavelli’s worldview in state affairs and human psychology as portrayed in The Prince is fascinating to say the least and has been widely studied and discussed for centuries. At first glance many of his thoughts may seem inhumane and straight up morally unsound, as he gives several examples of how a prince should be and act which more or less is incompatible with the common sense and ethics of an normal person.

Which individual would prioritize fear over love, cruelty over mercy, evil over being good or war over peace when it comes to ruling a nation. No reasonable person would be the obvious answer, but that wasn’t so obvious for Machiavelli, as he seemed to be a fellow that had his mind not only intact but also highly sharpened. Some things which are considered to be obvious to ordinary people, he manages to turn those arguments in and out and then counteract with a scenario that challenges those conceptions. An example where this is clarified is when he says:

And the manner in which we live, and that in which we ought to live, are things so wide asunder, that he who quits the one to betake himself to the other is more likely to destroy than to save himself; since any one who would act up to a perfect standard of goodness in everything, must be ruined among so many who are not good. It is essential, therefore, for a Prince who desires to maintain his position, to have learned how to be other than good, and to use or not to use his goodness as necessity requires.
chapter XV

This world that Machiavelli describes is a world of ever-changing relations of power. Mastery over matters of warfare, will, courage and, most importantly, appearances is essential to maintain their place on the throne. It is impossible to overlook the ruthless realism that permeates the entire text, it is about power and how to keep it at all costs. It is not a shocking fact that Machiavelli emphasizes the external and not the internal so to say, as to appear good can be more important than actually being it or being cruel can be more effective than showing mercy. After all, the prince deals with state governance and politics, something that hasn’t been considered to be the most honest profession for some time now.

What is most fascinating about the Prince is how it manages to speak to both the prince and the common man. After all, it is dedicated to an extremely specific individual in a unique position of power, but at the same time the text manages to be universally valid. What makes it so universal you might ask? Could it be Machiavelli’s comprehensive insights into human psychology or is it the ruthless realism that is so appealing? It is probably a mixture of both, although Machiavelli has a pessimistic view of human nature, his ideas contain certain understandings and insights that cannot be so readily dismissed and condemned as immoral. This is most likely why the book has been so influential as it seems to be so universal. People who read the book recognize many aspects of humans and the dark side of humanity that Machiavelli describes. His arguments are reinforced by a realism as he was indeed an influential figure during his time in 15-16th century Italy, even though he was exiled and lost his position in the state, he provides us with an image of how life could have looked like at the top of the social hierarchy.

Machiavelli’s view of virtue is characterized by a type of utilitarianism. Virtue in itself is not the goal but rather a means of preserving power in the state. He gives numerous examples of how goodness or virtue can result in one’s decline. What people consider to be good is unpredictable, questionable and thus unreliable.

It is the results that lead to the self-preservation of you and the power that you hold that are important to Machiavelli, and that is precisely why appearances is so crucial in his political philosophy. He wants you to be cunning as a fox so virtues are viewed as something you use to accomplish something else and not something you own for its own sake.

Machiavelli’s conception of virtue seem to fall into direct contrast to how many ancient philosophers viewed virtue. The Greek general concept of virtue “areté“, which can be said to be a mixture of the concepts of virtue and competence/skill/mastery, was something that many of the ancient philosophers considered to be the most excellent man could aspire to, especially the Stoics. They could even go so far as to say that nothing but the virtuous is good, not even health or wealth. They would be completely horrified by Machiavelli’s political philosophy if they had the chance to read it.

Machiavelli’s world was a chaotic and whimsical world characterized by intrigue and strategy. For him, it was always the end result that was important, and how you arrived at the desired result was considered secondary. It is precisely this attitude that makes Machiavelli a little difficult to digest but which nevertheless gives him the distinctive taste which is so typically “Machiavellian” if you will. Most people who read the book will probably be most surprised to see themselves agreeing with some or even many of the things that this crazy man uttered. That was definitely the case with me, even if you were able to reject much of what he said, I’m sure that some persistent Machiavellian insights could still penetrate.