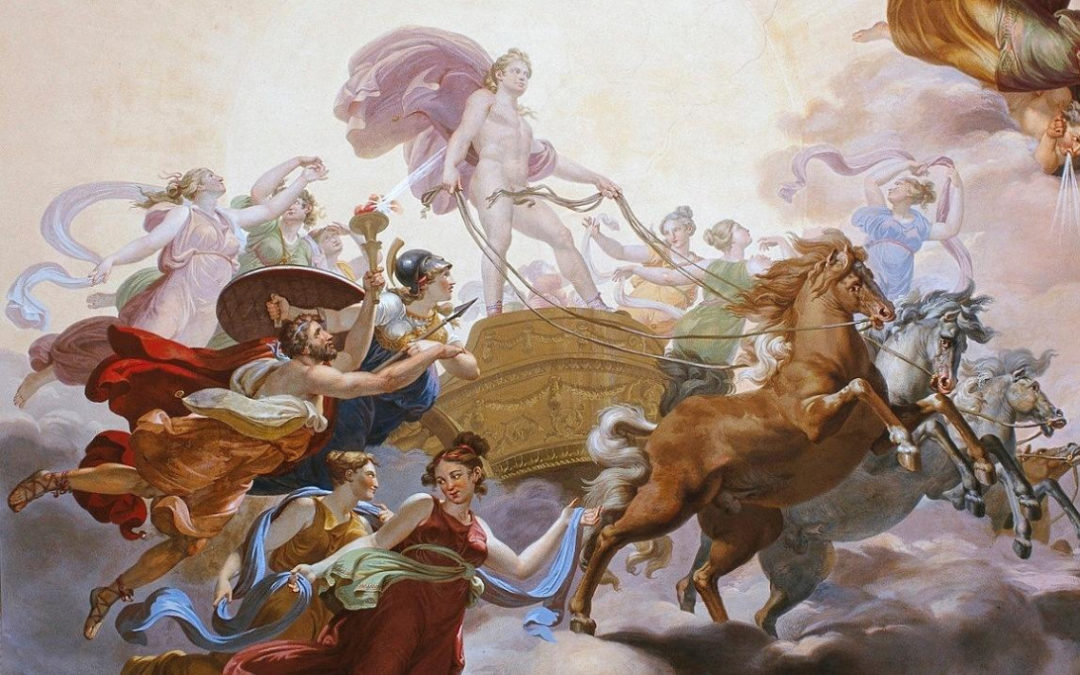 Once, long ago, the gods and the humans convened at the city of Mecone to decide on the gifts and sacrifices that humans would be obliged to provide for the gods in response to their many blessings. Prometheus, the creator of humans according to some myths, and whose name literally means forethought, came forth to represent humanity. He tried to deceive and outwit Zeus by slaughtering a sacrificial animal, a large ox, and by cutting it into pieces. He put the pieces in two piles, so that in one of the piles he placed the meat, i.e. the edible parts and covered them with the skin of the sacrificed ox and placed the stomach, which was the worst part of the animal, on top of it to make it look undesirable, while the other pile consisted of bones alone, but were covered with layers of shiny fat to make it look more desirable. Prometheus then invited Zeus to choose between the two piles, hoping that he would choose the more attractive one, he said:

Zeus, most glorious and greatest of the eternal gods, take whichever of these portions your heart within you bids.
Hesiod in the Theogony

But Zeus being the wise god that he was instantly saw through this deception, and in a controlled anger he decided to pick the lesser pile in order to have a good reason to punish the humans. As punishment for the deception by Prometheus, he deprived humans from fire, which left them cold and shivering in the night. But Prometheus knew that life would be tough and challenging for humans without fire, so he decided to steal fire from the gods and return it back to the humans. This angered Zeus even further which made him punish Prometheus instead this time around, so he had Prometheus chained to a rock somewhere on the Caucasus Mountains. Upon this rock a eagle would arrive daily to peck at his body in order to consume his liver, which was then renewed each passing day. 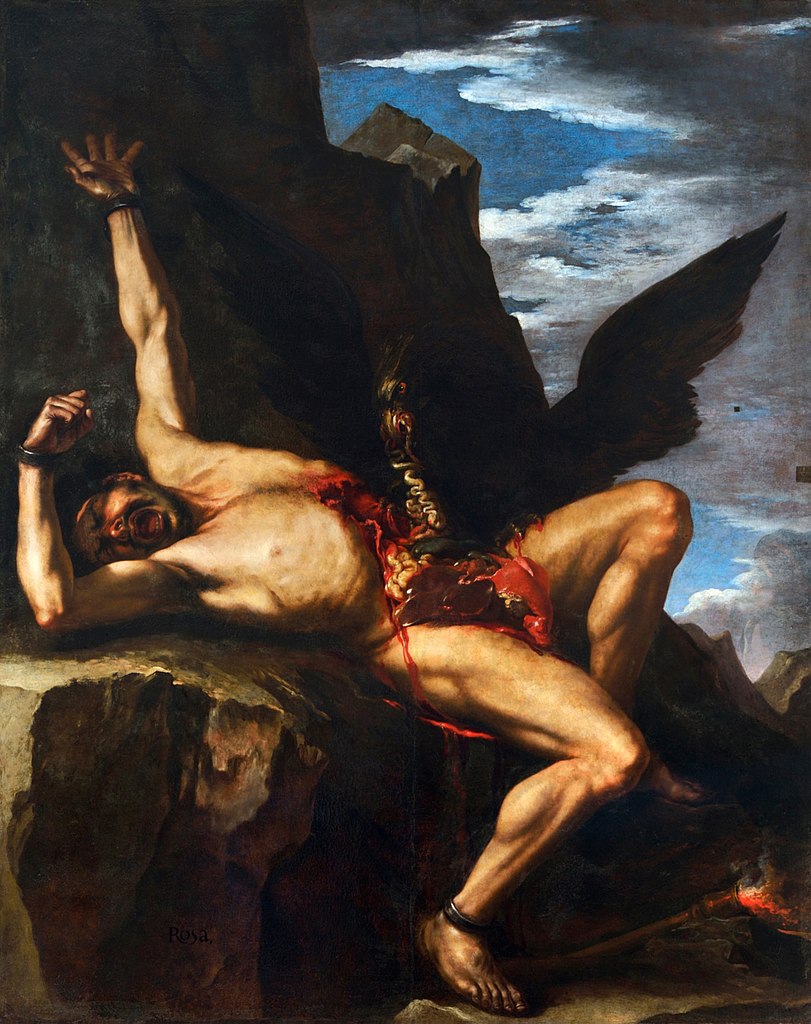 Prometheus being tortured by an eagle by Salvator Rosa

Prometheus suffered for the longest time until he was finally saved by the hero Heracles, who arrived and slew the eagle with his bow and arrow.

‘Zeus, most glorious and greatest of the eternal gods, take which ever of these portions your heart within you bids.’ So he said, thinking trickery. But Zeus, whose wisdom is everlasting, saw and failed not to perceive the trick, and in his heart he thought mischief against mortal men which also was to be fulfilled. With both hands he took up the white fat and was angry at heart, and wrath came to his spirit when he saw the white ox-bones craftily tricked out: and because of this the tribes of men upon earth burn white bones to the deathless gods upon fragrant altars. But Zeus who drives the clouds was greatly vexed and said to him:

`Son of Iapetus, clever above all! So, sir, you have not yet forgotten your cunning arts!’
Hesiod in the Theogony

So spake Zeus in anger, whose wisdom is everlasting; and from that time he was always mindful of the trick, and would not give the power of unwearying fire to the Melian race of mortal men who live on the earth. But the noble son of Iapetus outwitted him and stole the far-seen gleam of unwearying fire in a hollow fennel stalk. And Zeus who thunders on high was stung in spirit, and his dear heart was angered when he saw amongst men the far-seen ray of fire.
Hesiod in the Theogony

I must bear
What is ordained with patience, being aware
Necessity doth front the universe
With an invincible gesture.
Aeschylus in Prometheus Bound