The Tragic Love Story of Pyramus and Thisbe 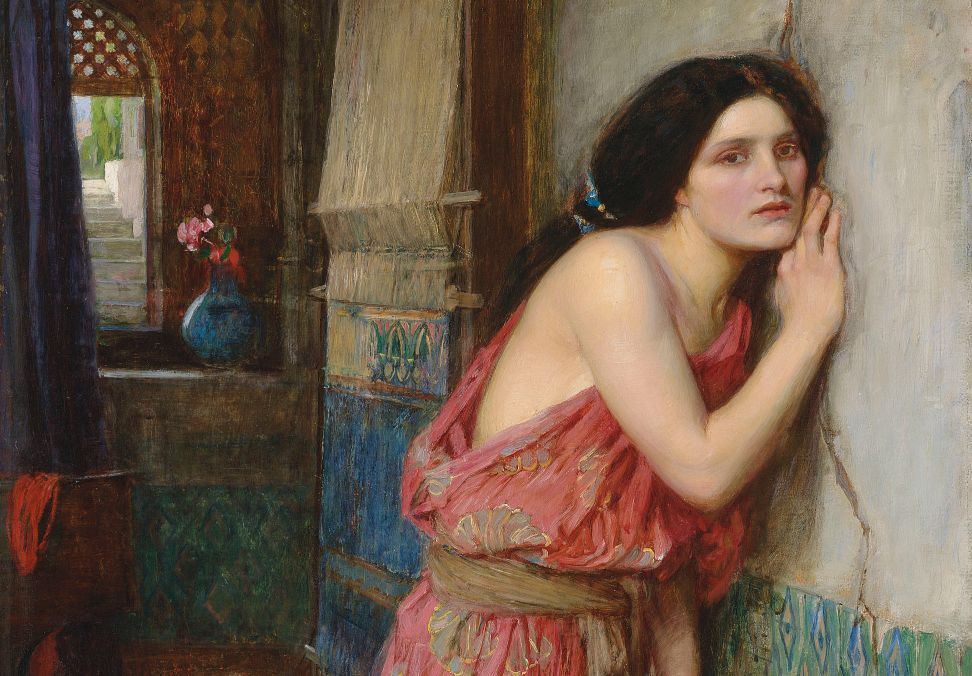 In the city of Babylon, far to the east, Pyramus and Thisbe lived in two neighbouring houses, which bumped against each other.

Pyramus was the most beautiful young man in the city and Thisbe the most sought after girl. They loved each other with the innermost love, but their fathers opposed their marriage. However, through a crack in the wall connecting their houses, they were able to communicate with each other, exchanging many words of love. One day, they decided to meet outside the city walls near the tomb of King Ninos, where the tall mulberry tree stood with its twisting white fruits. When evening came, Thisbe slowly and unnoticedly sneaked out of her father’s house and hurried while covering her head to the agreed place. She had barely arrived until she came upon a lioness, fresh from the kill with jaws bloody, that came to quench its thirst in the nearby spring. It was under the moonlight that Thisbe saw the terrible beast and fled anxiously into a mountain cave. But in her hurry she dropped her veil to the ground. When the lioness came to the scene, she tore the veil with her paws and her jaws, bloody with cattle, which she had just devoured.

Soon thereafter, Pyramus arrived. He immediately saw the tracks of the beast in the sand and was very frightened. Immediately upon discovering the torn, blood-stained veil, he was consumed by the deepest despair and accused himself of being guilty of the death of his beloved:

Two lovers will be lost in one night. She was the more deserving of a long life. I am the guilty spirit. I have killed you, poor girl, who told you to come by night to this place filled with danger, and did not reach it first. O, all you lions, that live amongst these rocks, tear my body to pieces, and devour my sinful flesh in your fierce jaws! Though it is cowardly to ask for death.

Pyramus covered the veil with tears and kisses, and finally took his sword and drilled it into his chest. His red blood sprouted on the branches of the mulberry, and it’s white fruits turned dark.

After a while, Thisbe returned from her hiding place, once she had seen the lioness depart. She looked for her beloved. She was confounded when she saw from a long distance that the fruits of the tree had changed color, so she advanced her way towards the tree. There she saw a too terrible sight for any living eyes to see: her beloved lay dying on the ground and just within a few moments exhaled his last sigh. When Thisbe saw the bloody veil, she understood how this tragedy came to pass. She decided to die at her beloved’s side. She took Pyramus’ sword and thrust it into her own chest. So then the two won in death, what was denied to them in life. They were united, and their ashes were allowed to rest in the same urn.

And this is why since then, the mulberry fruit darkens as soon as it had ripened.

‘Pyramus and Thisbe, he the loveliest youth, and she the most sought after girl, the East held, lived in neighbouring houses, in the towering city of Babylon, that Semiramis is said to have enclosed with walls of brick. Their nearness and their first childhood steps made them acquainted and in time love appeared. They would have agreed to swear the marriage oath as well, but their parents prevented it. They were both on fire, with hearts equally captivated, something no parent can prevent. They had no one to confide all this to: nods and signs were their speech, and the more they kept the fire hidden, the more it burned.

There was a fissure, a thin split, in the shared wall between their houses, which traced back to when it was built. No one had discovered the flaw in all those years – but what can love not detect? – You lovers saw it first, and made it a path for your voices. Your endearments passed that way, in safety, in the gentlest of murmurs. Often, when they were in place, Thisbe here, and Pyramus there, and they had each caught the sound of the other’s breath, they said ‘Unfriendly wall, why do you hinder lovers? How hard would it be for you to let our whole bodies meet, or if that is too much perhaps, to open to the kisses we give each other? Not that we are not grateful. We confess that we owe it to you that words are allowed to pass to loving ears’ So they talked, hopelessly, sitting opposite, saying, as night fell, ‘Farewell’, each touching the wall with kisses that could not reach the other side.

One morning when Aurora had quenched the fires of night, and the sun’s rays had thawed the frosty grass, they came to their usual places. Then they decided, first with a little murmur of their great sorrows, to try, in the silence of night, to deceive the guards, and vanish outside. Once out of the house they would leave the city as well, and they agreed, in case they went astray crossing the open country, to meet by the grave of Ninus, and hide in the shelter of a tree. There was a tall mulberry tree there, dense with white berries, bordering a cool fountain. They were satisfied with their plan, and the light, slow to lose its strength, was drowned in the waters, and out of the same waters the night emerged.’‘Carefully opening the door, Thisbe, slipped out, deceiving her people, and came to the tomb, her face veiled, and seated herself under the tree they had agreed on. Love made her brave. But a lioness fresh from the kill, her jaws foaming, smeared with the blood of cattle, came to slake her thirst at the nearby spring. In the moonlight, Babylonian Thisbe sees her some way off, and flees in fear to a dark cave, and as she flees, she leaves behind her fallen veil. When the fierce lioness has drunk deeply, returning towards the trees, she chances to find the flimsy fabric, without its owner, and rips it in her bloodstained jaws. Leaving the city a little later, Pyramus sees the creature’s tracks in the thick dust, and his face is drained of colour. When he also discovers the veil stained with blood, he cries, “Two lovers will be lost in one night. She was the more deserving of a long life. I am the guilty spirit. I have killed you, poor girl, who told you to come by night to this place filled with danger, and did not reach it first. O, all you lions, that live amongst these rocks, tear my body to pieces, and devour my sinful flesh in your fierce jaws! Though it is cowardly to ask for death”

He picks up Thisbe’s veil, and carries it with him to the shadow of the tree they had chosen. Kissing the token, and wetting it with tears, he cries, “Now, be soaked in my blood too.” Having spoken he drove the sword he had been wearing into his side, and, dying, pulled it, warm, from the wound. As he lay back again on the ground, the blood spurted out, like a pipe fracturing at a weak spot in the lead, and sending long bursts of water hissing through the split, cutting through the air, beat by beat. Sprinkled with blood, the tree’s fruit turned a deep blackish-red, and the roots, soaked through, also imbued the same overhanging mulberries with the dark purplish colour.’

‘Now Thisbe returns, not yet free of fear, lest she disappoint her lover, and she calls for him with her eyes and in her mind, eager to tell him about the great danger she has escaped. Though she recognises the place and the shape of the familiar tree, the colour of the berries puzzles her. She waits there: perhaps this is it. Hesitating, she sees quivering limbs writhing on the bloodstained earth, and starts back, terrified, like the sea, that trembles when the slightest breeze touches its surface, her face showing whiter than boxwood. But when, staying a moment longer, she recognises her lover, she cries out loud with grief, striking at her innocent arms, and tearing at her hair. Cradling the beloved body, she bathes his wounds with tears, mingling their drops with blood. Planting kisses on his cold face, she cries out ‘Pyramus, what misfortune has robbed me of you? Pyramus, answer me! Your dearest Thisbe calls to you: obey me, lift your fallen head!’ At Thisbe’s name, Pyramus raised his eyes, darkening with death, and having looked at her, buried them again in darkness.’

‘When she recognised her veil and saw the ivory scabbard without its sword, she said, “Unhappy boy, your own hand, and your love, have destroyed you! I too have a firm enough hand for once, and I, too, love. It will give me strength in my misfortune. I will follow you to destruction, and they will say I was a most pitiful friend and companion to you. He, who could only be removed from me by death, death cannot remove. Nevertheless I ask this for both of us, in uttering these words, O our poor parents, mine and his, do not deny us the right to be laid in one tomb, we whom certain love, and the strangest hour have joined. And you, the tree, that now covers the one poor body with your branches, and soon will cover two, retain the emblems of our death, and always carry your fruit darkened in mourning, a remembrance of the blood of us both.”

Saying this, and placing the point under her heart, she fell forward onto the blade, still warm with his blood. Then her prayer moved the gods, and stirred her parents’ feelings, for the colour of the berry is blackish-red, when fully ripened, and what was left from the funeral pyres rests in a single urn.’
Ovid in the Metamorphoses bk. IV