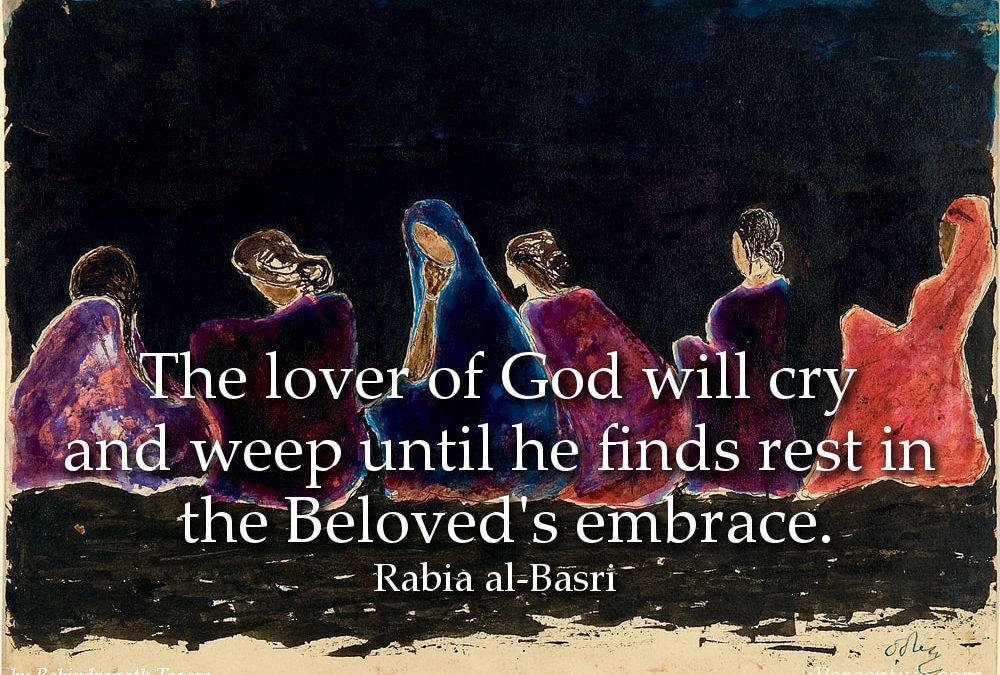 Rabia al-Basri (713 – 801) was a Sufi mystic saint, who’s widely recognized as being the most influential and notable female Sufi mystic in Islamic history. She did not leave any written work of her own, as most of the sources of the quotes and stories attributed to her are unknown.

My Beloved is always with me.
Rabia al-Basri (My Beloved – Poem)

I would not worship Him unless I saw Him.
Rabia al-Basri (When asked if she could see the one (God) that she’s worshipping) 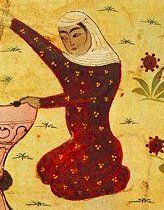 The will of our beloved, should also be our own will.
Rabia al-Basri

No separation exists between the Beloved and the lover.
Rabia al-Basri

When he or she is as grateful for adversity as for bounty.
Rabia al-Basri (When asked when a slave can be content with his/her life)

May God deprive you of all that which deprives you from God.
Rabia al-Basri

This is a disease no doctor can cure, only Union with the Friend can cure it.
Rabia al-Basri

The lover of God will cry and weep until he finds rest in the Beloved’s embrace.
Rabia al-Basri

O Allah! Keep me engrossed in You and do not allow the people of the world to divert me.
Rabia al-Basri

Death is a bridge between friends. The time now nears that I cross that bridge, and friend meets Friend.
Rabia al-Basri

My love for God has so possessed me that no place remains for loving or hating any save Him.
Rabia al-Basri (When asked if she hated Satan)

Since I have recognized Allah, I have renounced the world. I am not aware of its source–whether halal or haram
Rabia al-Basri

The best thing for a servant who desires to be near his Lord, is to possess nothing in this world or the next save Him.
Rabia al-Basri

Seclusion is the soul’s ideal preparation for reaching God. It is in the state of solitude that the soul contemplates on the attributes of God.
Rabia al-Basri

Oh Lord: The Stars are shining and the eyes of man are closed and kings have shut their doors and every lover is alone with his beloved and here am I alone with Thee.
Rabia al-Basri

O Allah! I am forlorn, without mother and father. Now my hand too is broken. But I do not mind these things if Thou be pleased with me. But make it manifest to me that you are pleased with me.
Rabia al-Basri

O my Lord, Thous knowest that the desire of my heart is to obey Thee, and that the light of my eye is in the service of Thy court. If the matter rested with me, I should not cease for one hour from Thy service, but Thou hast made me subject to a creature
Rabia al-Basri

Rabia was once asked, “How did you attain that which you have attained?”
“By often praying, ‘I take refuge in You, O God, from everything that distracts me from You, and from every obstacle that prevents me from reaching You.’
Rabia al-Basri

One day, Rabia was seen running, carrying fire in one hand and water in the other. They asked her the meaning of her action and where she was going. She replied, I am going to light a fire in Paradise and pour water on Hell, so that both veils (hindrances to the true vision of God) completely disappear.”
Rabia al-Basri 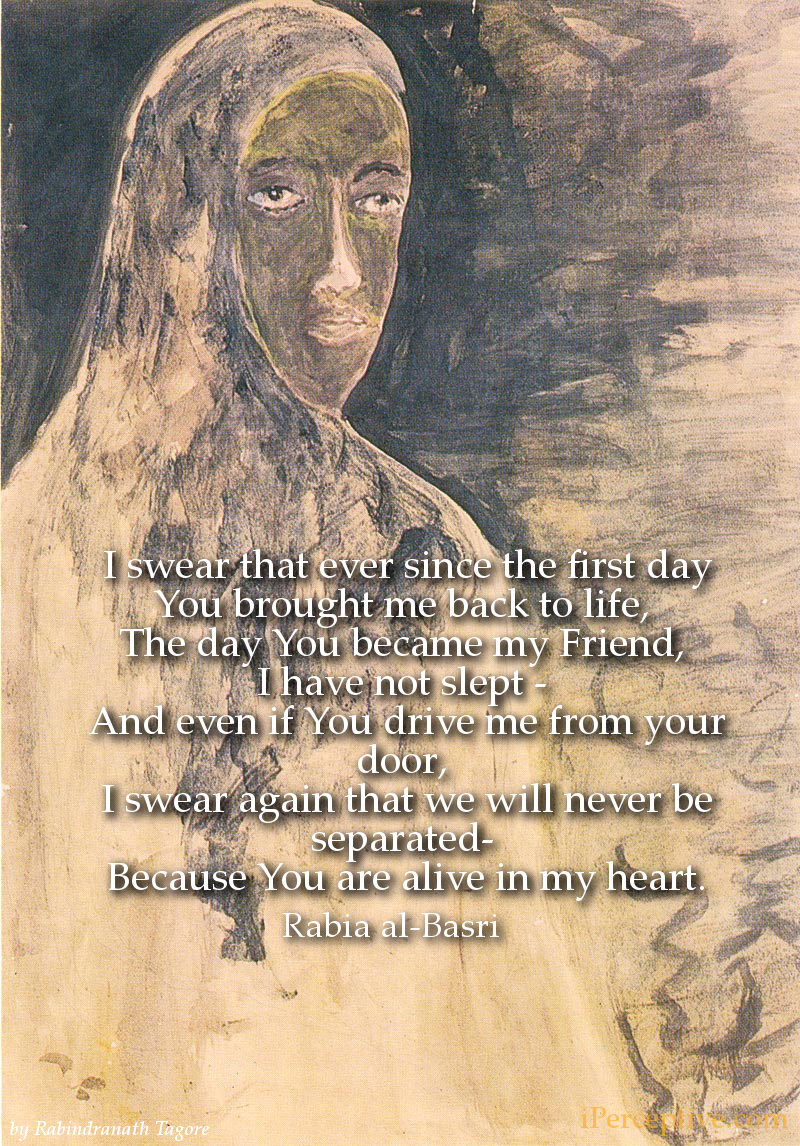 I swear that ever since the first day You brought me back to life,
The day You became my Friend,
I have not slept –
And even if You drive me from your door,
I swear again that we will never be separated-
Because You are alive in my heart.
Rabia al-Basri

Ironic, but one of the most intimate acts
of our body is
death.
So beautiful appeared my death – knowing who then I would kiss,
I died a thousand times before I died.
“Die before you die,” said the Prophet
Muhammad.
Have wings that feared ever
touched the Sun?
I was born when all I once
feared – I could
love.
Rabia al-Basri

In love, nothing exists between heart and heart.
Speech is born out of longing,
True description from the real taste.
The one who tastes, knows;
the one who explains, lies.
How can you describe the true form of Something
In whose presence you are blotted out?
And in whose being you still exist?
And who lives as a sign for your journey?
Rabia al-Basri

I have loved Thee with two loves –
a selfish love and a love that is worthy of Thee.
As for the love which is selfish,
Therein I occupy myself with Thee,
to the exclusion of all others.
But in the love which is worthy of Thee,
Thou dost raise the veil that I may see Thee.
Yet is the praise not mine in this or that,
But the praise is to Thee in both that and this.
Rabia al-Basri

O children of Adam! Your eyes provide no passage to perceive the Truth, nor is there any access to Him by speech of the tongue. The faculty of hearing is but a highway to distress for the speaker, while your hands and feet only steer you only into bewilderment. The true work is in the heart. Try to acquire an awakened heart, for when the heart is awakened, it will have no need of a friend. That is to say, an awakened heart is one which is lost in God. What need does one who is effaced and lost in God have of a friend; for this is the station of Annihilation in God.
Rabia al-Basri

Eyes are at rest, the stars are setting.
Hushed are the stirrings of birds in their nests,
Of monsters in the ocean.
You are the Just who knows no change,
The Balance that can never swerve,
The Eternal which never passes away.
The doors of Kings are bolted now and guarded by soldiers.
Your Door is open to all who call upon You.
Each love is now alone with his beloved.
And I am alone with You.
Rabia al-Basri

Your hope in my heart is the rarest treasure
Your Name on my tongue is the sweetest word
My choicest hours
Are the hours I spend with You –
O Allah, I can’t live in this world
Without remembering You–
How can I endure the next world
Without seeing Your face?
I am a stranger in Your country
And lonely among Your worshippers:
This is the substance of my complain.
Rabia al-Basri (My Greatest Need)

With my Beloved I alone have been,
When secrets tenderer than evening airs
Passed, and the Vision blest
Was granted to my prayers,
That crowned me, else obscure, with endless fame;
The while amazed between
His Beauty and His Majesty
I stood in silent ecstasy
Revealing that which o’er my spirit went and came.
Lo, in His face commingled
Is every charm and grace;
The whole of Beauty singled
Into a perfect face
Beholding Him would cry,
‘There is no God but He, and He is the most High.’
Rabia al-Basri

My peace, O my brothers and sisters, is my solitude,
And my Beloved is with me always,
For His love I can find no substitute,
And His love is the test for me among mortal beings,
Whenever His Beauty I may contemplate,
He is my “mihrab”, towards Him is my “qiblah”
If I die of love, before completing satisfaction,
Alas, for my anxiety in the world, alas for my distress,
O Healer (of souls) the heart feeds upon its desire,
The striving after union with Thee has healed my soul,
O my Joy and my Life abidingly,
You were the source of my life and from Thee also came my ecstasy.
I have separated myself from all created beings,
My hope is for union with Thee, for that is the goal of my desire
Rabia al-Basri (My Beloved – Poem)