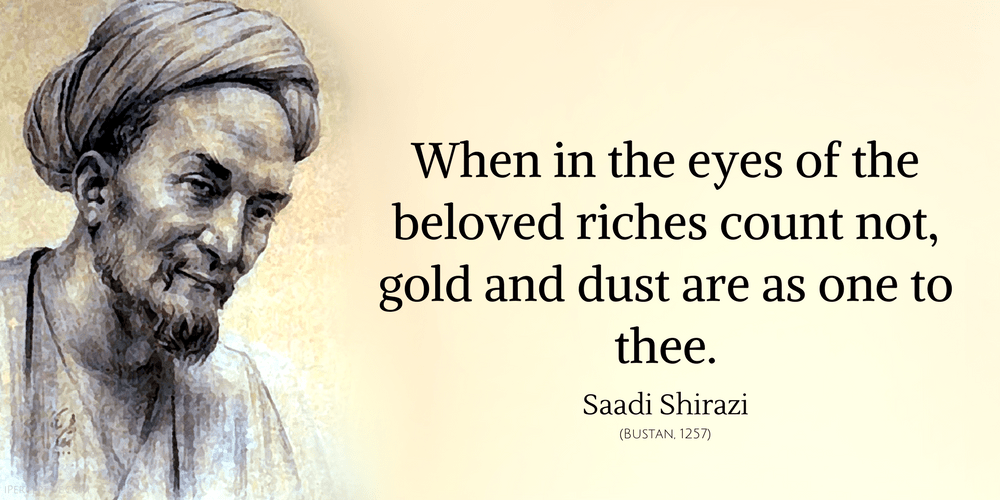 Saadi Shirazi was a highly influential Persian poet and writer who lived in the 13th century. He is best known today for his works ‘Gulistan’, ‘Bustan’ and for his extensive love poetry (ghazals). Together with Rumi and Hafez, he is considered one of the three greatest ghazal-writers of Persian poetry.

Saadi, which was the pen name of Abū-Muhammad Muslih al-Dīn bin Abdallāh Shīrāzī, was a well-traveled man, though most likely not of his own volition but initially due to the Mongol invasions of his homeland of Fars around the year 1225. When one reads the works and poems of Saadi, one is struck by the sensitivity and profundity in his words and meaning. Each word of his poems seem to have been carefully picked and synthesized to a greater vehicle of expression, like the absurdity of the human experience and prospect of union with the divine.

Saadi visited many different parts of Anatolia and Asia during his travels, from Egypt to India. Having travelled for thirty years or so, he made many friends and a couple of enemies along the way. He intimately learnt about the struggles of men and women trying to recover och cope with the calamity brought upon them by the Mongols.

The works of Saadi has been quite influential in the western world as well, influential early modern thinkers like Voltaire, Hegel, Goethe, Pushkin and Benjamin Franklin were all aware of his works and poems.

In this article, as a seeker and lover myself, I’ve decided to honour Sa’di and his contribution to all the free spirits drawing breath around the world.

A wise man will not utter every word which occurs to him.
Saadi Shirazi (Gulistan – Chapter 4, 1258)

Whatever is procured in haste goes easily to waste.
Saadi Shirazi (Gulistan, 1258)

Speech is a perfection in the soul of man But do not ruin thyself by speaking.
Saadi Shirazi (Gulistan, 1258)

Lovers are killed by those they love so well; No voices from the slain return.
Saadi Shirazi (If One His Praise of me Would Learn, 13th Century)

When in the eyes of the beloved riches count not, gold and dust are as one to thee.
Saadi Shirazi (Bustan, 1257)

Alone is my heart, there dwelleth affection for my beloved, thus, it contains no room for malice.
Saadi Shirazi (Bustan, 1257)

Use a sweet tongue, courtesy, and gentleness, and thou mayest manage to guide an elephant with a hair.
Saadi Shirazi (Gulistan, 1258) 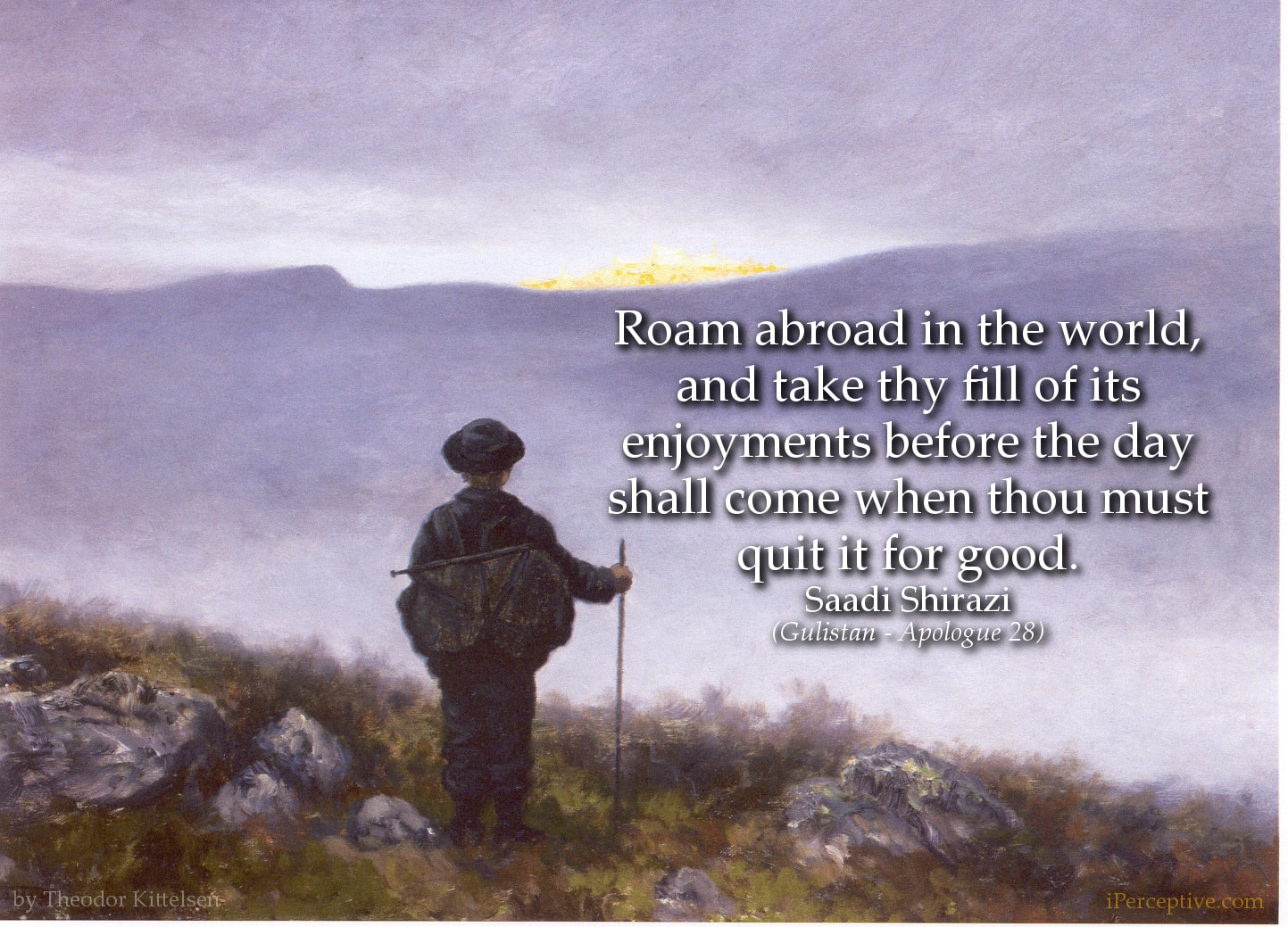 Roam abroad in the world, and take thy fill of its enjoyments before the day shall come when thou must quit it for good.
Saadi Shirazi (Gulistan – Apologue 28)

Happy are the days of them that are infatuated by love for him, whether they be sorrowed by separation from Him or made joyous by His presence.
Saadi Shirazi (Bustan, 1257)

While a man says not a word
His fault and virtue are concealed.
Think not that every desert is empty.
Possibly it may contain a sleeping tiger.
Saadi Shirazi (Gulistan – Chapter 1, 1258)

Words have a head, O shrewd man, and a tail. Do not insert thy words between words of others. The possessor of deliberation, intelligence and shrewdness Does not say a word till he sees silence.
Saadi Shirazi (Gulistan – Chapter 4, 1258)

Young men are joyous and of handsome countenance
But inconstant in fidelity to anyone.
Expect not faithfulness from nightingales
Who sing every moment to another rose.
Saadi Shirazi (Gulistan – Chapter 6, 1258)

A woman who arises without satisfaction from a man
Will raise many a quarrel and contention.
An old man who is unable to rise from his place,
Except by the aid of a stick, how can his own stick rise?
Saadi Shirazi (Gulistan – Chapter 6, 1258)

Of what utility are the rich,
If they are clouds of August,
And do not rain upon any one;
Or the foundation of the sun,
And do not give light to anyone;
Saadi Shirazi (Gulistan, 1258)

The thirst of my heart cannot be quenched
By sipping limpid water even if I drink oceans of it.

Blessed is the man of happy destiny whose eye
Alights every morning on such a countenance.
One drunk of wine awakens at midnight,
One drunk of the cupbearer on the morn of resurrection.
Saadi Shirazi (Gulistan – Chapter 5, 1258)

The children of Adam are limbs of a whole
Having been created of one essence.
When the calamity of time afflicts one limb
The other limbs cannot remain at rest.
If you have no sympathy for the troubles of others
You are not worthy to be called by the name of “man”
Saadi Shirazi (Gulistan, 1258) 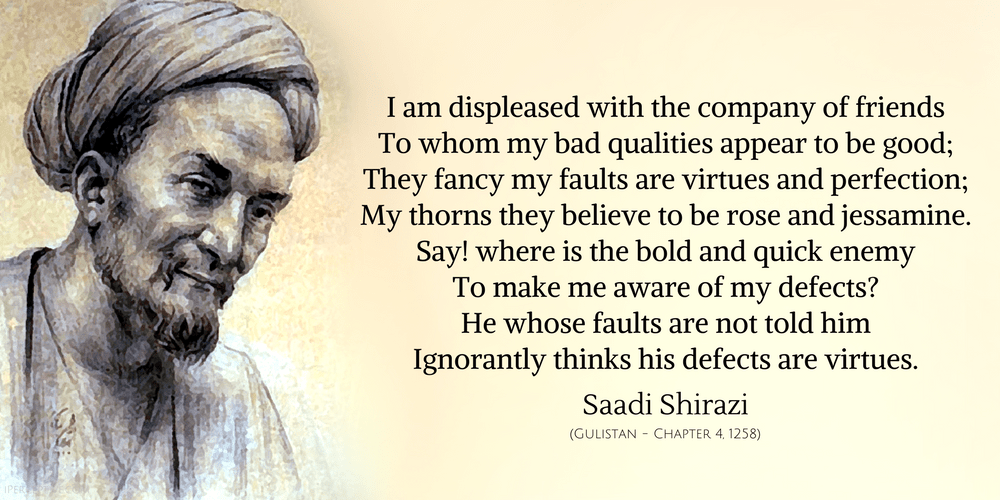 I am displeased with the company of friends
To whom my bad qualities appear to be good;
They fancy my faults are virtues and perfection;
My thorns they believe to be rose and jessamine.
Say! where is the bold and quick enemy
To make me aware of my defects?
He whose faults are not told him
Ignorantly thinks his defects are virtues.
Saadi Shirazi (Gulistan – Chapter 4, 1258)

One day, in the pride of youth, I had travelled hard and arrived perfectly exhausted in the evening at the foot of an acclivity. A weak old man, who had likewise been following the caravan, came and asked me why I was sleeping, this not being the place for it. I replied: ‘How am I to travel, having lost the use of my feet?’ He said: ‘Hast thou not heard that it is better to walk gently and to halt now and then than to run and to become exhausted?’ O thou who desirest to reach the station
Take my advice and learn patience.
An Arab horse gallops twice in a race.
A camel ambles gently night and day.
Saadi Shirazi (Gulistan – Chapter 6, 1258)

O darlings of your fathers, learn the trade because property and riches of the world are not to be relied upon; also silver and gold are an occasion of danger because either a thief may steal them at once or the owner spend them gradually; but a profession is a living fountain and permanent wealth; and although a professional man may lose riches, it does not matter because a profession is itself wealth and wherever you go you will enjoy respect and sit on high places, whereas those who have no trade will glean crumbs and see hardships.
Saadi Shirazi (Gulistan – Chapter 7, 1258)

A virtuous and beauteous youth
Was pledged to a chaste maiden.
I read that in the great sea
They fell into a vortex together.
When a sailor came to take his hand,
Lest he might die in that condition,
He said in anguish from the waves:
‘Leave me. Take the hand of my love.’
Whilst saying this, he despaired of life.
In his agony he was heard to exclaim:
‘Learn not the tale of love from the wretch
Who forgets his beloved in distress.’
Thus the lives of the lovers terminated.
Learn from what has occurred that thou mayest know
Because Sa’di is of the ways and means of love affairs
Well aware in the Arabian city of Baghdad.
Tie thy heart to the heart-charmer thou possessest
And shut thy eye to all the rest of the world.
If Mejnun and Laila were to come to life again
They might indite a tale of love on this occurrence.
Saadi Shirazi (Gulistan – Chapter 5, 1258)