The Myth of Semele, Zeus and the Birth of Dionysus 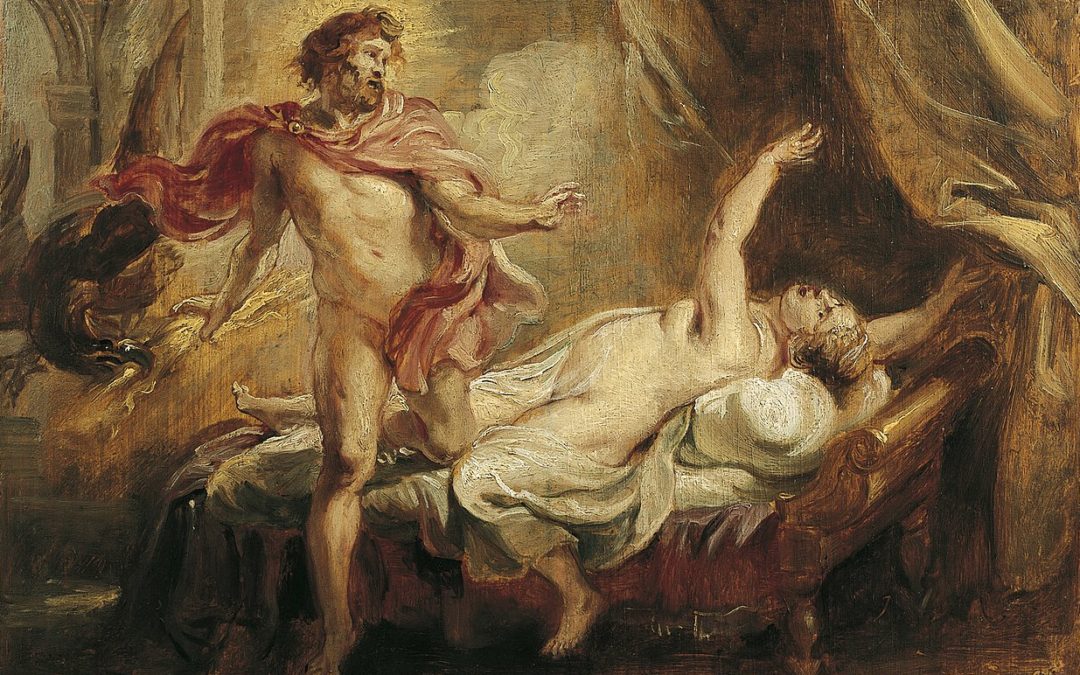 Semele, a mortal woman and daughter of the great Phoenician hero Cadmus who later became king of Thebes, had through her great beauty attracted the attention of the great sky-god Zeus himself. When Hera noticed that her husband was once again tempted by his carnal desires and was going to cheat on her, she decided to take action by inflicting her wrath on Semele. Hera swore an oath to herself that she would have her vengeance.

So Hera descended down from Olympus to the home of Semele. When she knocked on the door, Semele greeted and welcomed her into her home with joy and warmth, as she had magically transformed herself to Semele’s old wet-nurse Beroe. After talking for a while and familiarizing themselves with each other again, they ended up speaking about Semele’s relationship with Zeus, so she said:

‘I pray it may be Zeus,’ she sighed, ‘All these things frighten me. So often men, claiming to be gods, have gained the beds of simple girls. But even to be Zeus is not enough; he ought to prove his love, if he is Zeus. In all the power and glory that’s his when heavenly Hera welcomes him, beg him to don his godhead and take you in the same power and glory in his arms.[1]

Semele was enticed and misled by this cunning speech by Hera, so when Zeus later visited her, Semele pleaded and asked him to fullfill her deepest wish and her heart’s desire. Zeus promised her to do anything she wanted and swore an holy oath by the river Styx to seal her his promise, and it is known that a oath sworn by a God by the river Styx cannot be broken. So Semele, happy over Zeus’ generosity, while being ignorant of the impending doom to be inflicted upon her, said:

Give me yourself in the same grace as when your Hera holds you to her breast in love’s embrace.[2]

Hearing these words, Zeus was terribly regretful of his hasty promise to her, as he knew there was no turning back from this. So Zeus woefully soared to Olympus to summon and call upon the primal forces of thunder and lightning. Trying to lessen his power by choosing a lightning bolt of a lesser might, he returned back to Semele’s room. But her mortal frame was to weak and her fate was sealed in blazing fire as she could not endure the tumult of the heavens that reigned down upon her.

Semele, however, was six months pregnant with his child, and Zeus knew this. So before any harm came to the baby, he rescued it and sewed it inside his thigh, where it would complete it’s development. So after a couple months, the baby was born from its father’s thigh, the baby was none other than the god of wine himself, Dionysus. So Hermes, the messenger god and older son of Zeus, was given the task to carry him away to the nymphs that lived on the mountain Nysa, where the would feed him with milk and raise him safety.

Zeus fell in love with Semele and slept with her, promising her anything she wanted, and keeping it all from Hera. But Semele was deceived by Hera into asking her to come to her as he came to Hera during their courtship. So Zeus, unable to refuse her, arrived in her bridal chamber in a chariot with lightning flashes and thunder, and sent a thunderbolt at her. Semele died of fright, and Zeus grabbed from the fire her sixth-month aborted baby, which he sewed into his thigh. After Semele’s death the remaining daughters of Kadmos (Cadmus) circulated the story that she had slept with a mortal, thereafter accusing Zeus, and because of this had been killed by a thunderbolt.
Pseudo-Apollodorus in the Bibliotheca bk. 3. 26-27 (translated by Keith Aldrich)

“The myths relate that Dionysos brought up his mother Semele from Hades, and that, sharing with her his own immortality, he changed her name to Thyone.”
Diodorus Siculus in the Library of History 4. 25. 4 (translated Charles H. Oldfather)

And Semele, daughter of Kadmos (Cadmus) was joined with him in love [with Zeus] and bare him a splendid son, joyous Dionysos,–a mortal woman an immortal son. And now they both are gods.”
Hesiod in the Theogony (translated by Evelyn-White)