21 Spiritual Quotes On Death and Dying 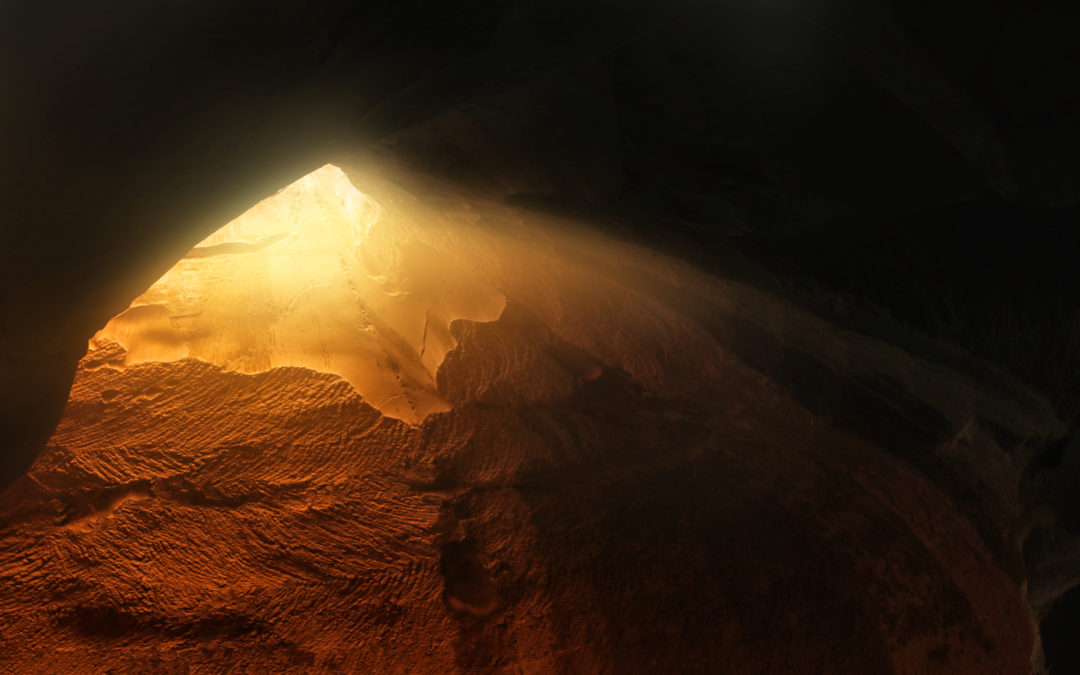 Our societies here in the western world have done a excellent job of distancing its citizens from the topic of death. Anything related to death and dying has kinda been hidden from the view of the public, where talking about it is almost taboo. In some ways this is unfortunate because contemplating the nature of death and dying can be a great source of wisdom and healing.

When we truly realize that our time and life here on this beautiful blue-green planet is limited, we almost always become more harmonious with ourselves and the surrounding world. Many no-good everyday habits and negative ways of thinking can be flushed out from ones system when one takes some time every now and then to ponder on the nature of life, death and how it relates to us living beings.

If you think about it, death was one of the most crucial natural things our ancestors and forefathers us were always in direct contact with, and I personally believe that from this they derived a healthy amount of existential humility and grace before nature and the universe.

With that said, in this article I’ve collected 21 powerful quotes on the topic of death and on dying, but from a spiritual perspective. Hopefully these words will stir something beautiful within your mind and soul.

Death is not extinguishing the light; it is only putting out the lamp because the dawn has come.
Rabindranath Tagore

The hour I have long wished for is now come.
St. Teresa of Avila (Supposedly her final words, 16th century)

To seek death is death’s only cure.
Attar of Nishapur (The Conference of the Birds)

Dying is a wild night and a new road.
Emily Dickinson

After your death you will be what you were before your birth.
Arthur Schopenhauer

Lovers are killed by those they love so well; No voices from the slain return.
Saadi Shirazi (If One His Praise of me Would Learn, 13th Century)

Death … It’s the only thing we haven’t succeeded in completely vulgarizing.
Aldous Huxley (Eyeless in Gaza, 1936) 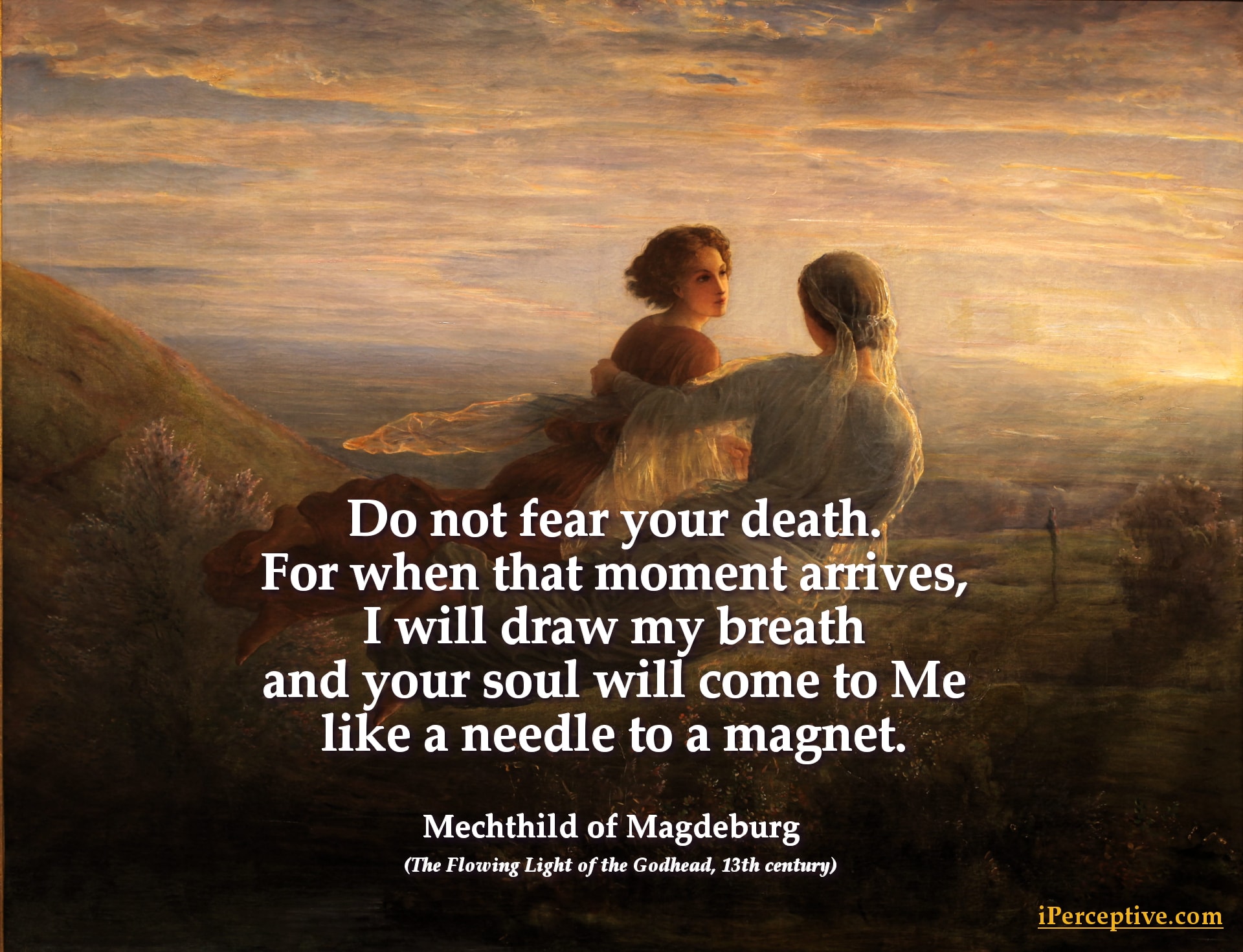 Do not fear your death.
For when that moment arrives,
I will draw my breath
and your soul will come to Me
like a needle to a magnet.”
Mechthild of Magdeburg (The Flowing Light of the Godhead, 13th century)

Death is a challenge. It tells us not to waste time… It tells us to tell each other right now that we love each other.
Leo Buscaglia (Living Loving and Learning, 1985)

I’ve told my children that when I die, to release balloons in the sky to celebrate that I graduated. For me, death is a graduation.
Elisabeth Kübler-Ross

It is only by the death of self that the soul can enter into Divine Truth, and understand in part what is the light that shineth in darkness.
Jeanne Guyon (Spiritual Maxims – 14)

The wise soul feareth not death; rather she sometimes striveth for death, she goeth beyond to meet her.
Giordano Bruno (De Immenso, 1591)

We sometimes congratulate ourselves at the moment of waking from a troubled dream: it may be so the moment after death.
Nathaniel Hawthorne (The American Notebooks, 1836)

Spiritual beings, either from the beginning or soon thereafter, become what they are to be for ever and ever.
Giovanni Pico della Mirandola (Oration on the Dignity of Man, 1486)

The purpose of life is to familiarize oneself with this after-death body so that the act of dying will not create confusion in the psyche.
Terence McKenna

You may die a hundred deaths without a break in the mental turmoil. Or, you may keep your body and die only in the mind. The death of the mind is the birth of wisdom.
Nisargadatta Maharaj (I Am That, 1973)

For those who seek to understand it, death is a highly creative force. The highest spiritual values of life can originate from the thought and study of death.
Elisabeth Kübler-Ross (Death: The Final Stage of Growth, 1975)

Jesus said: There was a rich man who had many possessions. He said: I will use my possessions to sow and reap and plant, to fill my barns with fruit, that I may have need of nothing. Those were his thoughts in his heart; and in that night he died. He who has ears, let him hear.
Jesus of Nazareth (The Gospel of Thomas – Saying 63)

The hero is the man of self-achieved submission. But submission to what? That precisely is the riddle that today we have to ask ourselves and that it is everywhere the primary virtue and historic deed of the hero to have solved. Only birth can conquer death—the birth, not of the old thing again, but of something new. Within the soul, within the body social, there must be a continuous “recurrence of birth” a rebirth, to nullify the unremitting recurrences of death. For it is by means of our own victories, if we are not regenerated, that the work of Nemesis is wrought: doom breaks from the shell of our very virtue. Peace then is a snare; war is a snare; change is a snare; permanence a snare. When our day is come for the victory of death, death closes in; there is nothing we can do, except be crucified—and resurrected; dismembered totally, and then reborn.
Joseph Campbell (The Hero with a Thousand Faces, 1949)