30+ Stoic Quotes on How to Live and on Death 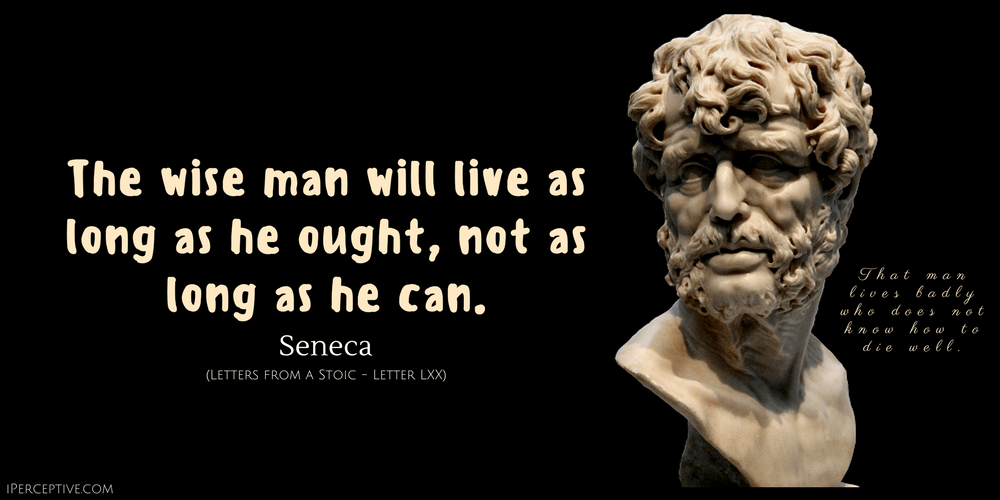 Life doesn’t have to be all that complicated.. It doesn’t have to be coloured by chronic fear and insecurity about certain aspects of existing. The main wisdom I draw from the stoic philosophers of old is that we can train ourselves to bear the difficulties and challenges of life in a more healthy way.

Well one of the ways is to align our minds with the intelligent workings of nature itself. Another way of the stoics is to hold virtue in very high regards, which inevitable leads to living a good life.

The stoics weren’t afraid to speak on things. For example for many people death is a taboo subject to speak about for more than a couple minutes. They push it away as a means of maintaining a certain psychological state of mind. In my opinion, this is a shame because contemplating about death can be such a boost to living more fully. Talk about a paradox…

With that said, here are a couple dozen powerful quotes by the ancient stoics on how to live well, fear of death and on death itself.

That man lives badly who does not know how to die well.
Seneca (Letters to Serenus – On Tranquility of Mind)

I cannot escape death, but at least I can escape the fear of it.
Epictetus (Discourses – Book I, 108)

Let each thing you would do, say or intend be like that of a dying person.
Marcus Aurelius (Meditations – Book II, 167 A.C.E.)

For it is not death or pain that is to be feared, but the fear of pain or death.
Epictetus (Discourses, 108)

Given that all must die, it is better to die with distinction than to live long.
Gaius Musonius Rufus

You will give yourself relief, if you do every act of your life as if it were the last.
Marcus Aurelius (Meditations – Book II, 167 A.C.E.)

Choose to die well while you can; wait too long, and it might become impossible to do so.
Gaius Musonius Rufus

Death is necessary and cannot be avoided. I mean, where am I going to go to get away from it?
Epictetus (Discourses – Book I, 108)

Death is not an evil. What is it then? The one law mankind has that is free of all discrimination.
Seneca (Letters from a Stoic – Letter CXXII)

No man can escape his destiny, the next inquiry being how he may best live the time that he has to live.
Marcus Aurelius (Meditations – Book VII, 167 A.C.E.)

Before I became old I tried to live well; now that I am old, I shall try to die well; but dying well means dying gladly.
Seneca (Letters from a Stoic – Letter LXI: On Meeting Death Cheerfully)

About death: Whether it is a dispersion, or a resolution into atoms, or annihilation, it is either extinction or change.
Marcus Aurelius (Meditations – Book VII, 167 A.C.E.)

We mortals also are lighted and extinguished; the period of suffering comes in between, but on either side there is a deep peace
Seneca (Letters from a Stoic)

A ship ought not to be held by one anchor, nor life by a single hope.
Epictetus (Quoted in All the Works of Epictetus – Fragment, 1758)

Don’t behave as if you are destined to live forever. What’s fated hangs over you. As long as you live and while you can, become good now.
Marcus Aurelius (Meditations – Book IV, 167 ACE)

You are younger; but what does that matter? There is no fixed count of our years. You do not know where death awaits you; so be ready for it everywhere.
Seneca (Letters from a Stoic)

Men do not care how nobly they live, but only how long, although it is within the reach of every man to live nobly, but within no man’s power to live long.
Seneca (Letters from a Stoic – Letter XXII: On the Futility of Half-way Measures)

This, then, is consistent with the character of a reflecting man, to be neither careless nor impatient nor contemptuous with respect to death, but to wait for it as one of the operations of nature.
Marcus Aurelius (Meditations – Book IX, 167 ACE)

Death and life, honor and dishonor, pain and pleasure — all these things equally happen to good men and bad, being things which make us neither better nor worse. Therefore they are neither good nor evil.
Marcus Aurelius (Meditations – Book II, 167 ACE)

Altogether the interval is small between birth and death; and consider with how much trouble, and in company with what sort of people and in what a feeble body, this interval is laboriously passed.
Marcus Aurelius (Meditations – Book IV, 167 ACE)

Alexander the Macedonian and his groom were brought to the same state by death; for either they were received among the same seminal principles of the universe, or they were alike dispersed among the atoms.
Marcus Aurelius (Meditations – Book VI, 167 ACE)

What makes for freedom and fluency in the practice of writing? Knowledge of how to write. The same goes for the practice of playing an instrument. It follows that, in the conduct of life, there must be a science to living well.
Epictetus (Discourses – Book IV, 108)

Brief is man’s life and small the nook of the earth where he lives; brief, too, is the longest posthumous fame, buoyed only by a succession of poor human beings who will very soon die and who know little of themselves, much less of someone who died long ago.
Marcus Aurelius (Meditations – Book III, 167 ACE)

If you shall be afraid not because you must some time cease to live, but if you shall fear never to have begun to live according to nature—then you will be a man worthy of the universe that has produced you, and you will cease to be a stranger in your native land.
Marcus Aurelius (Meditations – Book XI, 167 ACE)

And, on the other hand, if death comes near with its summons, even though it be untimely in its arrival, though it cut one off in one’s prime, a man has had a taste of all that the longest life can give. Such a man has in great measure come to understand the universe. He knows that honourable things do not depend on time for their growth; but any life must seem short to those who measure its length by pleasures which are empty and for that reason unbounded.
Seneca (Letters from a Stoic)

What wouldst thou be found doing when overtaken by Death? If I might choose, I would be found doing some deed of true humanity, of wide import, beneficent and noble. But if I may not be found engaged in aught so lofty, let me hope at least for this – what none may hinder, what is surely in my power – that I may be found raising up in myself that which had fallen; learning to deal more wisely with the things of sense; working out my own tranquillity, and thus rendering that which is its due to every relation of life….
Epictetus (Golden Sayings of Epictetus)

Death is a release from and an end of all pains: beyond it our sufferings cannot extend: it restores us to the peaceful rest in which we lay before we were born. If anyone pities the dead, he ought also to pity those who have not been born. Death is neither a good nor a bad thing, for that alone which is something can be a good or a bad thing: but that which is nothing, and reduces all things to nothing, does not hand us over to either fortune, because good and bad require some material to work upon. Fortune cannot take ahold of that which Nature has let go, nor can a man be unhappy if he is nothing.
Seneca (Of Consolation, To Marcia)

There are times when we ought to die and are unwilling; sometimes we die and are unwilling. No one is so ignorant as not to know that we must at some time die; nevertheless, when one draws near death, one turns to flight, trembles, and laments. Would you not think him an utter fool who wept because he was not alive a thousand years ago? And is he not just as much of a fool who weeps because he will not be alive a thousand years from now? It is all the same; you will not be, and you were not. Neither of these periods of time belongs to you. You have been cast upon this point of time; if you would make it longer, how much longer shall you make it? Why weep? Why pray? You are taking pains to no purpose.
Seneca (Letters from a Stoic)

What then is that which is able to conduct a man? One thing and only one, philosophy. But this consists in keeping the daemon within a man free from violence and unharmed, superior to pains and pleasures, doing nothing without purpose, nor yet falsely and with hypocrisy, not feeling the need of another man’s doing or not doing anything; and besides, accepting all that happens, and all that is allotted, as coming from thence, wherever it is, from whence he himself came; and, finally, waiting for death with a cheerful mind, as being nothing else than a dissolution of the elements of which every living being is compounded. But if there is no harm to the elements themselves in each continually changing into another, why should a man have any apprehension about the change and dissolution of all the elements? For it is according to nature, and nothing is evil which is according to nature.
Marcus Aurelius (Meditations – Book II, 167 A.C.E.)