Zeno of Citium: 12 Wise Quotes by the First Stoic Philosopher 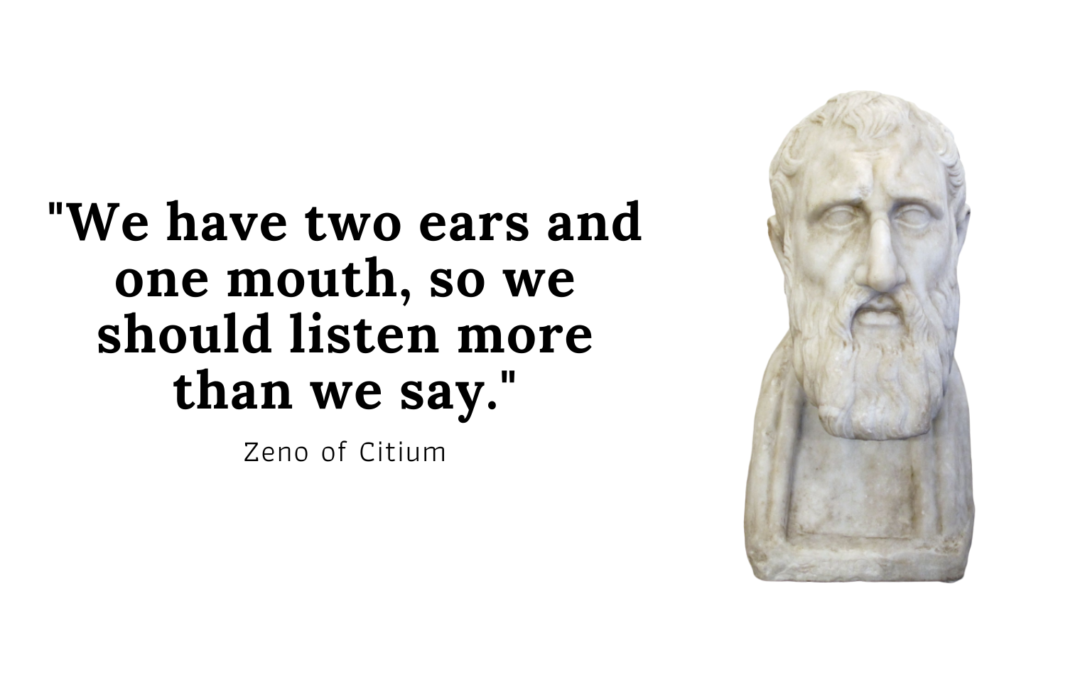 Zeno of Citium, born in 334 BCE, was the founder of the Stoic school of philosophy. Originally a Phoenician (Cyprus) merchant, he lived most of his life in mainland Greece after being shipwrecked off the coast of Attica. Most of the details concerning the life story of Zeno is derived from the biography written by Diogenes Laertius, the author of ‘Lives of Eminent Philosophers‘.

Early in his philosophical career Zeno studied under the cynic Crates of Thebes, the platonists Xenocrates and Polemon. He founded his own Stoic school of philosophy around the year 300 BCE in Athens. The stoics were initially referred to as the followers of Zeno but were later labelled ‘stoics’ because of the location, the Stoa Poikile, which was a famous site in ancient Athens, a place, or porch which Stoa literally means, where Zeno had most of his philosophical sessions with his disciples. Zeno taught in Athens for over 50 years, but supposedly refused to become an Athenian citizen because he wanted to remain loyal to his home country of Phoenicia. He died in 264 BCE.

Zeno mostly taught ethics, where he, like the Cynics before him and the many stoics after, argued that a good life, peace of mind and eudaimonia (happiness and/or blessedness) was derived from living a simple life in accordance and harmony with nature. Stoicism came to be one of the more popular schools of philosophy in the Greco-Roman world, starting from the Hellenistic period all through the Roman era.

Zeno, possibly the first anarchist in recorded history, wrote his own ‘Republic‘ or Politeia (Πολιτεία), his most famous work, in opposition to the ideal state proposed by Plato in his Republic. Though the work hasn’t survived, we nevertheless have a handful of references by other philosophers and historians concerning the content and general outline of the book. In his Republic, Zeno proposed a free and equal utopian society based on Stoic principles, a society where virtuous men and women would live together in simplicity, that is without private property, government, money, temples and laws.

With that said, here I’ve collected a handful of wise quotes by Zeno of Citium plus a few interesting quotes about him and the nature of his philosophy.

We have two ears and one mouth, so we should listen more than we talk.
Zeno of Citium (Quoted by Diogenes Laertius in the Lives of Eminent Philosophers)

Happiness is a good flow of life.
Zeno of Citium (Quoted by Stobaeus)

All the good are friends of one another.
Zeno of Citium

No evil is honorable: but death is honorable; therefore death is not evil.
Zeno of Citium (Quoted by Seneca in Letters from a Stoic)

Wellbeing is attained by little and little, and nevertheless is no little thing itself.
Zeno of Citium

Fate is the endless chain of causation, whereby things are; the reason or formula by which the world goes on.
Zeno of Citium

The end may be defined as life in accordance with nature or, in other words, in accordance with our own human nature as well as that of the universe.
Zeno of Citium (Quoted by Diogenes Laertius in the Lives of Eminent Philosophers)

A bad feeling is a commotion of the mind repugnant to reason, and against nature.
Zeno of Citium (Quoted by Cicero in Tusculan Disputations)

No one entrusts a secret to a drunken man; but one will entrust a secret to a good man; therefore, the good man will not get drunk.
Zeno of Citium (Quotes by Seneca in Letters from a Stoic)

If melodiously piping flutes sprang from the olive, would you doubt that a knowledge of flute-playing resided in the olive? And what if plane trees bore harps which gave forth rhythmical sounds? Clearly you would think in the same way that the art of music was possessed by plane trees. Why, then, seeing that the universe gives birth to beings that are animate and wise, should it not be considered animate and wise itself?
Zeno of Citium (Quoted by Cicero in De Natura Deorum)

Zeno stretched out his fingers, and showed the palm of his hand, – “Perception,” – he said, – “is a thing like this.”- Then, when he had closed his fingers a little, – “Assent is like this.” – Afterwards, when he had completely closed his hand, and showed his fist, that, he said, was Comprehension. From which simile he also gave that state a new name, calling it katalepsis (κατάληψις). But when he brought his left hand against his right, and with it took a firm and tight hold of his fist: – “Knowledge” – he said, was of that character; and that was what none but a wise person possessed.
Cicero in Academica

Zeno, then, defines nature by saying that it is artistically working fire, which advances by fixed methods to creation. For he maintains that it is the main function of art to create and produce, and that what the hand accomplishes in the productions of the arts we employ, is accomplished much more artistically by nature, that is, as I said, by artistically working fire, which is the master of the other arts.
Cicero in De Natura Deorum

It is true indeed that the so much admired Republic of Zeno, first author of the Stoic sect, aims singly at this, that neither in cities nor in towns we should live under laws distinct one from another, but that we should look upon all people in general to be our fellow-country folk and citizens, observing one manner of living and one kind of order, like a flock feeding together with equal right in one common pasture.
Plutarch in On the Fortune of Alexander

Some there are, and among them Cassius the Sceptic and his disciples, who accuse Zeno at length. Their first count is that in the beginning of his Republic he pronounced the ordinary education useless: the next is that he applies to all men who are not virtuous the opprobrious epithets of foemen, enemies, slaves, and aliens to one another, parents to children, brothers to brothers, friends to friends. Again, in the Republic, making an invidious contrast, he declares the good alone to be true citizens or friends or kindred or free men; and accordingly in the view of the Stoics parents and children are enemies, not being wise. Again, it is objected, in the Republic he lays down community of wives, and at line 200 prohibits the building of temples, law-courts and gymnasia in cities; while as regards a currency he writes that we should not think it need be introduced either for purposes of exchange or for travelling abroad. Further, he bids men and women wear the same dress and keep no part of the body entirely covered
Diogenes Laertius in the Lives of Eminent Philosophers

Further, they say that the wise man will feel affection for the youths who by their countenance show a natural endowment for virtue. So Zeno in his Republic. … It is also their doctrine that amongst the wise there should be a community of wives with free choice of partners, as Zeno says in his Republic and Chrysippus in his treatise On the Republic, … under such circumstances we shall feel paternal affection for all the children alike, and there will be an end of the jealousies arising from adultery.
Diogenes Laertius in the Lives of Eminent Philosophers