40 Insightful Quotes by the Stoic Philosophers 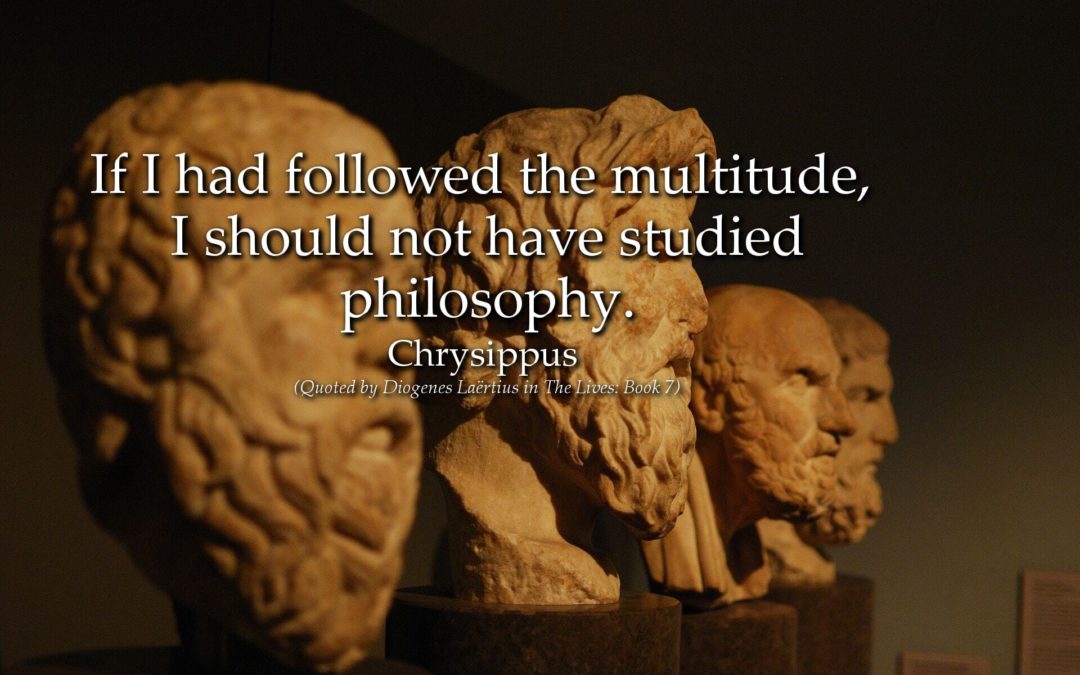 The stoic philosophers of the ancient world were wise individuals that’s for sure. The main goal of their philosophy was mostly directed towards the cultivation of virtue and the conscious detachment from no-good passions, which all mortal men were inclined with.

The stoics also had a vision of a ideal sage which transcended these usual limitations that normal people had. The Stoic Sage was constantly in a state of tranquility and contentment with whatever life presented unto him. For some stoics the sage was just an ideal target to aim against and not a concrete reality to be realized, while for others the Stoic sage was indeed a possible reality to attain to.

Did you know that even though Stoicism originated in Ancient Greece with figures such as Zeno of Citium and Chrysippus, who were very much influenced by Cynic philosophy which in turn was chiefly derived from Socrates, while today however the most prominent stoics we know of are those of whom lived during the era of the Roman Empire?

These notable stoics in chronological order are the three Roman stoics: Seneca, Epictetus and Marcus Aurelius.

So why was this the case? Well mainly because the material from their Greek counterparts or antecedents is so paltry and scant in comparison, where their ideas and thoughts has only survived in fragments and excerpts.

Having said that, here is a compilation of quotations which will serve as our tribute to the wisdom of the stoics! 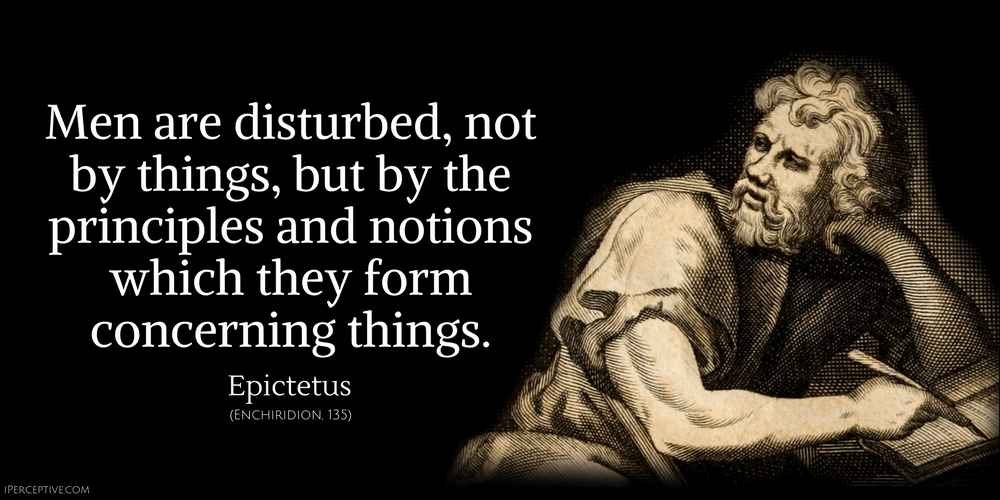 Virtue is the health of the soul.
Aristo of Chios (Fragment)

A good mind is a lord of a kingdom.
Seneca (Thyestes)

There is one great law throughout nature.
Cleanthes (Hymn to Zeus)

First learn the meaning of what you say, and then speak.
Epictetus (Discourses, 108 A.D)

The universe itself is God and the universal outpouring of its soul.
Chrysippus (Quoted by Cicero in De Natura Deorum)

Waste no more time arguing about what a good man should be. Be one.
Marcus Aurelius (Meditations – Book X, 167 A.C.E.)

Enjoy present pleasures in such a way as not to injure future ones.
Seneca (Letters from a Stoic)

No form of God is conceivable.
Aristo of Chios (Quoted by Cicero)

A ship ought not to be held by one anchor, nor life by a single hope.
Epictetus (Quoted in All the Works of Epictetus – Fragment, 1758)

If I had followed the multitude, I should not have studied philosophy.
Chrysippus (Quoted by Diogenes Laërtius in The Lives: Book 7)

It is not the man who has too little, but the man who craves more, that is poor.
Seneca (Letters from a Stoic – Letter II: On the Terrors of Death)

No man can have a peaceful life who thinks too much about lengthening it.
Seneca (Letters from a Stoic – Letter IV: On the Terrors of Death)

Give thyself time to learn something new and good, and cease to be whirled around.
Marcus Aurelius (Meditations – Book II, 167 A.C.E.)

This thou must always bear in mind, what is the nature of the whole, and what is my nature.
Marcus Aurelius (Meditations – Book II, 167 A.C.E.)

Living virtuously is equal to living in accordance with one’s experience of the actual course of nature.
Chrysippus (Quoted by Diogenes Laërtius in The Lives: Book 7)

The life of men,” he says, “who pass their time in the midst of affairs, and who wish to be helpful to themselves and to others, is exposed to constant and almost daily troubles and sudden dangers. To guard against and avoid these one needs a mind that is always ready and alert, such as the athletes have who are called ‘pancratists.’
Panaetius (On Duties – Quoted by Aulus Gellius in Attic Nights)

Men are disturbed, not by things, but by the principles and notions which they form concerning things.
Epictetus (Enchiridion, 135)

But those who forget the past, neglect the present, and fear for the future have a life that is very brief and troubled.
Seneca (On The Shortness of Life – Chapter XVI)

Nature gave us reason, in order that it might survey everything else, and, together with all things, or rather prior to all things, might direct its attention to Nature herself.
Hierocles (On Wedlock)

One ought to seek out virtue for its own sake, without being influenced by fear or hope, or by any external influence. Moreover, that in that does happiness consist.
Zeno of Citium (Quoted by Diogenes Laërtius in The Lives: Book 7)

It is not that we have so little time but that we lose so much. … The life we receive is not short but we make it so; we are not ill provided but use what we have wastefully.
Seneca (On The Shortness of Life – Chapter I)

Nothing great is created suddenly, any more than a bunch of grapes or a fig. If you tell me that you desire a fig, I answer you that there must be time. Let it first blossom, then bear fruit, then ripen.
Epictetus (Discourses, 108)

He who has equipped himself for the whole of life does not need to be advised concerning each separate thing, because he is now trained to meet his problem as a whole; for he knows not merely how he should live with his wife or his son, but how he should live aright.
Aristo of Chios (Quoted by Seneca’s Epistles)

If melodiously piping flutes sprang from the olive, would you doubt that a knowledge of flute-playing resided in the olive? And what if plane trees bore harps which gave forth rhythmical sounds? Clearly you would think in the same way that the art of music was possessed by plane trees. Why, then, seeing that the universe gives birth to beings that are animate and wise, should it not be considered animate and wise itself?
Zeno of Citium (Quoted by Cicero)

Death is a release from and an end of all pains: beyond it our sufferings cannot extend: it restores us to the peaceful rest in which we lay before we were born. If anyone pities the dead, he ought also to pity those who have not been born. Death is neither a good nor a bad thing, for that alone which is something can be a good or a bad thing: but that which is nothing, and reduces all things to nothing, does not hand us over to either fortune, because good and bad require some material to work upon. Fortune cannot take ahold of that which Nature has let go, nor can a man be unhappy if he is nothing.
Seneca (Of Consolation, To Marcia)

For are not even savage animals, and such as are naturally most hostile to our race, and who are taken away by violence, and at first are detained by chains, and confined in iron cages, are rot these afterwards rendered mild by a certain mode of treatment, and by daily supplying them with food? And will not the man who is a brother, or even any casual person, who deserves attention in a much greater degree than a brute, be changed to milder manners by proper treatment, though he should not entirely forsake his rusticity? In our behaviour, therefore, towards every man, and in a much greater degree towards a brother, we should imitate the reply of Socrates to one who said to him, “May I die unless I am revenged on you.” For his answer was, “May I die, if I do not make you my friend.”
Hierocles (On Fraternal Love – Fragment)

What then is that which is able to conduct a man? One thing and only one, philosophy. But this consists in keeping the daemon within a man free from violence and unharmed, superior to pains and pleasures, doing nothing without purpose, nor yet falsely and with hypocrisy, not feeling the need of another man’s doing or not doing anything; and besides, accepting all that happens, and all that is allotted, as coming from thence, wherever it is, from whence he himself came; and, finally, waiting for death with a cheerful mind, as being nothing else than a dissolution of the elements of which every living being is compounded. But if there is no harm to the elements themselves in each continually changing into another, why should a man have any apprehension about the change and dissolution of all the elements? For it is according to nature, and nothing is evil which is according to nature.
Marcus Aurelius (Meditations – Book II, 167 A.C.E.)