50+ Sufi Quotes That Will Inspire and Enlighten Your Soul 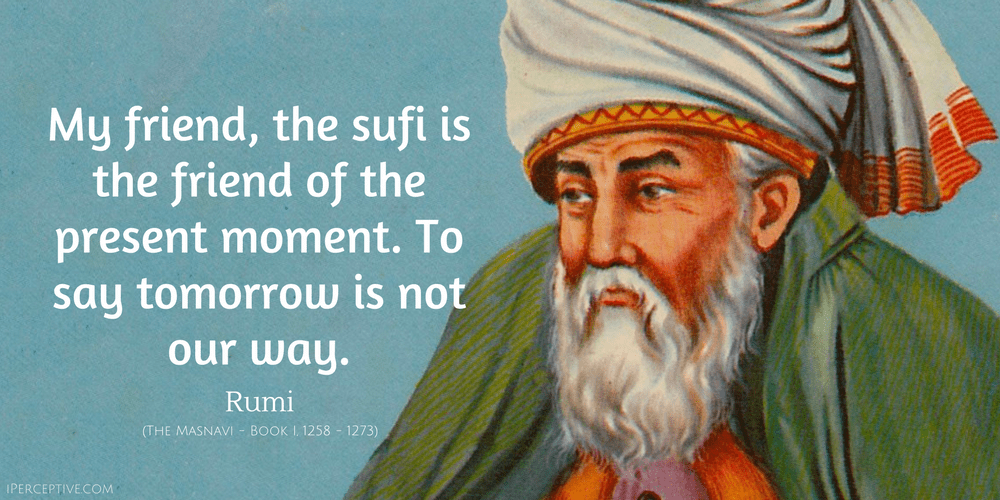 What is a sufi? Is there such a thing as ‘islamic mysticism’? Are sufis even muslim?

The term Sufi has historically been applied to Muslim ascetics who, like Christian hermits, dressed in woolen robes as a symbol of repentance and self-denial. Sufis are known for lacking interest in neither money nor power. While most of Sufis see themselves as Muslims, it happens that other orthodox muslims often consider them to be blasphemers. Why? Because they try to get as close to God as possible, through direct experience instead of indirectly through hearsay and belief alone.

The Sufis are well-known world-wide, for their exquisite poems and their music, both of which they consider to be methods that brings them closer to God. Sufis also near God by avoiding eating food and drink for longer periods of time or by reading aloud from the Qur’an until they reach a state of ecstasy. The same state can be achieved by dancing like the Turkish Sufis, who are referred to as the dancing dervishes.

I am the truth.
Mansur Al-Hallaj (Ana ‘l-Ḥaqq in Arabic)

Let love lead your soul.
Attar of Nishapur (The Newborn)

My Beloved is always with me.
Rabia al-Basri (8th century) 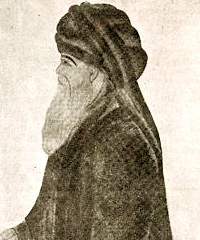 I am no one in existence but myself.
Ibn Arabi (The Universal Tree and the Four Birds)

I am the drop that contains the ocean.
Yunus Emre

Only the word “I” divides me from God.
Yunus Emre

From each, love demands a mystic silence.
Attar of Nishapur (Intoxicated by the Wine of Love)

The true man attaches his heart to none but God.
Bayazid Bastami (Quoted by Attar in the Memorial of the Saints)

Hide not behind the veil, my love, I long to have a glimpse of you.
Bulleh Shah

If I told you about a land of love, friend, would you follow me and come?
Yunus Emre (The Drop that Became the Sea)

The thing we tell of can never be found by seeking, yet only seekers find it.
Bayazid Bastami

Lovers are killed by those they love so well; No voices from the slain return.
Saadi Shirazi (Bustan, 1257) 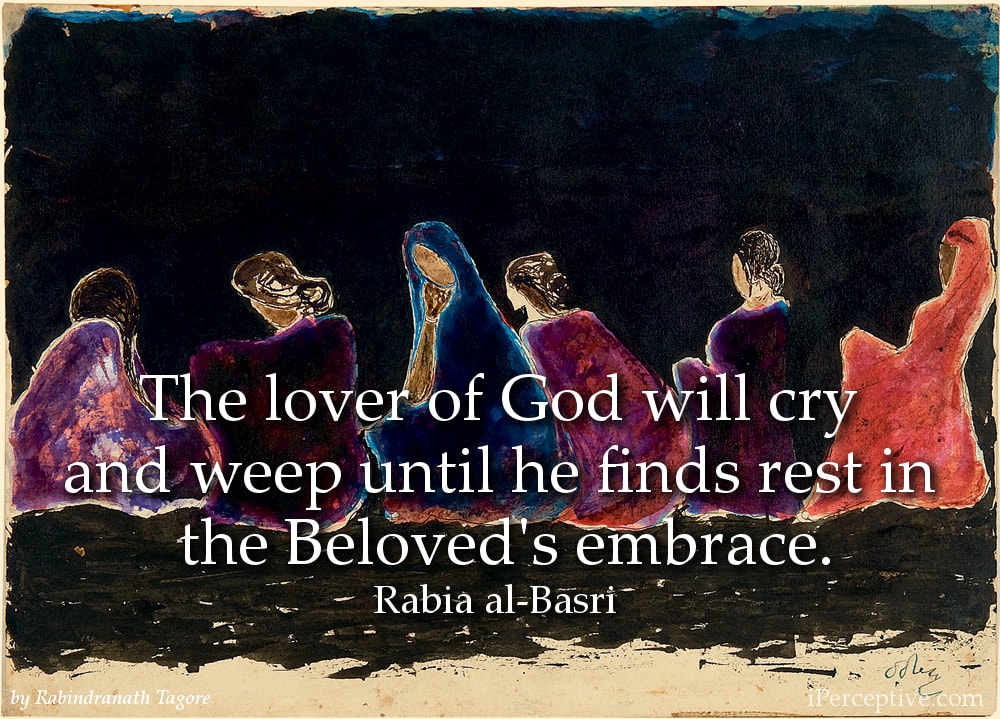 The lover of God will cry and weep until he finds rest in the Beloved’s embrace.
Rabia al-Basri (8th century)

When in the eyes of the beloved riches count not, gold and dust are as one to thee.
Saadi Shirazi (If One of His Praise of Me Would Learn, 13th century)

The beloved does not drink a single drop of water without seeing His Face in the cup.
Mansur Al-Hallaj

To Thee Thou hast drawn my love, O Fakir… Kabîr says, “Thou hast united Thy heart to my heart, O Fakir!”
Kabir (Songs of Kabir – Translated by Tagore) 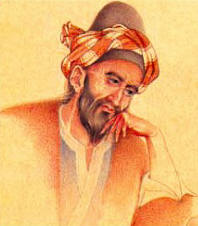 For a day, just for one day, Talk about that which disturbs no one And bring some peace into your Beautiful eyes.
Hafez (The Gift)

What have I to do with the window? When I am before you, I close my eyes to everything else. I have not come to stare about.
Bayazid Bastami (When his master asked him to get a book from the window)

The Sea
Will be the Sea
Whatever the drop’s philosophy.
Attar of Nishapur

I saw my Lord with the eye of the heart
I asked, ‘Who are You?’
He replied, ‘You’
Mansur Al-Hallaj (Tawasin – The Ta-Sin of the Point)

For I have learned that
every heart will get
What it prays for
Most.
Hafez (The Subject Tonight is Love)

Happy are the days of them that are infatuated by love for him, whether they be sorrowed by separation from Him or made joyous by His presence.
Saadi Shirazi (Bustan, 1257)

Strange – is it not? – that of the myriads who Before us passed the door of Darkness through, Not one returns to tell us of the road Which to discover we must travel too.
Omar Khayyam (The Rubaiyat – LXIV, 1120) 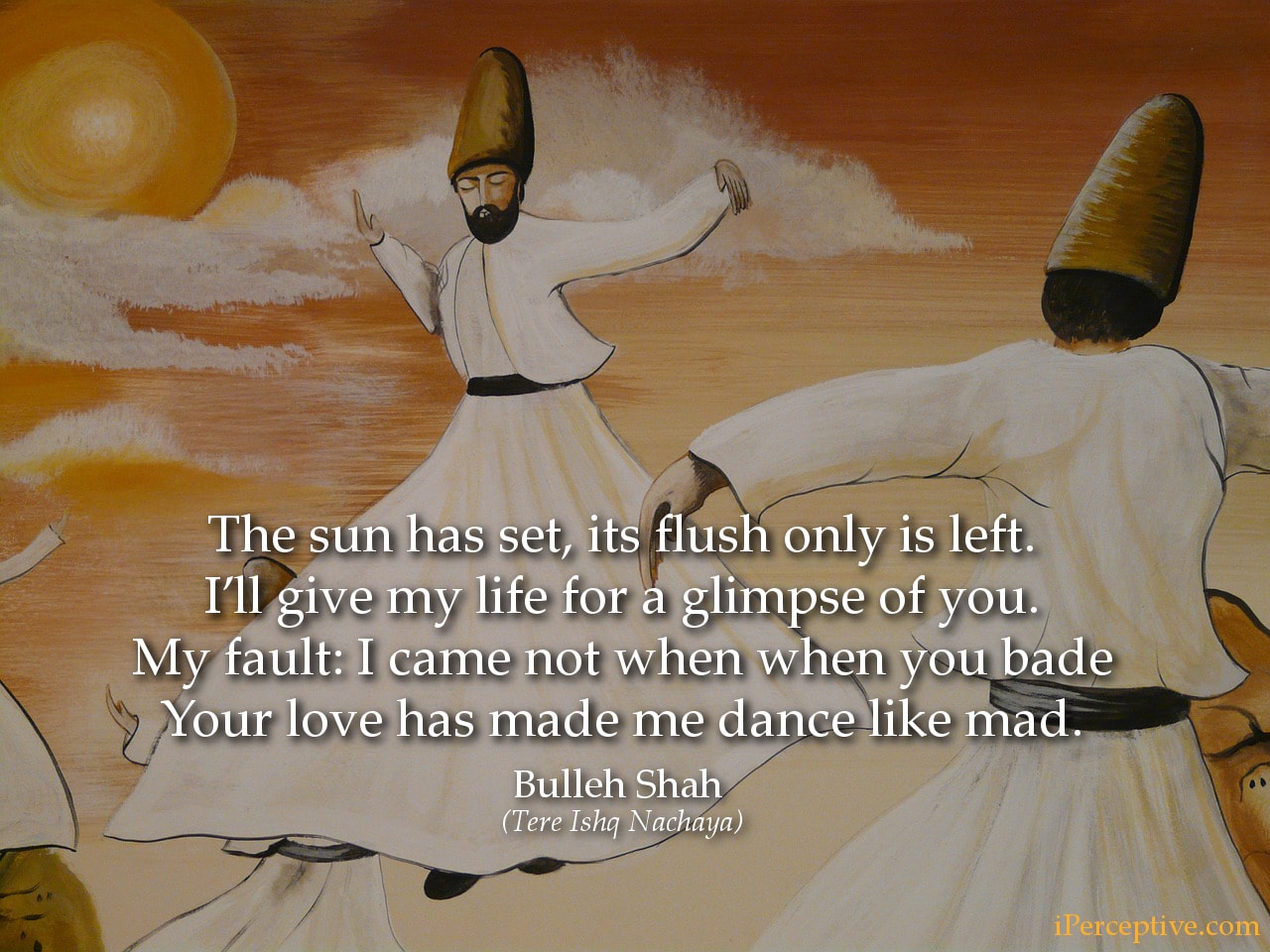 The sun has set, its flush only is left.
I’ll give my life for a glimpse of you.
My fault: I came not when when you bade
Your love has made me dance like mad.
Bulleh Shah (Tere Ishq Nachaya)

Let love lead your soul.
Make it a place to retire to,
a kind of monastery cave,
a retreat for the deepest core of your being.
Attar of Nishapur 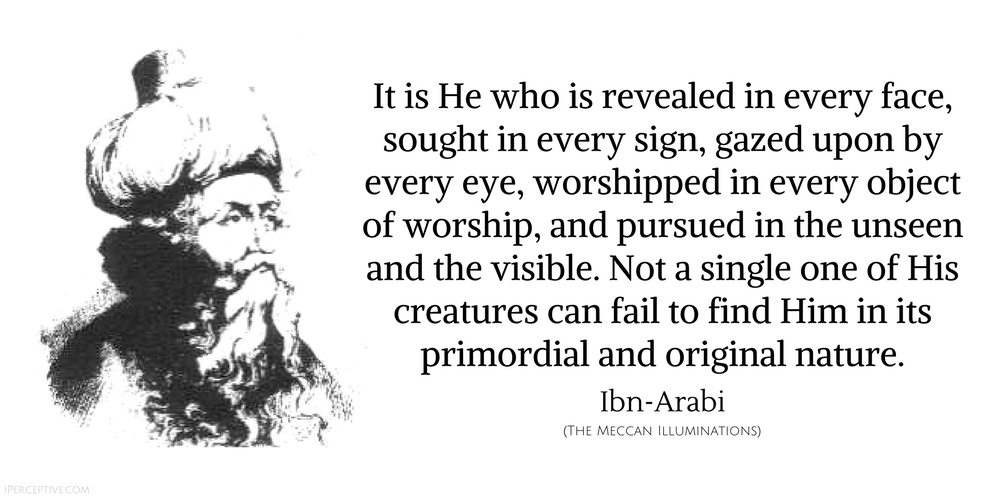 It is He who is revealed in every face, sought in every sign, gazed upon by every eye, worshipped in every object of worship, and pursued in the unseen and the visible. Not a single one of His creatures can fail to find Him in its primordial and original nature.
Ibn Arabi (The Meccan Illuminations)

I sent my Soul through the Invisible,
Some letter of that After-life to spell:
And by and by my Soul return’d to me,
And answer’d “I Myself am Heav’n and Hell:”
Omar Khayyam (The Rubaiyat – LXIV, 1120)

Mohammed came to perceive God,
And saw God’s truth in his selfhood.
Providence exists everywhere
So long as there are eyes to see.
Yunus Emre

O I have two ways of loving You: a selfish one and another way that is worthy of You. In my selfish love, I remember You alone. In that other love, You lift the veil and let me feast my eyes on Your living face.
Rabia al-Basri (8th century)

Of what utility are the rich,
If they are clouds of August,
And do not rain upon any one;
Or the foundation of the sun,
And do not give light to anyone;
Saadi Shirazi (Gulistan, 1258) 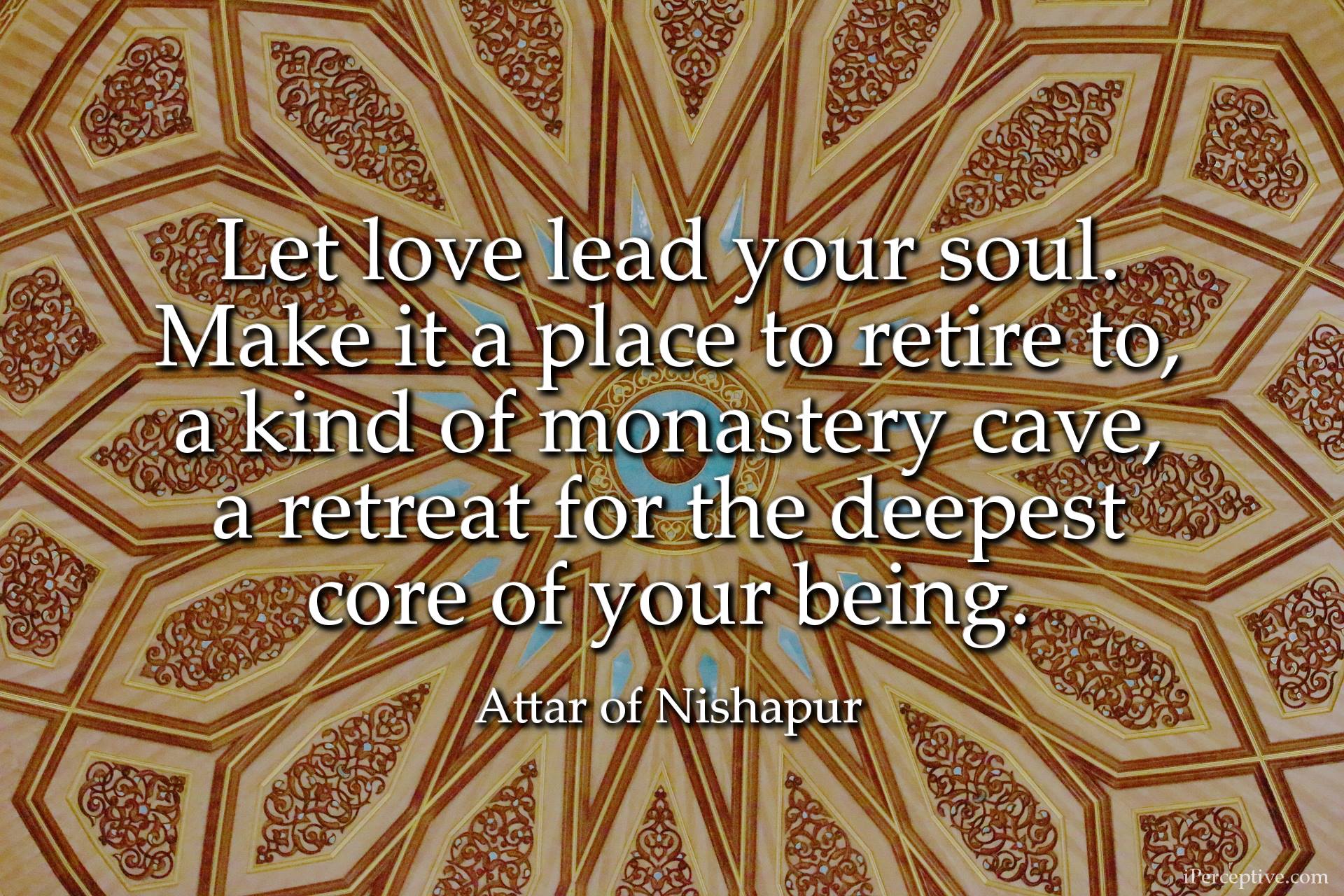 Let love lead your soul.
Make it a place to retire to,
a kind of monastery cave,
a retreat for the deepest core of your being.
Attar of Nishapur 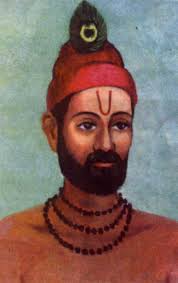 Lift the veil
that obscures
the heart
and there
you will find
what you are
looking for.
Kabir (Dohas of Kabir)

Wanderer, you are distraught; Be calm. Our
glorious King cannot admit
All comers to His court; it is not fit
That every rascal who sleeps out the night
Should be allowed to glimpse its radiant light.
Most are turned back, and few perceive the throne;
Among a hundred thousand there is one.
Attar of Nishapur (The Conference of the Birds)

The thirst of my heart cannot be quenched
By sipping limpid water even if I drink oceans of it.
Blessed is the man of happy destiny whose eye
Alights every morning on such a countenance.
One drunk of wine awakens at midnight,
One drunk of the cupbearer on the morn of resurrection.
Saadi Shirazi (Gulistan – Chapter 5, 1258) 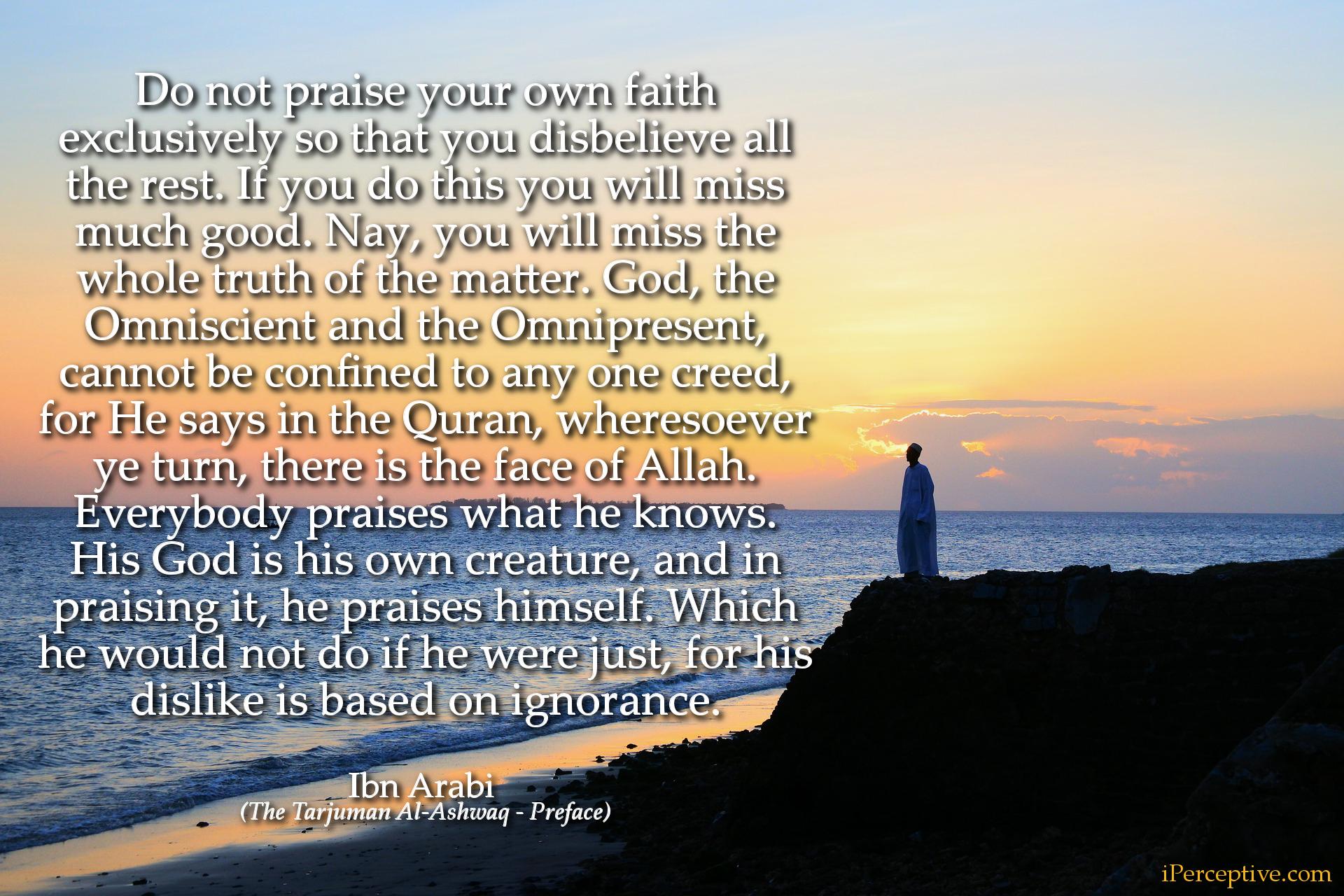 Do not praise your own faith exclusively so that you disbelieve all the rest. If you do this you will miss much good. Nay, you will miss the whole truth of the matter. God, the Omniscient and the Omnipresent, cannot be confined to any one creed, for He says in the Quran, wheresoever ye turn, there is the face of Allah. Everybody praises what he knows. His God is his own creature, and in praising it, he praises himself. Which he would not do if he were just, for his dislike is based on ignorance.
Ibn Arabi (The Tarjuman Al-Ashwaq – Preface)

On the side of the pure divinity of Allah, He remains, transcending all dependent things, praise be to Allah who is not touched by any secondary cause. His proof is strong, and His power glorious. He, the Lord of Splendor and Glory and Majesty. The Unaccountable One with arithmetical Unity. No definition nor counting nor beginning nor end touches Him. His existence is a marvel since He is removed from existence. He alone knows Himself, Master of Majesty and magnanimity. Creator of souls and bodies.
Mansur Al-Hallaj (Tawasin – The Ta-Sin of the Disconnection-From-Forms)

The Truth is yourself, but not your mere bodily self.
Your real self is higher than ‘you’ and ‘me.’
This visible ‘you’ which you fancy to be yourself
Is limited in place, the real ‘you’ is not limited.
Why, O pearl, linger you trembling in your shell?
Esteem not yourself mere sugar-cane, but real sugar.
This outward ‘you’ is foreign to your real ‘you;’
Cling to your real self, quit this dual self.
Rumi (The Masnavi, 1258 – 1273) 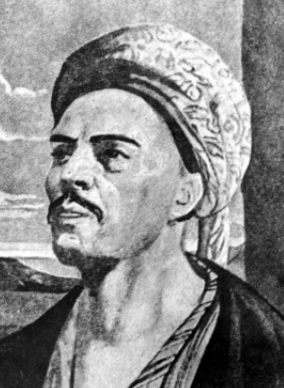 We drank wine from the Cupbearer
At an inn higher than the sky.
Our souls are goblets in His hands,
Deep in His ecstasy we lie.

At our private place of meeting,
Where our hearts are scorched with yearning
Like moths, the sun and the moon ring
Our candle whose flames rise high.

Yunus, don’t tell these words of trance
To those steeped in dark ignorance,
Can’t you see how swiftly the chance
Of ignorant men’s lives goes by?

Do you know how beautiful You are?
I think not, my dear.
For as you talk of God,
I see great parades with wildly colorful bands
Streaming from your mind and heart,
Carrying wonderful and secret messages
To every corner of this world.
I see saints bowing in the mountains
Hundreds of miles away
To the wonder of sounds
That break into light
From your most common words.
Hafez (Saints Bowing in the Mountains)

I died as a mineral and became a plant,
I died as plant and rose to animal,
I died as animal and I was Man.
Why should I fear? When was I less by dying?
Yet once more I shall die as Man, to soar
With angels bless’d; but even from angelhood
I must pass on: all except God doth perish.
When I have sacrificed my angel-soul,
I shall become what no mind e’er conceived.
Oh, let me not exist! for Non-existence
Proclaims in organ tones,
To Him we shall return..
Rumi (The Masnavi – Book III, Story XVII, 1258 – 1273)

In this valley, Love is represented by fire, Reason by smoke. When Love bursts into flame, Reason is forthwith dissipated like smoke. Reason cannot coexist with Love’s mania, for Love has nothing whatever to do with human Reason. If ever you attain a clear vision of the unseen world, then only will you be able to realize the source of Love. By the odour of Love every atom in the world is intoxicated. It owes its existence to the existence of Love.
If you possessed the spiritual insight to penetrate the invisible world, the atoms of the visible world would also become unveiled to you, but if you regard these with the eye of intellect, you will never comprehend love as you should. Only one who has gone through the test and has become free can feel this spiritual devotion. You have not acquired such experience. You have not even the inspiration of love. You are selfish, dead, so to say, and therefore unworthy of love. He who enters upon this path should have thousands of hearts, fired with devotion, so that every moment he may be able to sacrifice a hundred souls.
Attar of Nishapur (The Conference of the Birds – Part 3: The Valley of Love)

For more by these graceful and love-infused Sufi Mystics have a look at this list below!