Power and Symbolism During the Time of Augustus 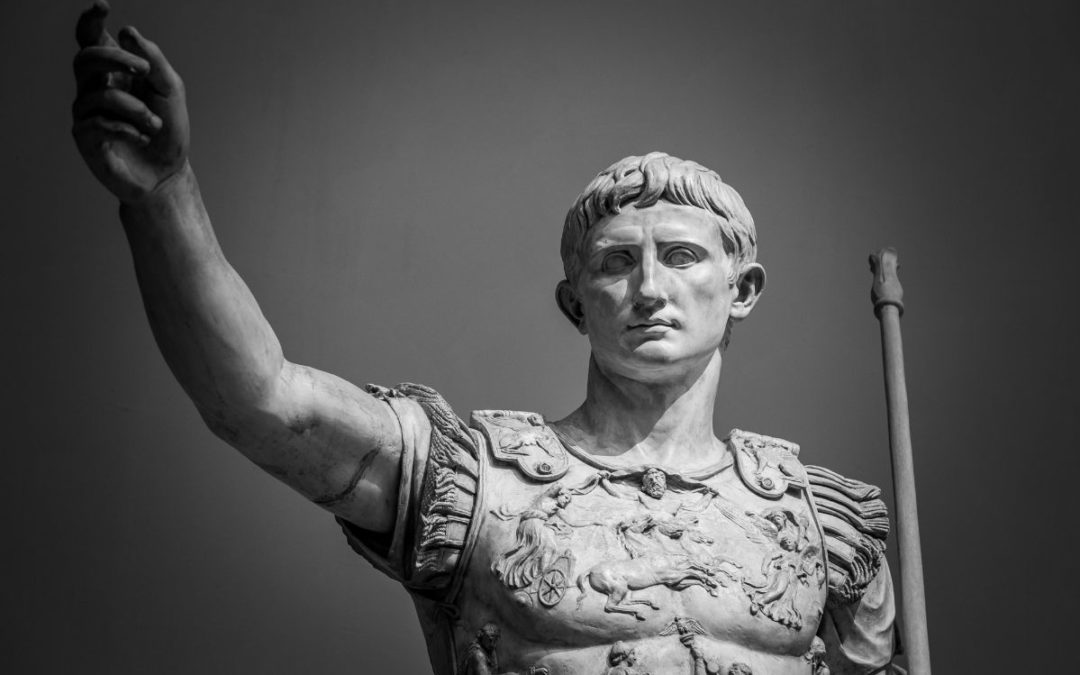 Before Octavian became emperor Augustus, his first strategic effort was to cement his lineage and father-son relationship with the recently murdered dictator Julius Caesar. By strengthening his relationship with the influential Julian house, he acquired many benefits and rights that would be almost impossible to achieve otherwise. This is considering how Caesar was a patrician and had long proclaimed his divine descent to the goddess Venus and the mythical hero Aeneas. As depicted on some denari coins, its quite evident how the Roman state under Octavian tried to solidify the strong relationship between Caesar and Octavian in the eyes of the people. This proved to be extremely effective, especially when Caesar was later declared a god, which Octavian used very cleverly to then be called or to call himself “divi filius“, or the son of a god. Moreover just as Paul Zanker points out in his seminal work “The Power of Images in the Age of Augustus“, Octavian’s great rival Marcus Antonius (Mark Anthony) had no chance to effectively convey the same godly self-image. This was among Octavian’s greatest advantage over Anthony when it came to winning over the Senate and the people’s trust, which was essential.

Octavian’s enthusiasm for Greek art led him to use it quite often for his own political benefits, especially for the purpose of communicating and conveying commendable character and virtue. Clothing and equipment seemed to be an important part of the symbolic language used to convey these special touches. Inspiration from Greek attire led to the development of the Toga garment, which became more and more popular and meaningful during reign of Augustus, which was, among other things, a sign of moral and character’s health. Another example could be that they took the perfect symmetry and shape of a classic god, and then applied it to Augustus. The visual characteristics that were considered beautiful or that signified exceptional strength was used to create and convey the ideal image.

War of the “Gods”

The “mythological” warfare that arose from the rivalry between Augustus and Mark Anthony shows a very interesting side to both men. It is clear in both that they became more and more aware of the importance of the religious in relation to their individual power position and state. Despite Augustus’ unquestionable advantage in this regard, Anthony nevertheless dared to convey his own elevated image. In a way it became some sort of a “war of the gods”, as Anthony chose Dionysus while Augustus chose Apollo as the patron gods who represented them. The mythological character and attributes of these gods showed how both men viewed themselves and what they considered to be ideals to strive for. Various symbolism was also used to further repeat and reaffirm these links with the gods. In Augustus’ case, he stated to use the Sphinx to once again convey his relationship with Apollo.

When the war against Anthony came to an end, something a little different appeared in the Roman world. A new imperial style had emerged and the symbolism reached its height as Octavian’s victories over his enemies appeared in more and more creative imagery. An example is when the victor goddess Victoria is shown on denari coins with magnificent wings and a laurel wreath, or when the victory over Anthony or Sextus Pompey is depicted where Augustus resembles a sea god trampling over his foe with his sea horses.

Another interesting image is one that displayed Rome as an unstable republic and Augustus as its savior. Which the Republic subsequently bows down to, right in front of Augustus, who then through his unrivalled might and power raises it.

Moreover some plants such as the bay laurel tree were also a very common symbol during this period, as the plant symbolized both Apollo and that the victory wreaths were made of laurel.

When Augustus’ position as the largest holder of power in Rome became established, the imagery changed once again. The gods and religion was still the focus, but the representation evolved tremendously. As previously mentioned, archaic and classical Greece was a great role model, but the artistic prowess that grew in Rome became not only emulation but also in some regards a surpassing of the elegance of Greek art.

One of the many new features that characterized the new Roman Golden Age was that the festivities began. The optimism of the people grew and their confidence in their new leader, Augustus, grew with it. The symbolism was now focused on displaying and providing support for every citizen’s life and living conditions. Qualities such as health, fertility and refined morals were what was highlighted in the visual representations. It was palpable sense of abundance and moral elegance that would characterize this new age. Vines were used frequently in the symbolism. It was the abundant nature and its bearing fruits that was depicted. If you believed the imagery and symbolism you would be convinced that these were the best of times and the long-awaited paradise was finally here. It was a great cake and Augustus wanted to make every Roman citizen think that they could get some of it.