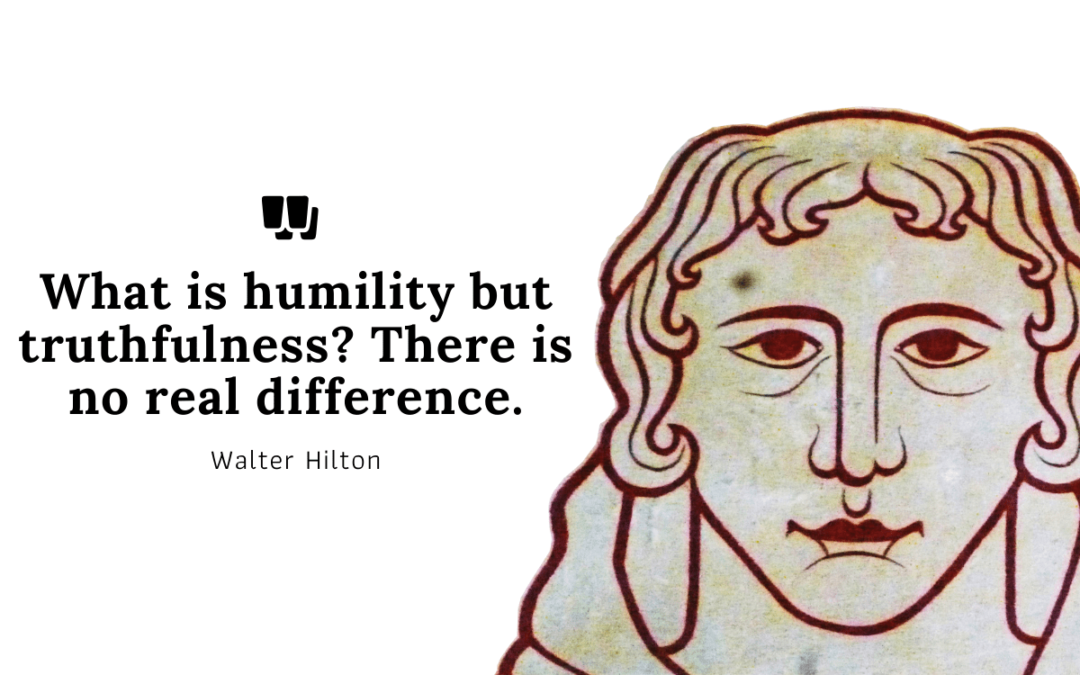 Walter Hilton was a English mystic in the 14th century. He is best known for his work “The Ladder of Perfection” and for being one of the first to write mystic theology in the English language.

Walter Hilton was born in either 1340 or 1345, and seems to have studied and taught at Cambridge, after which he became an Augustinian priest in the small village of Thurgarton in Nottinghamshire, England. He wrote extensively in both English and Latin, and his writings became influential well into the 15th century and onwards. He is most known for “The Ladder of Perfection” (Scala perfectionis), which consisted of two parts, first of which was aimed at a female hermit and the second part which was for a more general .

Hilton had a very open mind when it came to spiritual practice, as he was keenly aware that people are different and that one formula could not suit all spiritual practitioners. Hilton passed away in Thurgarton in the year 1396.

In this article I’ve decided to honour Hilton by sharing some of his spiritual wisdom.

What is humility but truthfulness? There is no real difference.
Walter Hilton (The Ladder of Perfection – Book II: Chapter 20)

This fountain of love issues from our Lord alone, and no stranger may approach it.
Walter Hilton (The Ladder of Perfection – Book I: Chapter 4)

It is easier to renounce worldly possessions than it is to renounce the love of them.
Walter Hilton (The Ladder of Perfection)

For the more love and covetousness of any earthly thing is with thee, the less is the love of God in thy heart.
Walter Hilton (The Ladder of Perfection – Book I: Chapter 7)

Prayer is naught but a rising desire of the heart into God by withdrawing of the heart from all earthly thoughts.
Walter Hilton 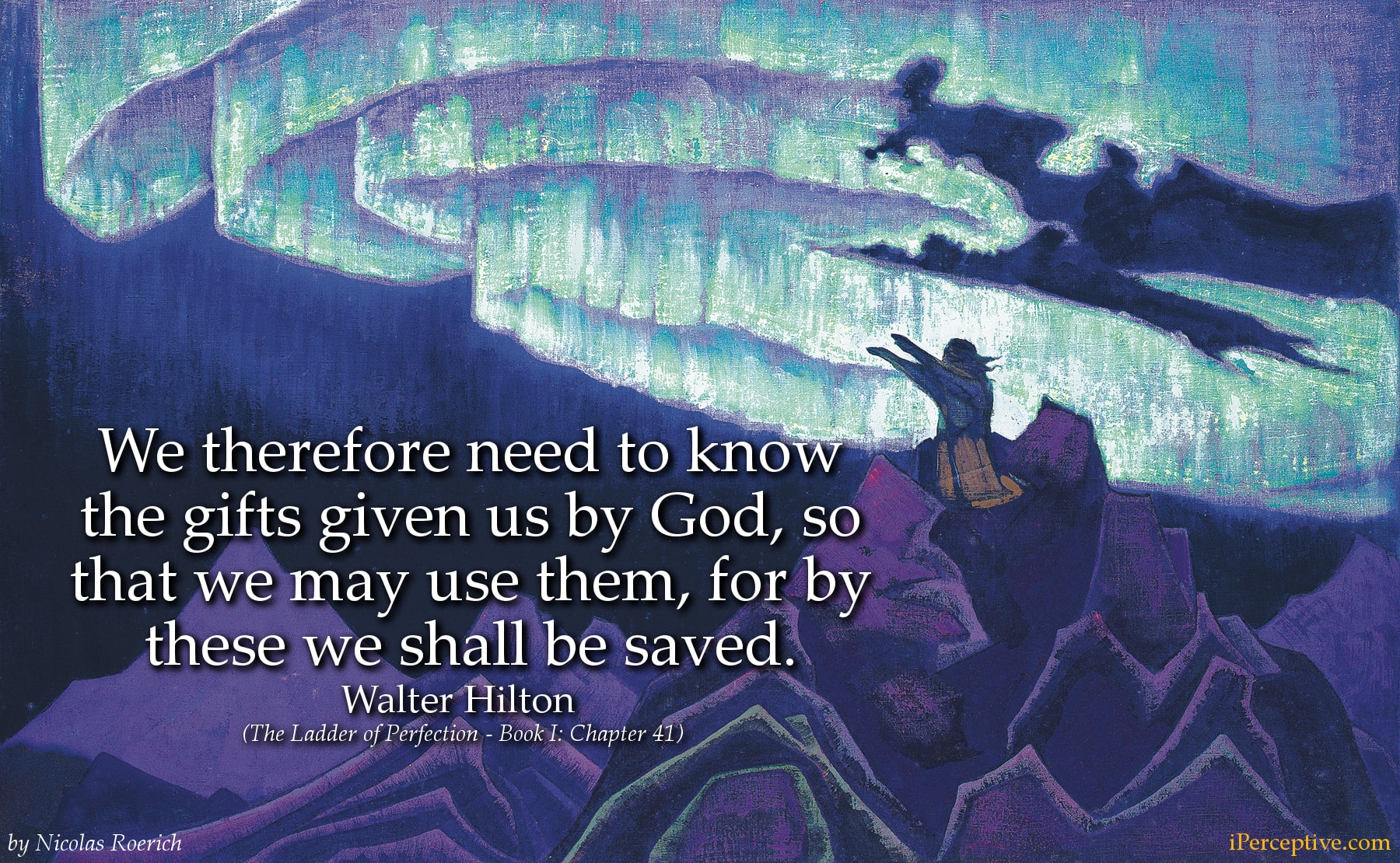 We therefore need to know the gifts given us by God, so that we may use them, for by these we shall be saved.
Walter Hilton (The Ladder of Perfection – Book I: Chapter 41)

BUT thou shalt ever seek with great diligence in prayer that thou mayest come to a spiritual feeling or sight of God. And that is, that thou mayest know the wisdom of God, the endless might of Him, His great goodness in Himself and in His creatures; for this is Contemplation,
Walter Hilton (The Ladder of Perfection – Book I: Chapter 12)

The purpose of prayer is not to inform our Lord what you desire, for He knows all your needs. It is to render you able and ready to receive the grace which our Lord will freely give you. This grace cannot be experienced until you have been refined and purified by the fire of desire in devout prayer. For although prayer is not the cause for which our Lord gives grace, it is nevertheless the means by which grace, freely given, comes to the soul.
Walter Hilton (The Ladder of Perfection – Book I: Chapter 24)

Since you have forsaken the world and turned wholly to God, you are symbolically dead in the eyes of men; therefore, let your heart be dead to all earthly affections and concerns, and wholly devoted to our Lord Jesus Christ. For you must be well aware that if we make an outward show of conversion to God without giving Him our hearts, it is only a shadow and pretence of virtue, and no true conversion. Any man or woman who neglects to maintain inward vigilance, and only makes an outward show of holiness in dress, speech, and behavior, is a wretched creature. For they watch the doings of other people and criticize their faults, imagining themselves to be something when in reality they are nothing. In this way they deceive themselves. Be careful to avoid this, and devote yourself inwardly to His likeness by humility, charity, and other spiritual virtues. In this way you will be truly converted to God.
Walter Hilton (The Ladder of Perfection – Book I: Chapter 1)

THE third sort, which is as perfect Contemplation as can be had in this life, consisteth both in knowing and affecting; that is, in knowing and perfect loving of God, which is when a man’s soul is first reformed by perfection of virtues to the image of Jesus, and afterwards, when it pleaseth God to visit him, he is taken in from all earthly and fleshly affections, from vain thoughts and imaginings of all bodily creatures, and, as it were, much ravished and taken up from his bodily senses, and then by the grace of the Holy Ghost is enlightened, to see by his understanding Truth itself (which is God) and spiritual things, with a soft, sweet, burning love in God, so perfectly that he becometh ravished with His love, and so the soul for the time is become one with God, and conformed to the image of the Trinity.
The beginning of this Contemplation may be felt in this life, but the full perfection of it is reserved unto the bliss in heaven. Of this union and conforming to our Lord speaks St Paul thus: Qui adhaeret Deo unus spiritus est cum eo; that is to say, he who by ravishing of love is become united to God, God and that soul are not now two, but both one. And surely in this oneing consisteth the marriage which passeth betwixt God and the soul, that shall never be dissolved or broken.
Walter Hilton (The Ladder of Perfection – Book I: Chapter 8)

Learned men and great scholars have devoted great effort and prolonged study to the Holy Scriptures… employing the gifts which God gives to every person who has the use of reason.
This knowledge is good… but it does not bring with it any spiritual experience of God, for these graces are granted only to those who have a great love for Him. This fountain of love issues from our Lord alone, and no stranger may approach it. But knowledge of this kind is common to good and bad alike, since it can be acquired without love, … and men of a worldly life are sometimes more knowledgeable than many true Christians although they do not possess this love. St. Paul describes this kind of knowledge: “If I had full knowledge of all things and knew all secrets, but had no love, I should be nothing.”
Some people who possess this knowledge become proud and misuse it in order to increase their personal reputation, worldly rank, honours and riches, when they should use it humbly to the praise of God and for the benefit of their fellow Christians in true charity. St. Paul says of this kind of knowledge: “Knowledge by itself stirs the heart with pride, but united to love it turns to edification.”
By itself this knowledge is like water, tasteless and cold. But if those who have it will offer it humbly to our Lord and ask for His grace, He will turn the water into wine with His blessing.
Walter Hilton (The Ladder of Perfection – Book I: Chapter 4)